PECORINO is not just a cheese, but a grape that almost went extinct!

Both Pecorino the cheese and Pecorino the wine are named after the abundant sheep and the sheep herders who roam the hills looking after them.

Native to Sibilini in the mountains of the Marche region of Italy, Pecorino was first mentioned in 1875 yet, the grape was abandoned and replaced by the more productive and easier to grow Trebianno (which I wrote about yesterday and you can read here).

In 1980, the grapevine was found in a vineyard and rescued.

Today you can find it being grown in both Marche, its native home, and in nearby Abruzzo which I wrote about yesterday.

Pecorino continues to be a difficult grape to grow: in addition to low productivity, it ripens so early in the season that it needs a cooler microclimate to have acidity as well as time on the vine to have complexity. 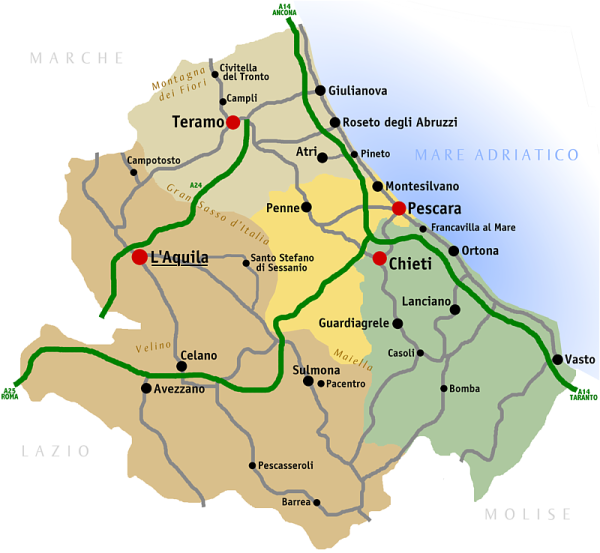 Fortunately, as you can see from the maps above, le Marche and neighboring Abruzzo have plenty of coastal climate to offer to Pecorino to bring out its famous notes of candied orange and tropical fruit. Abruzzo is also famous for being “green” from the rivers that cut through from the mountains through the hills where the wine grows.

More fun facts about Abruzzo from a press release:

The name Ferzo refers to patches of fabric stitched together to create a sail, is a union of the finest viticultural ‘patches’ of southern Abruzzo, hand harvested from 20-year-old vines. We wrote about their Montepulciano here. Ferzo is part of the Codice Citra family of wines that are estate grown and bottled from a collection of family-owned vineyards in the lush and various microclimates of Abruzzo’s Chieti province. Vineyards stretch from north to south along the Adriatic coast and east to west from the sea to the hulking Majella Mountain, the range of climate and topography express the unique terroirs and microclimates of the region. The Codice Citra Wines are imported by the Winebow Group.

Palate: Wet stone, lime, most of the flavor comes at the back of the palate with a crazy white pepper finish, the subtlety of the wine lingers for a long time. It is very clean and complex. There are no one word descriptors for this wine; there are many unfamiliar qualities to this wine, maybe even a bit of saffron unless that is just an association with the famous spice that grows here!

Pairing: Sue was surprised at how well the Pecorino cheese went so well with the wine. It created a nice long lingering finish that elevated both the wine and the cheese. Fantastic with a creamy marinated goat cheese. With our Fresh Shrimp pasta this wine was over the top and excellent with pasta carbonara as well. Fantastic with our salad dressed with a little lemon olive oil and balsamic vinegar.

Learn more about Pecorino by joining our twitter chat at 8am Pacific by following the hashtag #ItalianFWT.

Camilla from Culinary Adventures with Camilla will dazzel us with “Oven-Roasted Trout with Citrus Salsa Crudo + 2017 Lunaria “Civitas” Pecorino”.

Lauren at The Swirling Dervish asks “Looking for a New White Wine to Serve this Spring? Try Pecorino from Tenuta Santori in Italy!”.

Jeff at Food Wine Click goes “On the Hunt for the Pecorino Grape”.

Jennifer at Vino Travels discovers “Grape of the Sheep with Umani Ronchi Pecorino”.

Kevin from SnarkyWine shares “Pecorino – Welcome to the Fold”

Lynn at Savor the Harvest is “Discovering the Pecorino Grape #ItalianFWT”