Since Copper River Salmon is currently available, I thought I’d repost this article from two years ago to remind you to enjoy some CRS while it is in season.

Read on for more about CRS paired with a Babich pinot noir from New Zealand and a Vino V pinot noir from the Santa Barbara area. We also tasted the wine with difference musical selections to see how the aural experience changed out palates.

Get your CRS while you can and enjoy it fresh with a pinot noir or try a Washington merlot! It’s also fabulous with The Ojai Vineyard’s Red (pinot-syrah blend) or White (currently a blend of 41% Riesling, 31% Chardonnay, 28% Viognier)–I tried them both on Friday night, and while they’re both winners, I preferred the more earthy, richer Ojai Red over the minerally Ojai White; both retail under $20.

Looking for something bubbly and cold to pair with your CRS? Try a sparkling rose.

A month or so ago I went to a tasting at Paradise Pantry in downtown Ventura where Vino V winemaker Michael Meagher showed off his chardonnay, his Confundido blend, his pinot noir, and his syrah. I knew the syrah and even used it for the Wine Blogging Wednesday North vs South Challenge, so I was excited to experience the others. At a rushed tasting that night (we had a documentary on loons we’d planned to catch that night and we were on bikes), I … Read More

A month or so ago I went 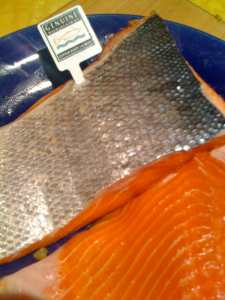 to a tasting at Paradise Pantry in downtown Ventura where Vino V winemaker Michael Meagher showed off his chardonnay, his Confundido blend, his pinot noir, and his syrah. I knew the syrah and even used it for the Wine Blogging Wednesday North vs South Challenge, so I was excited to experience the others. At a rushed tasting that night (we had a documentary on loons we’d planned to catch that night and we were on bikes), I loved the chardonnay because it was NOT overwhelmed by oak, and I was super impressed by the pinot which means a lot because I’m not always impressed by California pinots. I knew when it was wild salmon season, I wanted to pair it. 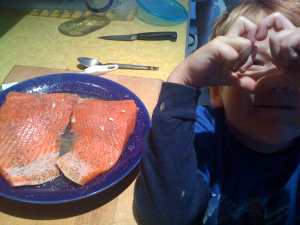 Fast forward to Copper River salmon season, those fleeting, magical few weeks in early June which I wish would last for months, but this year may even be shorter than the typical Memorial Day weekend to Father’s Day or sometimes July 4th weekend. The Copper River salmon season lasts as long as the allotment, and this year the allotment is so small that Von’s won’t even commit to having it one day to the next; when they have it, it’s $29.99 a pound unless you’re a Vons Club member which means it ranges in price from $8.99-15.99. Right now it’s $12.99. Typically we prepare it simply: some olive oil, salt and pepper, a squirt of fresh lemon then cook it on the outdoor grill. 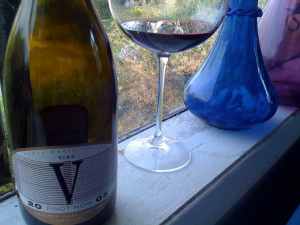 So when I learned that Gonzo Gastronomy’s Wine Blogging Wednesday #58 Prompt “Now I’m waiting for Wednesday, waiting for Wednesday…” was to do a tasting under different musical influences, I thought: FUN! Then I thought: Gotta get some of the Vino V pinot and taste it with some Copper River salmon and then sit around and listen to music! (This is how I broke the news to the Big Monkey–you be my dj and I’ll be your dancer and we’ll both do the drinking! You can imagine this suggestion was greeted with enthusiasm!)

Just to make it more interesting, and because I’ve become quite fond of NZ pinot noirs following the Wine Blogger’s Conference last October, I opened a bottle of Babich 2004 Lone Tree which I found on clearance for $8 at Vons. It typically retails between $15 and $20. 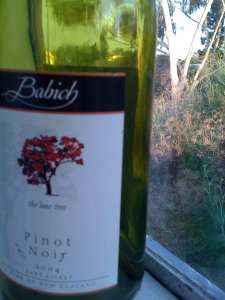 The Vino V has super limited distribution but since they’re local, I was able to pick up a bottle that night from winemaker Michael Meagher who was hosting a winemaker dinner at one of our favorite restaurants, Brooks.  It typicaly retails between $40 and $45 but for members of their email club, it’s 10% less or on special at $35 which is what I bought it for.

While we were preparing our dinner, we of course opened the wines and snacked a little on some simple wheat and flax organic crackers from Trader Joes. The Babich was room temperature rather than cellar temperature like the Vino V, which was especially important to the Vino V since it is 14.5% while the Babich is 13.5%.

At first there were many characteristics that we really liked about the Babich, and we liked it even more after we chilled it down a bit: it has a nice, earthy character, a generous nose, and surprising depth and complexity with notes of eucalyptus and truffle. We liked it with our simply prepared salmon, brown rice, fresh squash, and stuffed portabello dinner. But as the meal and the evening progressed, it seemed to grow harsh, and flat while the Vino V flourished. It was significantly more flavorful and complex–flat out more enjoyable, begging us to refill our glasses. It had plenty of flavor and character for our meal yet didn’t overwhelm the salmon either. The wine comes across balanced and has a lovely finish. 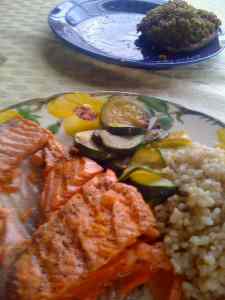 The next stage was to fullfill the legacy of the prompt: to taste the wine with various musical offerings and see how that changes the experience of the wine, enhancing or degrading it.

Honestly, it’s hard for me to imagine a wine such as this as ever being distasteful. But we did find that our experience of the wine changed depending on the music. Our musical choices ranged from Bruce Springsteen to Frank Sinatra to a spoken word piece of mine with music I arranged:

The bottom line on this prompt is that we really enjoyed selecting music from our hard drive, clicking play and then tasting the wine and talking about it and the music. This is one experiment we will do again!

Here are some really rough notes of the Vino V pinto noir with various musical pairings as well as the original prompt: END_OF_DOCUMENT_TOKEN_TO_BE_REPLACED