Most people know that Sicily is the ball at the tip of the toe of the boot of Italy. While only three miles separates the island of Sicily from the mainland of Italy, Sicily has long had its own separate culture — and

Sicily has 68% indigenous vines that thrive along the coasts and on the slopes of the most active volcano in Europe, Mount Etna, which set off a plume of ash on February 18, 2019:

As I learned during from Vinitaly’s Italian Wine Ambassadors course in Los Angeles this February, people have lived on the island of Sicily since 12,000 BC. Three tribes thrived there until they were absorbed into Greek culture. While the Greeks may have left the most famous and well-known sites we see today, Sicily’s accessible location there in the Mediterranean means many groups have influenced the culture and the cuisine. These groups include:

Popes left their imprint, as well as Muslims. You’ll find blonds in Sicily following the Normans 1066 battle of Hastings. For a period, the island held huge feudal estates and lords with underlings doing the farming.

While today most of Sicily is planted in vines with 100k hectares — more than in any of the other 20 regions of Italy — production dropped significantly following phyloxera and only began to rebound in the 1980s with increased investment. This is in contrast to the other regions where there was more money to replant earlier and the decision was to invest in international varieties like Cabernet Sauvignon rather than the indigenous ones.

The result? Today 68% of plantings on Sicily are indigenous grape varieties.

I was amazed to learn that only 5% of Sicily’s wine is bottled and only 2% has a DOC designation.

More importantly, of the almost 100k planted in vines, 21K hectares are grown sustainably making it the Number One region in Italy.

Sunny Sicily has the longest harvest of anywhere in the world — 90 days with Chardonnay harvested first in August.

In terms of terrain, Sicily is located on the African plate where it abuts the Eurasian plate:

That meeting of the plates is what contributes to Mount Etna’s nearly 11,000′ height as well as activity which you can watch on this webcam. The Greeks, however, said that  Typhon, a deadly monster Zeus trapped under Mount Etna, caused the eruptions. This is also the location, they said, of the forges of Hephaestus.

Etna erupting ash from NE crater as seen in February 2019 from Lipari (one of the Aeolian Islands to the north) during extremely clear weather (image: Emanuela Carone / VolcanoDiscovery Italia)

The volcanic basaltic soils have a sandy texture similar to coffee grinds; the island also has sedimentary areas of marine origin and metamorphic areas.

Mount Etna is like an island on an island — it is that distinct!

This month, the Italian Food Wine Travel group of online influencers is investigating the Island Wines of Italy with host Jill Barth. I had actually suggested it because I loved the alliteration of of “Island Wines of Italy” and we’ve become such fans of the wines of Sicily that we wanted to learn about the wines of the other islands too — and what are those other islands anyway? But we ended up deciding to focus on three from Sicily, a white, rose, and a  red:

which we paired with a wide range of mini-pizzas. Fun!

Originally nerello di mascalese was vinified as a white wine using foot treading and palmetto. The resulting wines have high levels of tannin while not darkly colored. Today you are more likely to find it as a red wine, but it was fun to find this one!

Nose: I felt it delivered best in the Pinot grigio glass; I found red stone fruit while Sue noticed grass up front, with hints of licorice or fennel.

Palate: This is not a super complex wine or super fruity. Not too fruity or with any one distinct fruit — we found cherry, watermelon, strawberry. It has a bit of tartness with good acidity. Overall, this is a very pleasant wine that’s easy to drink for $4 and best when it has a good chill on it.

Pairing: Great with the sautéed shrimp and garlic pizza, Sue absolutely loved the fresh rosemary Canadian bacon, and asparagus. Sue felt that it wasn’t that great with our brie, pear, asparagus pizza, the pear was a bit to sweet for it, it was so much better with the Etna Bianco. It was also nice with the pesto, sausage pizza. It wasn’t fabulous with the margarita pizza, it wasn’t awful, but went so much better with others.

I did not know before that there is a Greek Goddess of the morning dew, or that her name is Erse. The wine’s name pays tribute to “the time of day when this dew-kissed vineyard is the most picturesque.” It’s fermented and aged in stainless to showcase the unique terroir of Mount Etna that brings forward fresh fruit and minerality. Carricante is considered riesling-like and comes in sparkling and still wines as well as showing up in blends.

Color: Straw with a clear rim.

Nose: Earthen funk, a little bit of sulphur, like volcanic rock or soil, just a bit of eureka lemon, some pear.

Pairing: We chose to pair this wine with our sautéed garlic arugula pizza. When in a chardonnay glass, it delivers more oomph to pair with this pizza, with the reisling glass it accentuates the nose, but does not stand up as well with the pizza, where earlier it is a nice wine with this pizza. It loved the pesto sausage pizza, the nutmeg in the italian sausage was present when pairing it with the wine. The sausage and pesto brought out a nice creaminess in the wine and tamed down the acidity a bit. The wine was also quite nice with the brie, pear, asparagus pizza.

I was able to taste the wine over a few days and was impressed that it just kept on improving in complexity and more fruit came forward. A truly fascinating and complex wine; I hope I can try more wines made from this fruit!

Might California be a great place for carricante? Eric Asimov says in a 2016 New York Times article that  Kevin Harvey thinks so — and he’s set to see how it does at his Rhys Vineyards in the Santa Cruz Mountains of California. Asimov reports that Harvey finds carricante to be “one of the world’s great white wine grapes.” While his soils aren’t volcanic, many in California are. 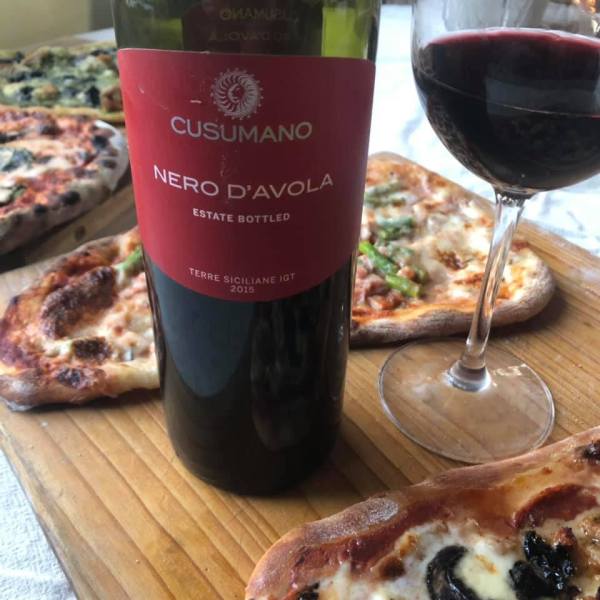 We have written about wine from Cusumano as well as included it in a post about three neros from Sicily, however tonight it seemed really prime for our meal.

Nose: You don’t always think about opening up an inexpensive bottle of wine to breathe, but this wine does open up very nicely, plum raspberry, rhubarb, bright fresh fruit. the nose on this wine is very exciting.

Palate: Rhubarb really comes through on the palate. sweetness of stewed fruit without the sugar, lemon finish

Pairing : This is truly a great pizza wine; it loved the red sauce and so many of the toppings. It was so great with the Canadian bacon, asparagus pizza, superb with the soprosetto, olive, mushroom, sausage pizza. It was perfect with the margarita pizza, also fantastic with the Canadian bacon, fresh rosemary and asparagus. We were really drawn to the mozzarella pizzas and this wine rather than the brie pizza.

The Italian Food, Wine and Travel (#ItalianFWT) writing group has congregated around the topic of wines produced on Italy’s islands. You can find the invitation post here. Please join me and the following writers as we share the process of writing our stories, rich with details about the food, wine and trips that inspired us.

16 thoughts on “Island Wines of Italy: 3 from Sicily paired with pizza #ItalianFWT”