panelle by candlelight — and flashlight!–with wine from Sicily

What do you do when the power goes out in the midst of preparations for a dinner featuring wine and recipes from Sicily?

You stay calm and carry on of course!

Which is what we did –with no regrets except that I don’t recommend trying to shuck oysters in the dark. (No, I am not going to show you the jab wound I got!)

With a deadline looming for this month’s Italian Food Wine and Travel group to write about Sicilian wine and food pairings, we didn’t have too many options. So we went for it! (Scroll down to the bottom to read about the group’s recommendations).And other than the oyster shucking mishap and photography challenges, we persevered and in about 90 minutes the power came back on.

We certainly weren’t going to let something like a power outage deter us from learning more about the fascinating wine and cuisine of Sicily! Over the past few years, I’ve been blessed with getting wine samples from Italy and I’ve been able to attend a number of trade tastings in Los Angeles which has led to my developing a deeper understanding and certainly an appreciation for Italian wine, and especially the wine and cuisine of Sicily. Three years ago, I am not sure whether I had tasted a Grillo or a Grecante or a Carricante or even a Nero D’Avola, and now I’ve gotten to know several, and as I’ve developed knowledge and confidence, during the past six months, we’ve posted regularly about Italian wine and cuisine (for example, see here or here or here). 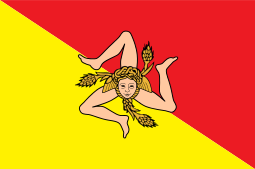 Trinacria means triangle and refers to the shape of the island of Sicily which was known by the Romans as Trinacrium, meaning “star with three points”. The Trinacria symbol is the head of Medusa (a gorgon with a head of snakes), surrounded by three bent running legs, and three stalks of wheat. Due to the island’s distinct triangular shape, the symbol has also been adopted by the Sicilian government and is located on the center of Sicily’s flag.

Last summer we had dinner at a Sicilian restaurant in Los Angeles, Sotto, with Diego Cusumano of Cusumano Winery from Sicily where we experienced some fascinating and inspiring cuisine. So naturally, I contacted Will Rogers at Terlato to find out if he had anything interesting for us from Cusumano that we could use for this post, and he sent us a red Nerello Mascalese and a white Carricante from Alta Mora, both made from indigenous grapes. Both wines are grown high on the hillsides of an active volcano, Mt Etna:

“Alta Mora from Sicily, a region that is re-emerging as one of the most exciting wine regions of Europe, notwithstanding its ancient wine culture (in Homer’s Odyssey, Odysseus gets the cyclops, Polyphemus, drunk on Sicilian wine before blinding him in his single eye and escaping, and in Roman times, the Sicilian wines of Mamertinum, Tauromenitanum and Populatum were all celebrated for their quality). A region, that surprisingly produces more white wines than reds. 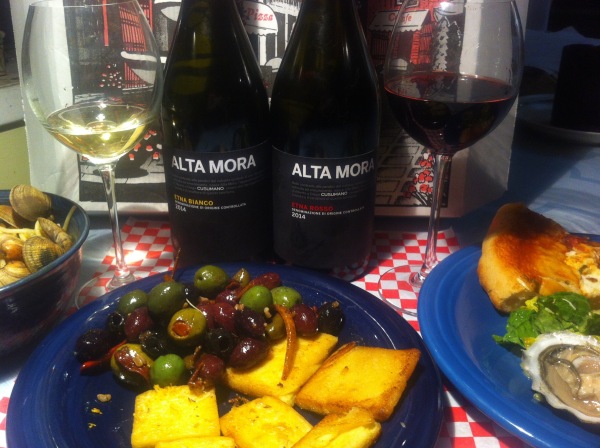 For this midweek dinner, we wanted to keep it simple and yet authentic to Sicily as best we could, and showcase some easy yet tasty recipes. We wanted to try to recreate two appetizers we’d enjoyed, panelle, a chick pea flour fried bread that is sprinkled with lemon zest and fresh grated parmesan similar to something we’d had at Sotto, and harrissa spiced roasted olives which had wowed us at Wolf. The harissa spiced olives reflects the mediterranean and exotic flavors and influences on Sicilian cuisine while panelle is a classic Sicilian street food popular in Palermo. Panelle are like a fritter made from chickpea flour and other ingredients are thought to be of Arabic origin according to Wikipedia. Here’s a basic recipe for how to make panelle from Mark Bittman on the New York Times.

We loved our fresh panelle with lemon and parmesan! And warm, roasted, spiced olives – our new revelation! Why would you ever eat them cold again when they are so incredible warm!

Sicilian cuisine often uses lemon, garlic, and anchovies, so ceasar salad was an obvious choice, and we knew it would pair well with the white wine. Pizza also was on the menu as Cusumano had  sent along this great pizza kit and we made it in the Sicilian style with a thick crust. Whole foods makes a very nice pizza dough, which is super easy to pick up and make for a superb pizza dinner. As much as I love anchovies, I’d never had them on a pizza!  So we did one pizza with olive oil and garlic with mozzarella and another with pizza sauce, cheese, and salami and pepporino sliced into very small strips. The white pizza was by far our favorite, even though the red pizza went beautifully with the Cusumano red.

We love, love, love the Cusumano pizza system! The pizza got so beautifully browned and crisped on the bottom.

Our main course was pasta all vongole — pasta with clams. We also learned that Sicily is where pasta originated! For desert, Sue picked up canolli shells which she stuffed with ricotta cheese mixed with powder sugar and mini-chocolate chips.

I’m not sure but I don’t think I’d ever had the wine grape “carricante” before. It has a bright nose full of floral and fruit, the color is pale, and on the palate it has plenty of acidity, plus fruit and saline, light crisp with complexity, very smooth. It was made in stainless steel and then rests on lees (spent yeast) so it is not heavy on the palate. Hints of citrus, meyer lemon, grapefruit, lemon curd, then there is the floral characteristic to it too: jasmine, honesuckle, white flowers. Nice and clean, very fresh and refreshing. Perfect for al fresco dining.

The Carricante wine went so well with our appetizers, the garlic pizza, and the clams. The lemon rind that garnished the chickpea fry bread accuentiates the wine.  Kumamoto oysters especially brings out the citrus in the wine and the wine brings out melon in the oyster. The warm olives with harissa seasoning and orange peel with rosemary also went quite nicely with this wine. It goes well with the salad: the citrus notes in the wine go well with the lemony flavors of the salad dressing. The wine is a nice off set to the bitter, citrus notes in the ceasar salad.

We really like this wine and we certainly want to seek out more examples of this grape! If you like pinot noir, you will likely go for this wine too. (And speaking of Pinot Noir, I’m on my way to Day 2 of World Of Pinot Noir at Bacara in Santa Barbara!)

Pretty color, classic ruby red color ruby sapphire, with a translucence that is really  pretty with the rim translucent as well. The perfume is really pretty also: rose and rose geranium and carnation; sweet potato too.

When we drank this after eating a bite of cesear salad, it brought out herbal notes that were very pleasurable but were not in the salad at all  almost a cilantro  or thai basil changed it but in a very interesting and pleasant way. You can drink this red wine with the caesar salad because as we’ve seen in other examples, these sicilian wines tend to work really well with lemon

According to their website,  “the Alta Mora name represents the great heights of the vineyards on Mt. Etna and the dark, black volcanic soil. The volcano itself is nearly 11,000ft high and vineyards are planted up to 4,000ft high. Alta Mora Etna Rosso is 100% Nerello Mascalese, a grape varietal indigenous to Sicily and the predominant red grape of Mt. Etna. Many wine enthusiasts compare this wine to a Nebbiolo or Pinot Noir. The deeply colored, thick-skinned grapes contribute gritty tannins and vibrant acidity.”

Dessert – Cannoli of course! Super easy dessert if you buy the shells!

Join us from 8-9am PST for our monthly twitter chat! See what others discovered in Sicily!

9 thoughts on “Sicilian Food and Wine By Candlelight for #ItalianFWT”