UPDATE: This article is about who won the 2021 World Wine Tasting Championship. If you are looking from who won 2022, go here.

Who Competed for Team USA? What wines were tasted? And what’s that lawsuit all about? I’ll do my best to answer these questions and more starting with who won by identifying the most wines “blind”! At the World Wine Tasting Championships organized by La Revue du vin de France and held today at Chateauneuf-du-Pape, France, the winning team scored an astounding 166 points! And which team took the trophy and wines home to which country?

It seems they took an early lead,

In 2021, France with Pascal Piednoir (Capitaine), Pierre Rey, Nicolas Barrault and Bruno Oechslin actually came in 6th place with 114 points, even though the contest this year featured four French wines out of the twelve in the contest (more on the wines below). Competitors this year clearly found the contest easier; in 2019, the year I competed,  France won with 112 points and China came in second with 103 points.

In case you are new to this topic, in this contest of skill and teamwork, up to four tasters plus a coach make an educated guess what’s in the glass: the grape, the country, the region, the producer, and the vintage. Varying numbers of points come with each designation, and winners typically come in between 100-125 points depending on how difficult it is that year– whether the wines veer far outside the norm. Typically there are six white wines and six reds; the contest often starts with a sparkling wine and ends with a sweet one. In previous years, the selections included wines from around the world, but generally more Euro-centric with two wines from host country France.

Once again, because of COVID concerns, organizers planned for the competition to have two stages as I explained here. All teams sampled eight wines, and the top teams moved on to the next stage with four more wines.

This year the wines included Baga, a red grape from Portugal, and four wines from France including  three Pinot Noir and not a one from the host region, Chateauneauf-du-Pape. Scroll down for more details on all twelve wines.

So how did the other teams do in this blind tasting contest?

NOTE: It is my understanding that only the top 10 teams went on to compete and taste the final four wines which would mean the teams below did not have a chance to improve their scores with the rest of the wines which would also explain how the winning team could have 100 points more than the American team.

If anyone from any of these teams ever comes to southern California, please let me know so I can share my local wine region with you! 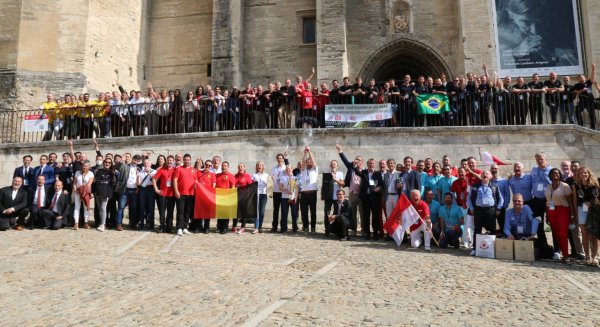 What about the wines?

Team USA coach prepared us by saying there wouldn’t be any sparkling wine in the contest so not to worry about that — but we went to Champagne anyway! Read about our vineyard visit with Vincent Charlot here. Of course in 2019, there was a sparkling wine and it was CAVA. I’m doing a tasting this Wednesday of three, and Cava is a category I’ve been working on for sure after it stumped Team USA in 2019. Bollinger is a wine I know well — a favorite I’ve written about a few times! In fact I think I’ll open a bottle of this tonight to go with my oysters and fresh ridgeback prawns I bought this morning from the fisherman who caught them yesterday!

Oh my! While these may sound unusual, we’ve been tasting and writing about Chardonnay from Australia lately — it’ super distinct and interesting.

This is a wine to track down and get a sample of! How interesting — I think I’d know Chenin anywhere but one from Mendoza? Fascinating!

I suspect this is a new grape! How fun! I need to track this one down. I have lots of Portuguese wine to write about as soon as I’m done writing about all my Slow Wines. I need to do this one too!

So after wine 6, did they take a break to calculate scores and determine who would go on to the finals? This Gruner seems odd to follow the red blend.

Everyone should have gotten this one; forgiven if they got the region wrong though!

So there’s THREE Pinot Noir in this tasting? This one has to totally be there to trip people who have coaches like Team USA where we were told no more than one wine from any one country (then later told oh except for FRANCE) and there would be no doubles etc etc.

Ahhh, nebbiolo! Here’s a lovely vegan biodynamic one we wrote about last September.

I think I have a sample of this wine right now waiting for me! Maybe it’s not Gil Estate but that region. Here’s what we did about Aragon recently; those sandwiches were divine.

FOUR WINES FROM FRANCE! Three Pinot Noir! Count them! And ending with Jura! How fun! We’ve written about Jura a few times; here’s the most recent.

Notably, it’s easy to second guess how I might do from here at home, by myself, without all the chaos in the room and the tension. But I suspect if the team of women tasters we had proposed to organizers had competed we would have made it into the finals.

So what about that lawsuit?

So what about it?

6 thoughts on “Who Won 2021 World Wine Tasting Championship, Who Competed for Team USA, and A Lawsuit”