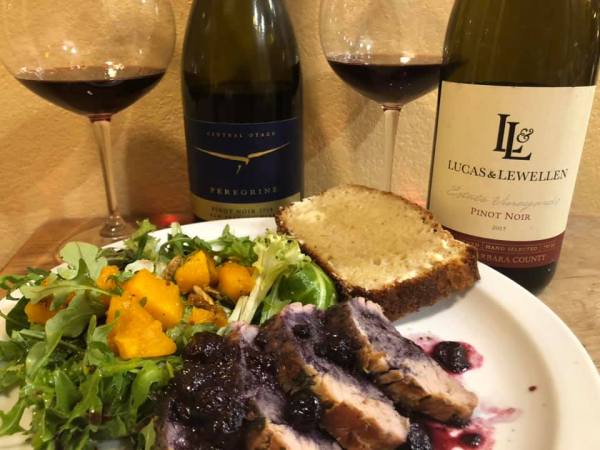 Like many industries, the wine industry is dominated by males. That presents challenges to women in wine, whether they are owners, winemakers, vineyard workers, or in other roles. As more and more females join the industry, it becomes easier. Often these women come from the wine industry– it’s the family business as pointed out in “#ClinkDifferent: 4 Affordable Red Bordeaux Paired With Instant Pot Oxtail Beef Bourguinonne” where three of the featured wineries have women running the show.

For women winemakers Nadine Cross of New Zealand’s Peregrine and Megan McGrath Gates of Lucas & Lewellen, farming is the family business, and it is through their love of the land that they’ve come to love vine and wine. Today we explore a pinot noir from each. Stay tuned for a feature on pinot noir from Megan Gunderson of WALT; she’s director of winemaking for an enterprise that makes wine from Oregon to Santa Barbara!

Farming is very grounded endeavor, and according to her bio, “Megan is fascinated with the natural sciences — rivers, mountains and the ocean, which led her to become enthralled with geology. She wanted to know how the landscape was sculpted above and below the earth’s surface.”

Naturally, this fascination took her to Cal Poly in San Luis Obispo where she earned a B.S. in Soil Science with a concentration in vineyard soils. Today Megan promotes soil conservation for agriculture with the Cachuma Resource Conservation District and works as a soil scientist with the Integrated Wine Growing Consortium who analyze soils for future vineyards.

This love of soil gives her a ground-up perspective on winegrowing: “We make many decisions during the growing, fermenting and aging stages, but ultimately the grape has to express itself and that starts in the soil” says her bio which also states that she believes in “balanced wines with all components married together so that layers of complexity are allowed to unfold.”

It’s hardly surprising that Megan McGrath Gates would find home in the soil sciences. Here in Ventura County, the McGrath name is familiar to most people. I grew up with Marty McGrath; my dad coached him on various teams and we graduated in the same class at Buena. People passing through Ventura County from LA to Santa Barbara on the 101 could easily stop by at the McGrath family farm for fresh produce.

As an eighth generation Californian, Megan McGrath Gates traces her roots back to the pioneering Olivas family; many visit the beautiful Olivas Adobe in Ventura, an adobe structure built in 1841 by Raymundo Olivas on the north bank of the Santa Clara River about a mile from the estuary where it flows into the Santa Barbara Channel. Today it’s managed by the City of Ventura and offers docent led tours and other events.

I was supposed to have lunch with Megan when she was in Ventura visiting but unfortunately I was sick and had to pass. Hopefully I will have a more personal interview with her soon either here in town or on a visit to the vineyards with her; we will be featuring her Toccata super Tuscan wine soon so stay tuned for that and she’s also making engaging Cabernet Sauvignon that I’m excited to discuss with her. 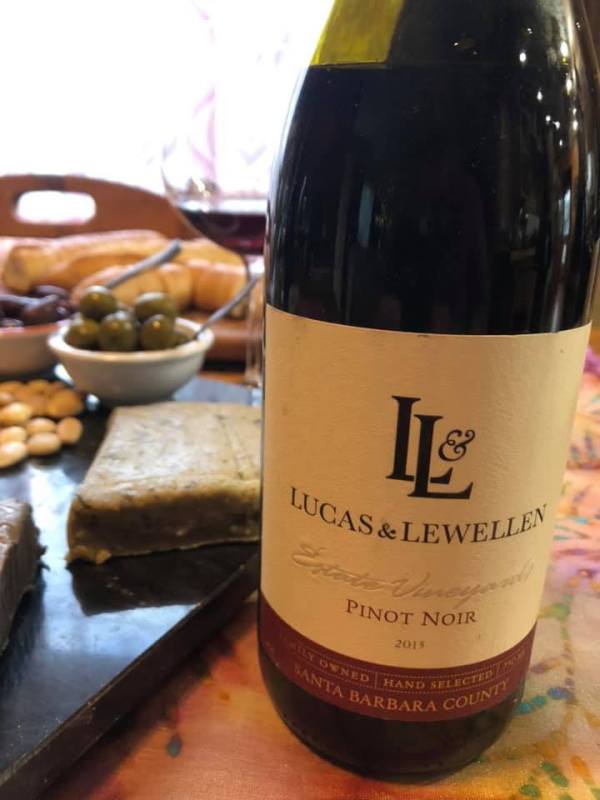 Megan McGrath Gates began making wine here in 2007 and became director of winemaking in 2013, so this is definitely her wine. But as I’m sure she’d agree, it is the meticulous care to the soils and the vineyards that gave her a foundation to work with. Renowned viticulturist Louis Lucas and Judge Royce Lewellen began Lucas & Lewellen Estate Vineyards decades ago to make the finest wine possible from their unique Santa Barbara County vineyards, like this one which is blended from hand-harvested grapes grown in the Lucas & Lewellen family owned Goodchild and Los Alamos Vineyards where the transverse mountain range brings cold ocean air from the Pacific into the coastal valleys, perfect for Pinot Noir.

Pairing: On one night I tried it with pork tenderloin, mushroom risotto, roasted squash from Sue’s garden, and salad with roasted squash, and on another, with  chicken marsala. It works well with these dishes, with nice acidity cutting through but also with enough richness to stand up to them. While it works well with pate and cheese, it’s a great wine for the price with a lovely meal.

Like Megan, for winemaker Nadine Cross of Peregrine Wines, in Queenstown, New Zealand, agriculture brought her to wine. Growing up on a sheep farm in a family with generations of farming experience, she studied accounting at university and worked as an accountant. Then her lifelong interest in the land led her back to school to study viticulture and winemaking.

“Initially I had the thought I would be involved in the financial side, but after doing a few harvests, there was no going back,” Nadine says.

The idea of cultivation and growth so central to agriculture play a key role in how Nadine tackles challenges, but in New Zealand, she  has found “that if you work hard it’s always been very inclusive with lots of opportunities. But here in New Zealand, we are such a young wine industry. Both men and women started the industry here and we all continue to grow it.”

Named in honor of New Zealand’s endemic falcon (Karearea in Maori), Peregrine celebrates its comeback from near extinction, and they sponsor the Wingspan Birds of Prey Trust, a breeding and rehabilitation project. Peregrine’s passion for the land and the species that live on the ground and in the air shows in their organic approach.

Palate:  Cherry, raspberry eucalyptus, nice acidity, tart finish that drops off rather quickly but other notes continue.  New Zealand Pinot Noir can be very light, but this one is quite complicated and intense.

Pairing:  Stands up well to the pairings: pate, chicken marsala, and pork tenderloin with plenty of complexity. They suggest pairing with roast pork herbs and fennel or a rack of lamb served pink, and we found the herbs in the marinade in the pork loin Sue prepared really hit the spot.

Cheers to women in wine this Women’s History Month!