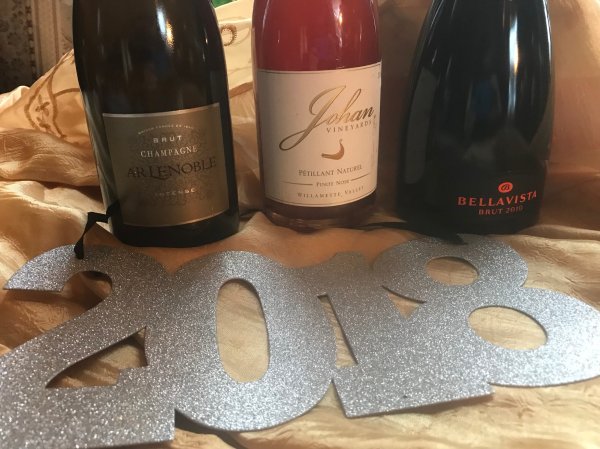 I hope you had a wonderful holiday season and a happy new year!

According to my calculations, I published 108 blog posts in 2017.

My goal was to publish at least twice a week on average, and I really wanted to publish a total of at least 108 posts (because, as my yoga teacher once told me, 108 is an auspicious number).

Most of these blog posts reviewed several bottles of wine, which means that it is likely that I wrote about somewhere upwards of 350 wines. Because my posts run long (between 1,500- 2,000 words), it is likely that I — with Sue’s help as scribe — composed well over 150,000 words on wine during the course of 2017.

Please remind me of that next time I complain that I really should be writing more.

And I tell you, I wouldn’t have gotten so many words on wine written without the help of Sue, who describes herself as merely the scribe but it is so much more. 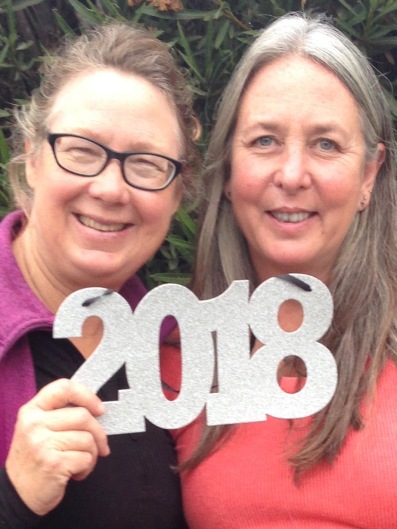 a quick, unplanned photo at the end of our first planning session in 2018

In 2017 there are certain patterns that I anticipate continuing in 2018; these form the basis of my New Year’s Resolutions for Wine Predator.

Sue and I find participating in these food and wine groups very stimulating and rewarding. Just as in poetry, having a constraint or a conceit can spur a writer to expand boundaries, so has participating in these groups. Each month we are prompted to write about certain topics, and this has led to discovering wines and cuisines that would not have come to our attention otherwise. It spurs us to research recipes, for Sue to expand her culinary expertise, and for us all to expand our culinary experiences. I learn so much! Over and over we’ve seen that certain wines pair well with certain foods, and that the cuisine of the region goes well with the wine.

We’ve also found some surprises, like when we made chicken mole tacos which we paired with French wine for the #Winophiles. 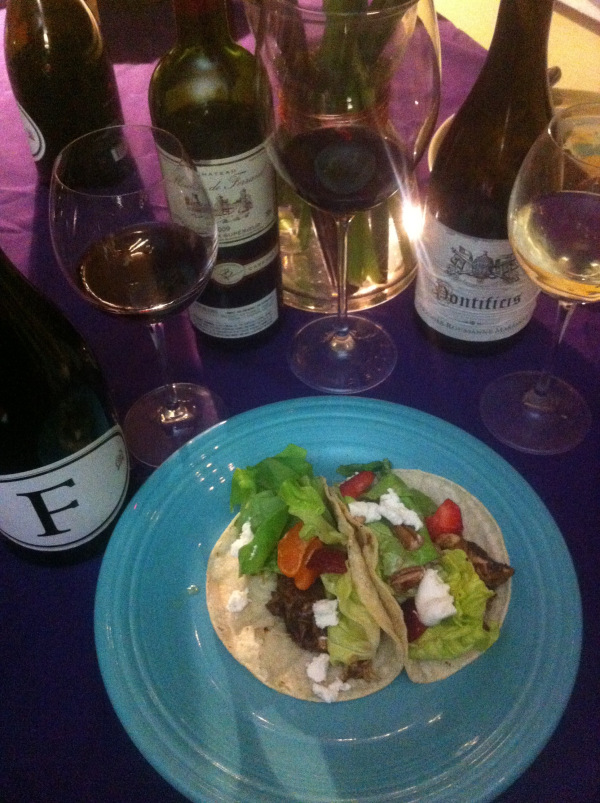 So what else went down? 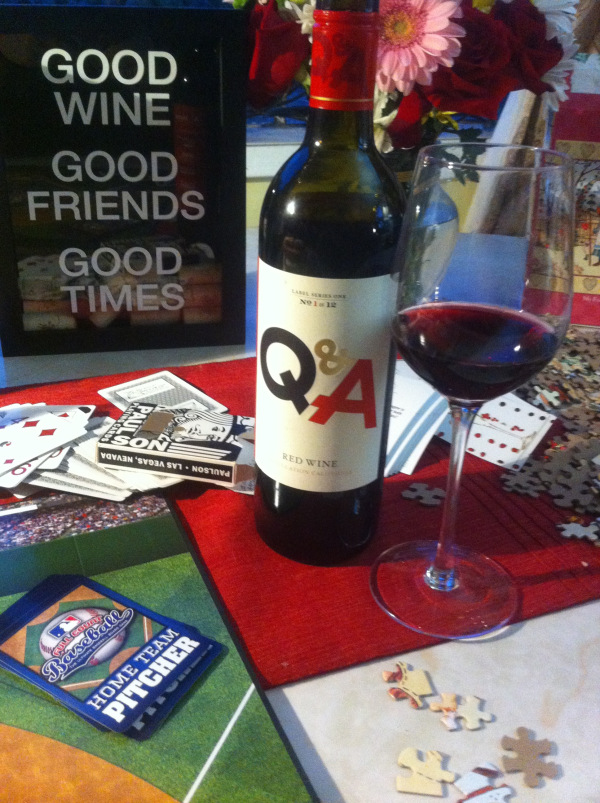 March (10 posts) started out with a bang when the power went out as we were working on our #ItalianFWT post and we had to complete our Sicilian pizza dinner by candlelight! In March we featured influential women in wine like Erica Crawford of New Zealand’s Loveblock, Lisa Anselmi of Italy’s Anselmi Wines, Floriane Eznack of France’s Champagne Jacquard, Merry Edwards, and Jessica Munnell of Mercer. In March, we also attended World of Pinot Noir as well as a press trip to learn more about WALT wines (more on the women there in 2018!).

Highlights of April (8) include the aforementioned chicken mole tacos for #Winophiles as well as a trip to Sta Rita Hills to do a deep dive into that AVAs Pinot Noir (admittedly my favorite!) 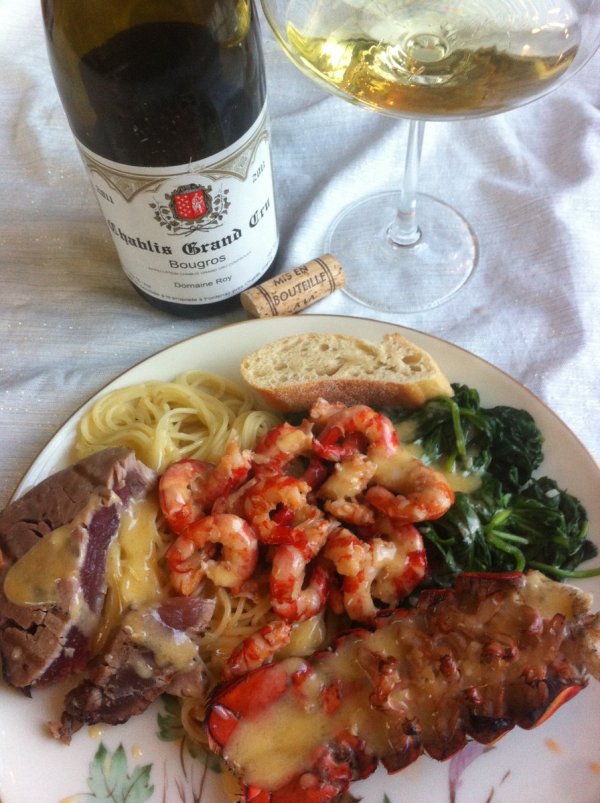 May was quite a month! Tied with June with the most posts at 14, Sue and I hosted #ItalianFWT ‘s sparkling wine event plus #WinePW’s brunch prompt, organized a blind tasting for Sauvignon Blanc Day, attended multiple press events in LA, and we wrote up a storm. I had a chance to be a little more playful in my posts about Oregon’s Philtrum and Idaho’s Hat Ranch, and Sue made a beautiful French meal for that month’s #Winophiles prompt on Burgundy.

These last three may be my favorite posts from 2018!

June (14 posts) saw us celebrating Rose Day, Lambrusco Day, and Dads and Grads– and I went on a press trip to Lodi!

In July (7 posts), we kept really busy: Sue and I spent an afternoon at Herzog with winemaker Joe Hurliman (which I wrote up in September), took a road trip to San Luis Obispo where we checked out the SLO Brewery Lofts (WOW!), stayed in Old Edna (WOW!), and on our third night we stayed in Cambria’s Dolphin Inn across from Moonstone Beach (WOW!). We also learned about pairing wine and cheese at Fromagerie Sophie. 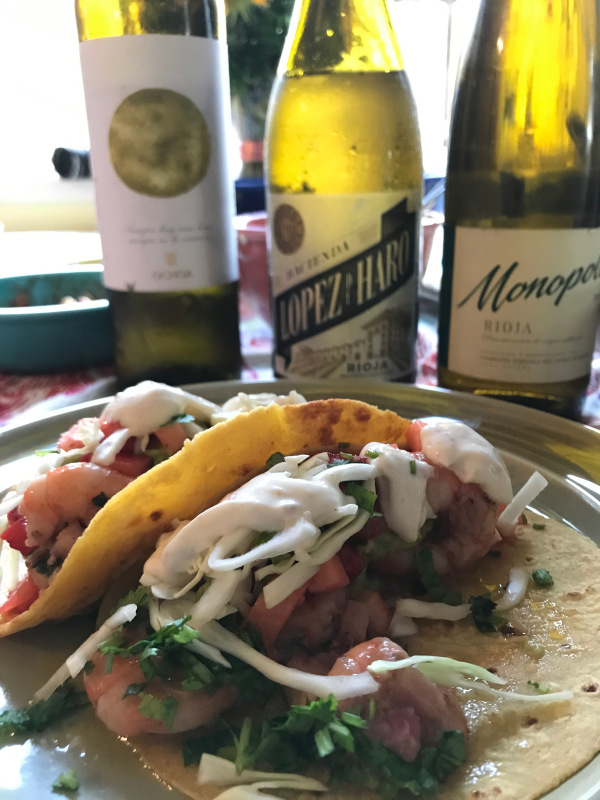 Plus Sue hosted a tie dye zinfandel tasting party where we celebrated the Summer of Love and we did an amazing Taco Tuesday with shrimp and Viura.

August (9) we celebrated Albarino Day, International Rose Day with wine from Chile in one post and rose from the Central coast in another, and for Prosecco Day we went to the beach and made a tower of 14 coupes!

Also in August we learned about the Alps and I collected FENNEL POLLEN to use and we made ELDERFLOWER liquor with flowers I collected from shrubs I planted nearly 20 years ago. 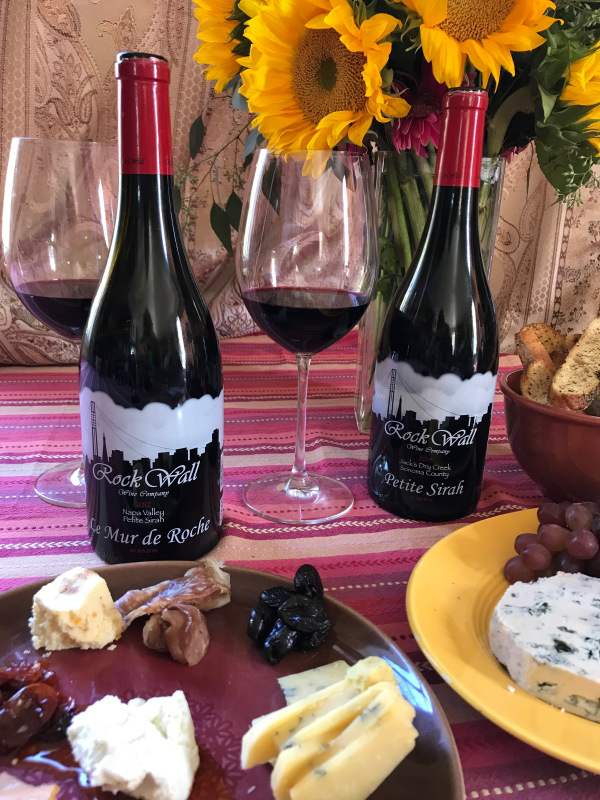 In September (8), I traveled three weekends: to Burning Man, to Napa and then Lake County for a retreat with a group of women in wine (yes wine tasting was involved!), and finally to Sacramento for the International Food Bloggers Conference and then to Eldorado County for a wine and food press trip, but I still managed to publish eight posts and host #WinePW’s Portugal event where Sue really out did herself by trying a new cuisine completely outside of her comfort zone using recipes from books I got when I visited. We also compared and contrasted Napa and Sonoma Petite Sirah from Rock Wall and  we wrote about Kosher wine and Herzog which has led to more opportunities to taste more Kosher wine in 2018. 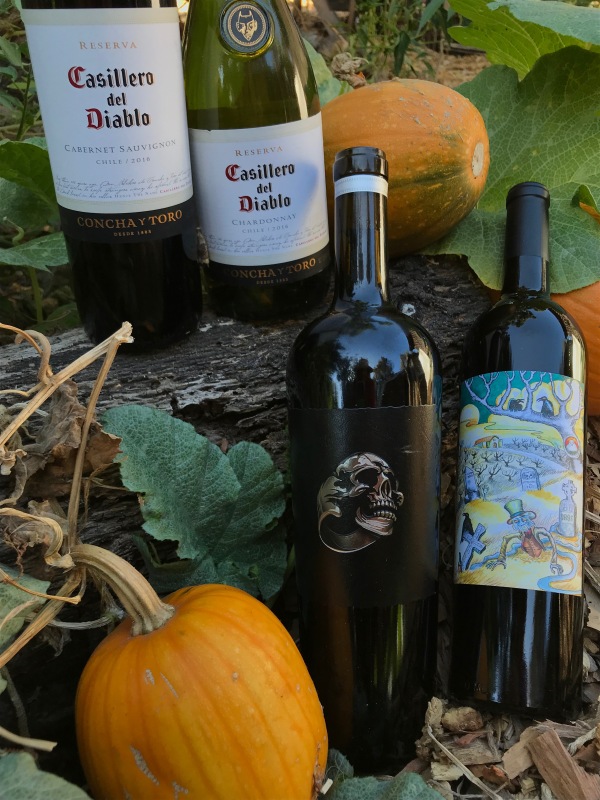 In October (10)  we celebrated #MerlotMe again with the #WinePW group — which continued to November 7’s Merlot Day and for #WinePW in November with duck breasts and Duckhorn Three Palms which was awarded Wine of the Year.  We also had fun with Halloween themed wines. 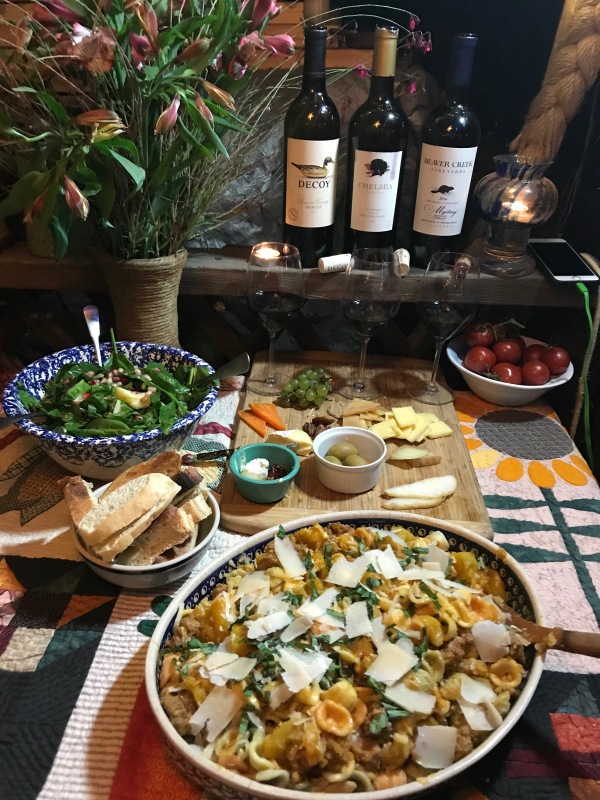 But the highlight of November (13 posts) — and possibly the year– was the Wine Bloggers Conference held in Sonoma (even though my accommodations were nightmarish to the extent that the Hyatt comped me two nights). I attended the Wine Tourism Conference before, then headed to Lake County again and then Mendocino County for a pre-conference excursion at Fetzer and Bonterra (which is the subject of January’s #WineStudio at 6pm on Tuesdays).  While I’d like to return to WBC and Walla Walla in 2018 (it was held there in 2010), not sure if I will be able to go. 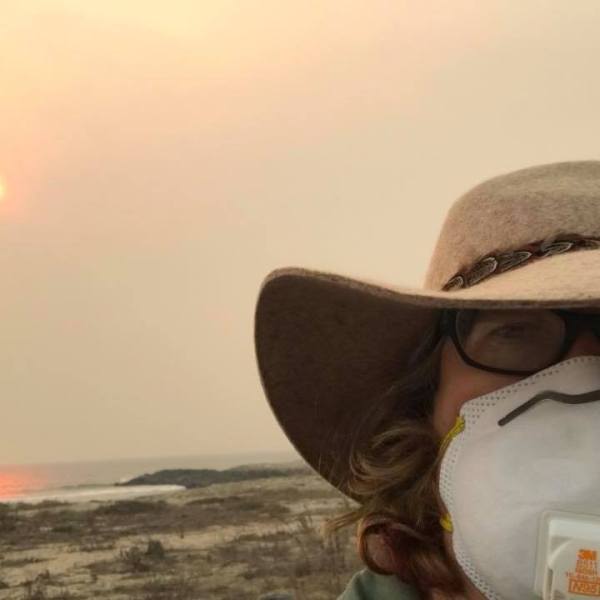 the otherworldly experience of the #ThomasFire in Ventura near my house

The low point of the year was the devastating fires that struck Sonoma, Napa, Lake, and Mendocino counties in October and then Ventura and Santa Barbara counties in December.  The fires came within a mile of both my house in Ventura and Sue’s home in Ojai. While we didn’t lose any structures to the fire, it sure made my family and I sick, and it certainly quelled our enthusiasm for wine tasting, and wine writing. But we bounced back to write about wineries in firestruck Napa: Cabernet from Silverado and Ehlers, and holiday wines from Flora Springs and Jon Nathaniel as well as a post about sparkling wine, one about Psagot from Israel, another about affordable Bordeaux, and more. Somehow,  I was able to publish 8 posts in December to complete the 108 for the year. 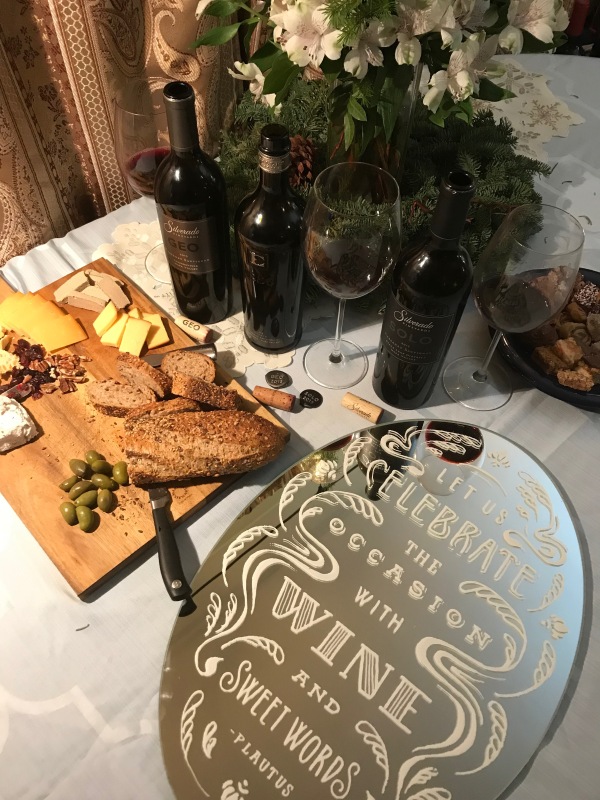 After reviewing 2017, it is hard to narrow down and pinpoint the highlights better than this, but here’s a few thoughts.

When I asked Sue about her favorites, she listed, in no particular order, our zin tie dye and the Sauvignon blanc events where a lot of people gathered at her house to compare notes on a number of wines, our #MerlotMe dinners at her house, and a few of our adventures in food and wine pairing– Portugal and Southwest France in particular. One of the more memorable events for her was working on three different blog posts and having the power go out! 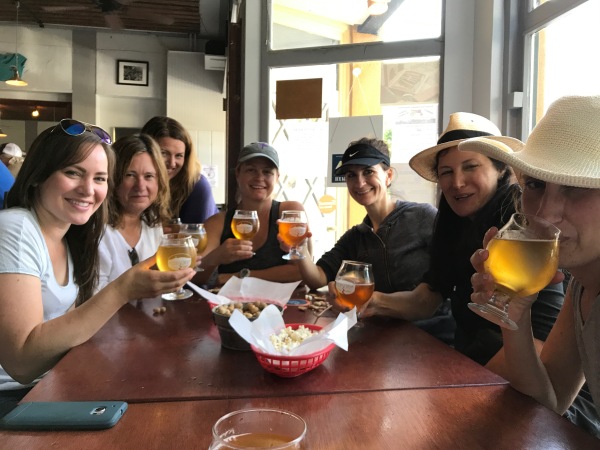 Ataraxians enjoying a beer after an invigorating Lake County hike. 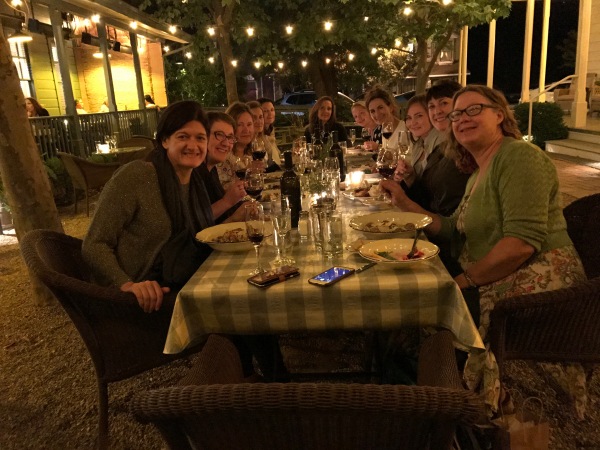 Ataraxians enjoying Hawk and Horse biodynamic wine with dinner outside the Tallman Hotel in Upper Lake.

These were three wine regions that were new to me and I loved getting to know them– and I enjoyed doing it in the companionship of other wine writers who I have come to know over the years via social media and wine events. 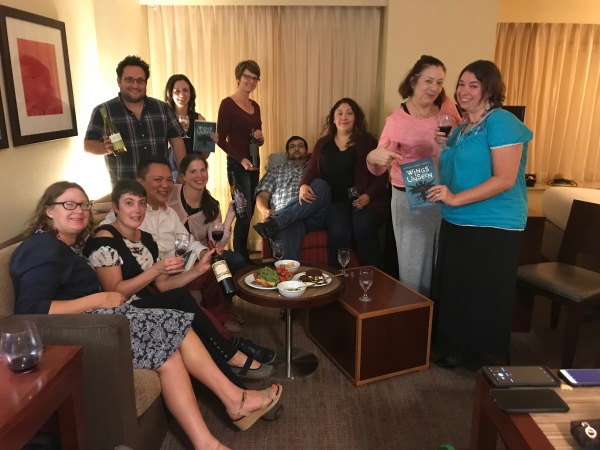 Sue and I also had many adventures in food and wine including lunch with Erica Crawford of Loveblock at LA’s Wolf and an excursion during World Of Pinot Noir to visit WALT wine’s new acquisition of Clos Pepe with lunch at the Santa Ynez kitchen plus many memorable meals with amazing wines at my house or hers.

Beyond the world of wine, important events in 2017 included participating and organizing a series of protests about the current administration. In addition to the Women’s March in Ventura, I organized several “human banners” where we spelled out RESIST and we created a “thermo-climb” to call attention to climate change. Read more here. 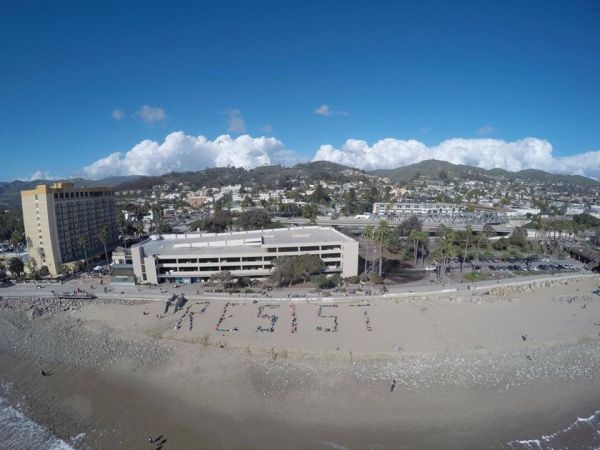 February 2017 I organized an event where we spelled RESIST on the sand with our bodies on the Ventura Beach. Note the green hillsides; they are now black from the #ThomasFire.

Here’s to a productive 2018! What are you looking forward to? What would you like us to focus on and write about?

For Italian Food, Wine, Travel on the first Saturday of the month, we plan to investigate the following:

For Wine Pairing Weekend on the second Saturday of the month, we will tentatively explore:

The French Winophiles plan to publish on the third Saturday on the following topics in 2018: 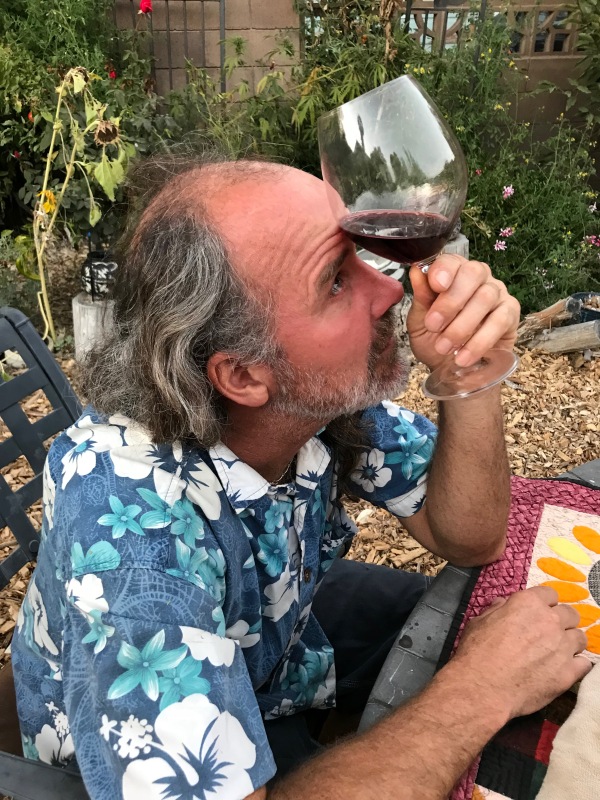 John “groks” a biodynamic merlot from Beaver Creek in October 2017

PS What else happened in the blogging world? Check out this post with the biggest news in 2017 for WordPress!