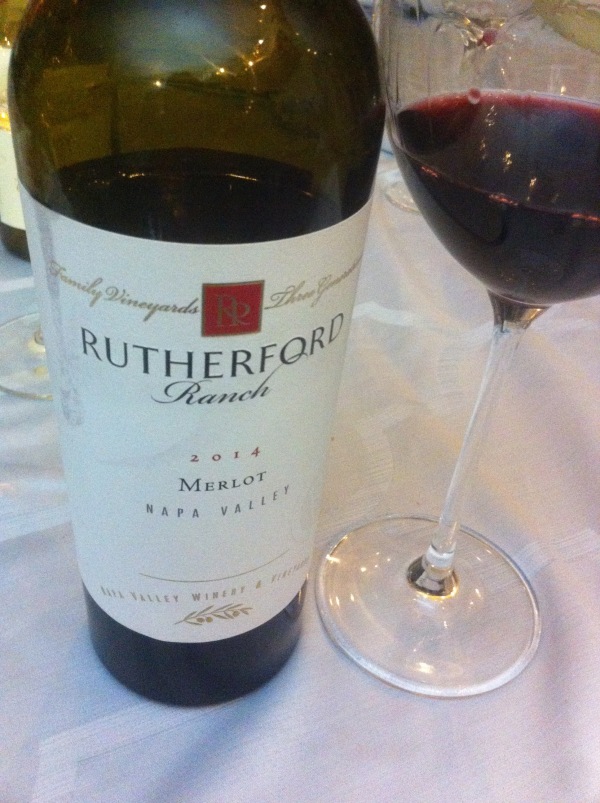 After the movie Sideways came out, sales of Merlot dropped.

Under the influence of Miles, people were turned off by the idea of Merlot; people would even be ashamed or embarrassed to admit to me that they like Merlot!

So we thought that for this National Wine Day on May 25, Merlot needs more consideration. And we happened to have handy a recently arrived sample of the 2014  Rutherford Ranch Merlot from Napa Valley!

Cabernet Sauvignon can be so heavy and intense: I don’t know about you, but I don’t want that all of the time. That’s why you need to revisit Merlot. Merlot wine tends to be smooth, easy going, and even in character.

Merlot is not going to overpower the room and leave you behind. It will be your comfortable best friend who will stand beside you and not outshine you: as it so often does with a Cab Sauvignon.

Merlot is your every day working person’s after work and before dinner wine because they are often surprisingly affordable for the quality and can pair well with tuna, salmon, roast chicken, duck, pork roast, and red meat. In fact, about 15 years ago when my dad asked me about what would be a good go to wine that he and his wife would enjoy other than Zinfandel, I suggested Merlot. And he proceeded to buy it by the case!

Color – Light garnet, with a pinkish hue around the rim that’s a bit redder, more coral than crimson.
Nose Herbal and fruit predominates with sage and mint typical of East Bank Bordeaux which is Merlot based. The herbal qualities range from minty sweet to savory bordering on bell pepper. Mineral qualities as well such as sulphur, graphite, carbon, pencil lead, and steel.
Palate – The tannins on a merlot are more velvety, and this one is typical in that way offering a smooth velvety mouthfeel.  On the palate, we get a lot vanilla from the oak treatment, that, while prevalent, does not overpower the grape. It reminded us of being on a dusty trail walking through wild rose, mint,  and lavender.  As each of these profiles are identified, the appreciation for the wine deepens. Mid palate is fruit, red stone fruit particularly cherry  and plum.

Merlot can be so approachable, and this is such a well balanced example: supple tannins, sweet fruit, herbal notes, steely finish.  When it comes to Merlot, too often people try to give it more umpf with oak. You can taste the oak treatment in the wine, but it is not too over the top. It is nice with the wine now, and will continue to integrate and mellow as this wine lays down over time. This pairs well with  caprese salad (wish I’d had a burrata!): a creamy velvety texture coming from the cheese, the umami of the tomato, and the herbal basil compliments the texture and flavors of this wine.

Winery Tech notes: Ripe Bing cherry, raspberry, nutmeg, cloves and notes of vanilla. Select lots were sourced from diverse Napa Valley sub-appellations to create a medley of nuanced flavors, aromas and varietal characteristics. Winery Production Notes: The winter of 2013-2014 was one of the driest in California’s history with Napa Valley receiving only half of its average rainfall. But, with respect to grape quality, there was good news: heavy rains in February and early March gave the vines emerging from dormancy a rejuvenating boost. Furthermore, the overall dry season resulted in smaller berry size with concent rated characteristics that added depth to the fruit’s inherent flavors. Winery Food Pairing Notes: Soft tannins and the grape’s inherent sweetness make this wine an ideal accompaniment to duck and other light meat entrees and particularly delicious with blackened fish dishes.

And if you’re looking for something out of the ordinary and out of this country, Merlot is common in Bordeaux blends and grown all over the world. Curious about Merlot from Canada? Check out these three from BC. Bonus: cute kitten pictures!

By the way, did you know there’s a new book out by Rex Pickett, the guy who wrote Sideways? It’s pretty funny too, but it has some serious notes as well…

National Drink Wine Day this year also happens to be Chardonnay Day! That post is coming up next!