“The river of my village doesn’t make you think about anything.
When you’re at its bank you’re only at its bank.”

“The Tejo has big boats
And there navigates in it still,
For those who see what’s not there in everything,
The memory of fleets.” 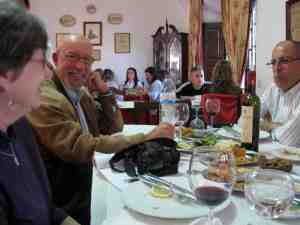 Last fall, I wrote an essay for a contest to travel to Portugal to taste wine in the Alentejo Region and to write about it. I came in as runner-up but when winner Sonadora of the blog Wannabe Wino canceled a few days before, trip sponsor Enoforum Wines invited me to go in her stead and accompany their publicist Jo Diaz of Wine Blog fame; Sonadora went in January 2010 and posted extensively while there. 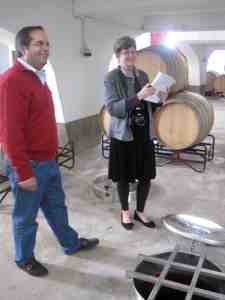 Traveling in Portugal–exploring the scenic castles, discovering the delicious, flavorful cuisine, tasting the nicely balanced wines–was delightful and I jotted down as many of those experiences as possible and posted them as quickly as possible on my blog: I just didn’t sleep since my days were filled from dawn to well after dark! (I kept telling Jo, “we can sleep when we’re dead!”) Read about our whirlwind travels here. 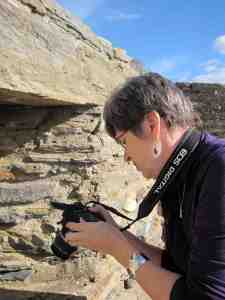 I thought it would be easy to write about Portugal when I came home. I had lots of ideas for blog posts. But writing more deeply about Portugal and my experiences there proved problematic.

Writing about how and why Portugal impacted me and changed me is hard because my brief time in Portugal had a profound impact on me–and that surprised me. There are a number of reasons but one is that I had no idea that the Portuguese had such a reverence for two of the most important aspects of life to me: the land and literature. A bonus is they love to walk and ride bikes! 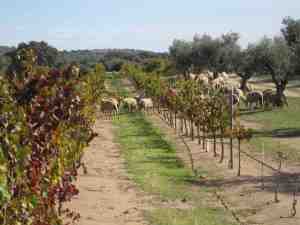 To write about Portugal is to try to express the importance of taking care of the land and expressing a love of life through the written word, through literature. Literature lives in the hearts of the Portuguese people–lit is not just a class they have to get through, literature and writers truly are revered by the Portuguese. Poets, playwrights, writers of all stripes are respected in a way I had never seen before–certainly not how we’re treated here in the US!

Likewise, living “green” and practicing sustainability is the way of life in Portugal. People who live and thrive in one place for so many generations learn this in order to survive there and not run out of natural resources. According to my host Delfim Costa of Enoforum Wines, unlike other European countries, Portugal’s priority was not colonizing. Instead they established a series of ports so they could keep exploring–and then return home again (and drink wine!)

Writing about Portugal in a way that honors it and really shows people why it is special is more difficult than I thought. 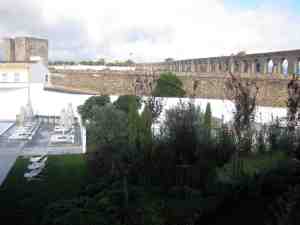 After our adventures in Alentejo, where we stayed in a castle with this view of the Roman Aquaduct, saw how closely people live to the land,  and enjoyed numerous meals of Portuguese cuisine paired with fabulous, affordable wines (most are under $20 US, around $10 in Portugal), Delfim drove us to Lisboa. We had a little time on our hands to explore and since our hotel was located on the waterfront near the Aquarium  that’s where we walked.

Inside the spacious aquarium, the best one I’ve ever seen or could imagine, instead of only interpretive text, the Portuguese chose to post on the walls marine-oriented poetry in English and in Portuguese.

Outside the Aquarium, we enjoyed walking along by the shore, the site of the 1990 Europian Exposition. Stalls which housed exhibits about various countries now were home to different restaurants featuring ethnic cuisines. The evening weather was mild and we saw plenty of people strolling and riding bicycles. 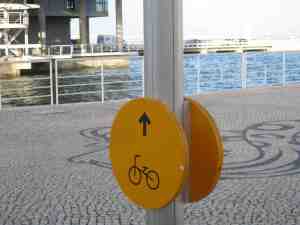 Our last very full day in Portugal was spent in Lisboa and the Palace at Sintra; our last dinner was in a restaurant featuring fado singers (Delfim interpreted the lyrics)  and incredible food. I would have enjoyed several days in each and I lapped up every moment: we even convinced the guard at Sintra to let us in after closing. I would have raced up the stone steps to the top if I wasn’t so concerned that Delfim and Jo would be worried. 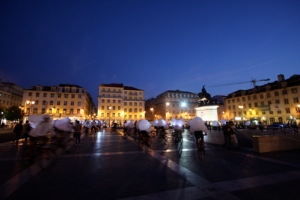 We walked along the shores of the Tejo which greets the Atlantic near Lisboa and we saw under construction broad bike and pedestrian paths displaying roadways. As a cyclist, I was thrilled to see that Lisboa was making this move; I also knew that Lisboa recently hosted an Aeolian Ride (more Lisbon Aeolian ride photos here by Jessica Findley; I also plan to do a post about the Aeolian Ride there and in Santa Barbara in October). What better way to know a place than by traveling the countryside tasting wine and eating traditional meals or by getting out of a car to walk or cycle?

While I never did get a chance to go for a bike ride, the importance tot he Portuguese of language, of poetry, and of staying connected to the land resonated within me.

On our last morning, we went  to the Jeronimos Monastery and saw the tomb of the famed Portuguese poet Luis de Camoes (1525-1580) who led quite an adventurous life, traveled to India and China by ship, and more which enriches his epic poem The Lusiads about Vasco de Gama on the voyage that ultimately connected Europe to India. He is such an important figure to the Portuguese that his birthday is Portugal Day and quotes from his work are commonly and prominently placed on decorative edifices in Portugal. Read one of Luis Camoes poems here.

Because Enoforum Wines recognizes that a wine is more than the grapes, that it includes the poetry of the people who make the wine and live on the land, Delfim bought me a copy of the epic poem The Lusiads as well as a collection by Fernando Pessoa.

“The river of my village doesn’t make you think about anything.
When you’re at its bank you’re only at its bank.”

“Through the Tejo you go to the World.
Beyond the Tejo is America
And the fortune you encounter there.
Nobody ever thinks about what’s beyond
The river of my village.”

“The Tejo has big boats
And there navigates in it still,
For those who see what’s not there in everything,
The memory of fleets.” 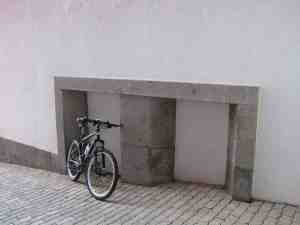 One thought on “Portugal: bike paths lined with poetry & wine so good it rarely leaves the country”

Wines of Chile have many fans because they are expressive snd affordable. We chose four different styles.
Gretel Meys Compton and I tasted Bordeaux 2020 today in WeHo with a view! I focused on interviewing and photographing women working sustainably in wine in Bordeaux . Mostly men pouring there and women doing marketing but here are a few winemakers and owners we met and their wines we tasted today.
Looking to enjoy French wine on a budget? France’s Rhône Valley offers excellent values in reds, whites, and rosés that also provide a diversity of grapes and complex flavor profiles. Crisp and refreshing whites and rosés work well with winter citrus salads, seafood, and chicken. Red blends pair with heartier and richer fair including stews, braised meats like lamb shank, and my favorite, cassoulet which we made in the instant pot for my birthday and cassulolet day with a blend of meats: duck, pork, and lamb along with cannelloni beans and root vegetables (instant pot recipe up soon on Wine Predator!)
Tiny Cantina de Frignano in Emilia-Romagna produces around 22k bottles, at most 2k cases a year. While quite small, they grow a wide variety of organic grapes, specializing in a few which grow nowhere else in the world, making this winery ideal for us to focus on as the Wine Pairing Weekend crew explores new to us grapes for the new year. Sheila Donohue suggested we try these two wines from Cantina de Frignano she imported Verovinogusto recently that have never been in the US before, one made with the rare grape of Uva Tosca and the other with 85% Lambrusco Grasparossa and 15% Malbo Gentile, another very special grape from Emilia.
Happy smiling ginger kitty on my tummy in the hazy morning light between rainstorms and writing and teaching prep…
Yesterday was Cassoulet Day which is perfect for these cold wintry days! Since it is one of my favorite dishes, Sue Hill created an instant pot version finished in the oven to celebrate my birthday tomorrow! We added a citrus salad and paired the meal with a white, rose, and 3 reds from the Rhône region of France. The cassoulet has duck, lamb, and pork plus cannelloni beans with lots of leftovers! Yum! Will be writing more about this next week and publishing the recipe January 20. Stay tuned!