What is it they say about good intentions? The road is paved with them?

Jeez, I must have a whole freeway system…

Last month I found out that Wine Blogging Weds #51 asked for Baked Goods: what to drink for dessert, specifically madeira…yummy! I enjoy a good glass of dessert wine many evenings, and was thrilled for an excuse to test drive madeira–except I couldn’t find any. I did have on hand a few Australians:  Jonesy Port, as always, as well as a 2002 Lillypilly Noble Blend sweet white wine and a 2002 Hazy Blur Baroota Late Picked Shiraz I was itching to try which I picked up from the Grateful Palate.

But Nov 12 came and went in a blur of birthday festivities for my boy and so did Wine Blogging Wednesday #51 leaving me waiting for  WBW # 52 : Chilean Value Reds.

Back in college in the 80s, I used to drink a lot of Chilean wines under $5. Gato Negro and Gato Blanco as I recall and a few others from the Maipo valley were the $2 Buck Chucks of the day. This was before everyone and their sister in the US were growing grapes and were making wine.

Finding an interesting Chilean under $20 and drinking it and writing it up by the next WBW, Weds Dec. 10, would be no problem I figured. Well here it is Tuesday Dec 9 and I am still empty handed when it comes to a Chilean Red Under $20.

I started at the best local wine retail outlet, The Ventura Wine Company, and glanced around. Last time I was there but nothing caught my eye (except the Whirling Dervish Sauv Blan once again) so I emailed David of the blog Vinomadic for some suggestions. He’s spent quite a bit of time in Argentina and wants to import some of their smaller, sustainable wines here.

He emailed back a few suggestions including links to Kingston Vineyards and Organic Vintners. Unfortunately, i’d have to drive 30 minutes to get to a store which carries the Kingston and it’s too late to order anything from Organic Vintners.

David and I did check a Ralph’s in Sherman Oaks which offered two wines and we split the cost of the one on sale for $22, forgetting that the WBW is for Chilean Wines UNDER $20. The merlot wasn’t particularly memorable (I don’t even remember what it was!)  so I left it behind with David to see how it might develop over time. Earlier David had opened a 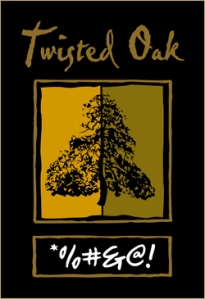 bottle of Twisted Oak and not much could follow that beautiful GSM which is a steal at $25 a bottle:.

2005 Calaveras County Asterisk Percent Pound Ampersand At Exclamation (Red Blend, Mourvedre Syrah Grenache) Arrrr, the name of this wine is so disgusting that the Scurvy Dogs who provide our web site can’t even print the title… More Details

Yesterday, I desperately searched the shelves of Vons (two more Chilean wines which failed to move me toward the checkout counter although I did pick up a 6 pack of Alaska’s Winter Ale complete with real spruce!! yummy!), I scavenged at my favorite wine store, Big Lots and came up with some interesting wines: a mysterious Tistyra 2000 merlot in a very impressive bottle (hope it tastes as good!), Artisan’s 2005 Napa Cab, and Parson’s Creek Old Vines 1999 zin ($3). Nothing like the steal of the Jamieson Canyon 2002 Napa Cab for $4 which I found for sale on the web for $25. Next I tried Smart and Final; I came home instead with a few bottles from clearance: Chateau Greysac 2001 Medoc for $14, a BV Chard for $14, and two bottles of Bonterra Chard for $8 each.

Lots of interesting wines for under $20 but still no Chilean Red. I am going to try the Ventura Wine Company once more. I might even be making a road trip…