“That’s kind of why you like Malbec,” says Clos des Amis winemaker Bruce Freeman. “It has some cajones! It’s not just a fruit bomb; it comes back at you. Caught ya, not got ya! It seems like it will be a sweet thing but then it’s sassy.”

With April as Malbec Month, and Malbec Day this Friday, April 17, NOW is the time to share Malbec! But it’s also a great wine to drink all year around — with grilled meats in the summer and braised meats in the winter, and with cheese and cured meats all year.

We’re big fans of Malbec here on Wine Predator. Also known as Cot in its French home just east of Bordeaux in Cahors, Southwest France, and according to one author, a godforsaken grape, we disagree — and so does Argentina where more Malbec is grown in this South American country than anywhere else in the world:

We appreciate Malbec so much that we’ve written about Malbec and paired it with food many times making it easy to offer a round up of recent Malbec posts with pairings.

Plus I’ve got three recent releases from the Hess Collections from  Argentina, one from Clos des Amis in Central California, and one made in North Carolina at the Biltmore with fruit from “America.”

First, a few blasts from the past to give you an idea about MALBEC and why we love it so much: 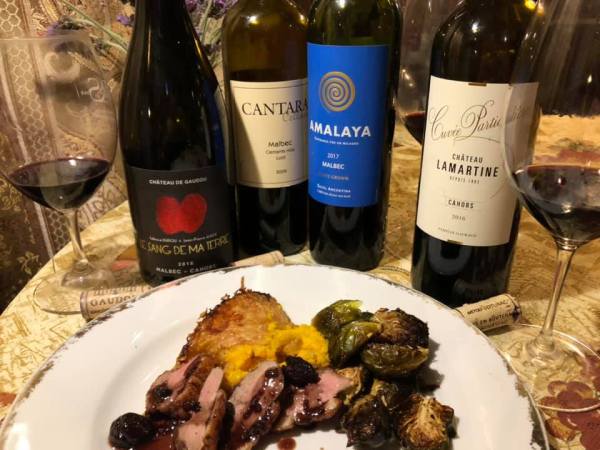 now what goes with what?

In this article, we compared and contrasted two Malbec from France with one from South America and one from North America. We decided to do Argentinean for appetizers and a French main course of duck with home canned cherries.  Yum! From France, one wine is in conversion to organic which is 100% malbec, the other has 10% tannat. From Argentina, it has a little tannat and even less petit verdot while the California one is 100% Malbec. The wines we discuss are:

An important part of the philosophy of the brothers Pascal and Jean-Marc Verhaeghe who own and run Château du Cèdre  is:

“Nothing is lost, nothing is created, everything is transformed”from On Nature by Anaxagore de Clazomenes

According to the brothers, “There is an unearthly dimension with vines, you always get more in return than you gave.” We brought this wine with us from the US to France and we paired it with charcuterie and a melted cheese with potato dipped in it! Read all about it here.

Last year in 2019 for Malbec Month, we focused on Argentina and we tasted these wines with Argentine food: 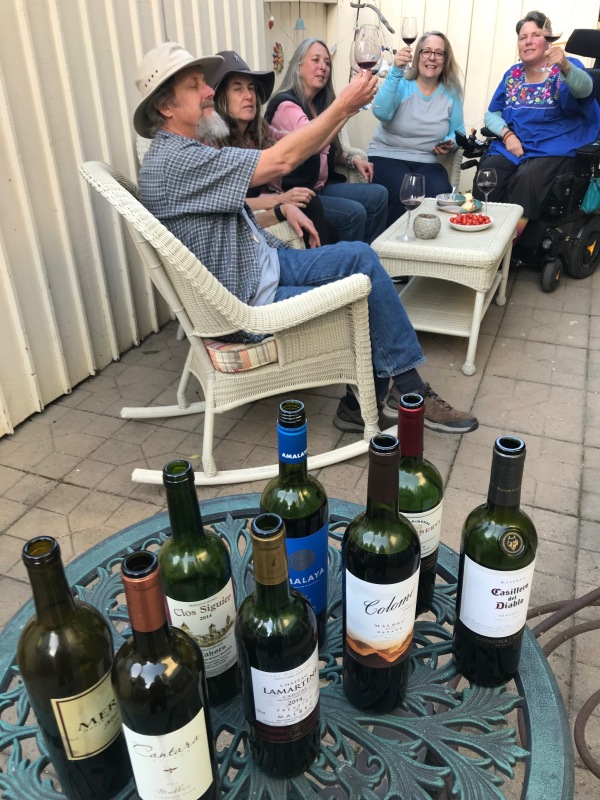 For a previous Malbec month, we gathered a group of friends for a Malbec themed potluck and sampled eight Malbec from four countries and three continents: 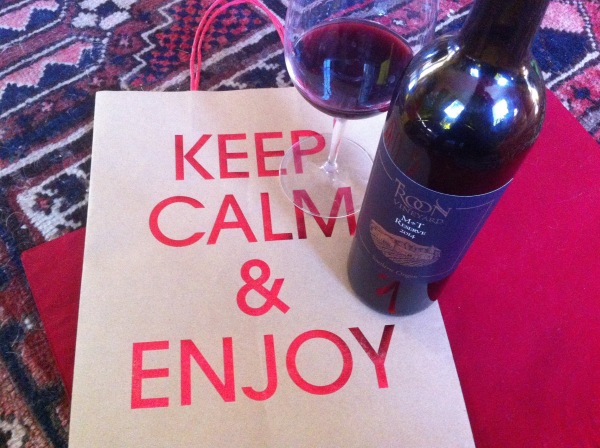 We tasted and compared five Malbec from five regions of the world and on three continents: France, Argentina, Oregon, Washington, California from the US. All five were distinct and different but paired well with pancetta wrapped pork loin! 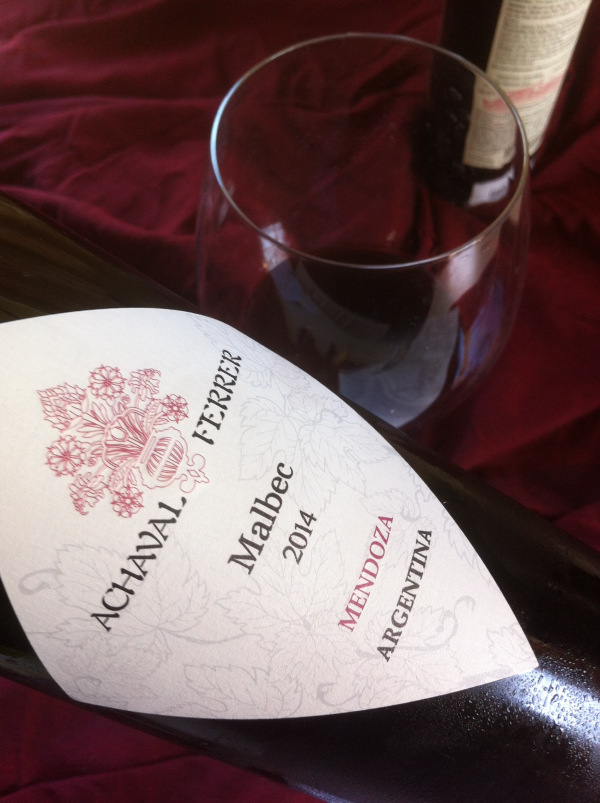 Each Tuesday in September for #WineStudio we paired wines from Argentina. Check out this round up article for tips and pairings.

But wait there’s more! Clearly we are fans of Malbec! So what’s in our glasses right now?

In anticipation of Malbec Day 2020, I sampled five Malbec with Bruce Freeman and Gretel Compton during breaks between cellar and vineyard work on two occasions– while maintaining social distancing of course!

First we have three wines from the Hess collection. During a Facebook live event today, the winemaker said that Malbec is his favorite varietal to work with. 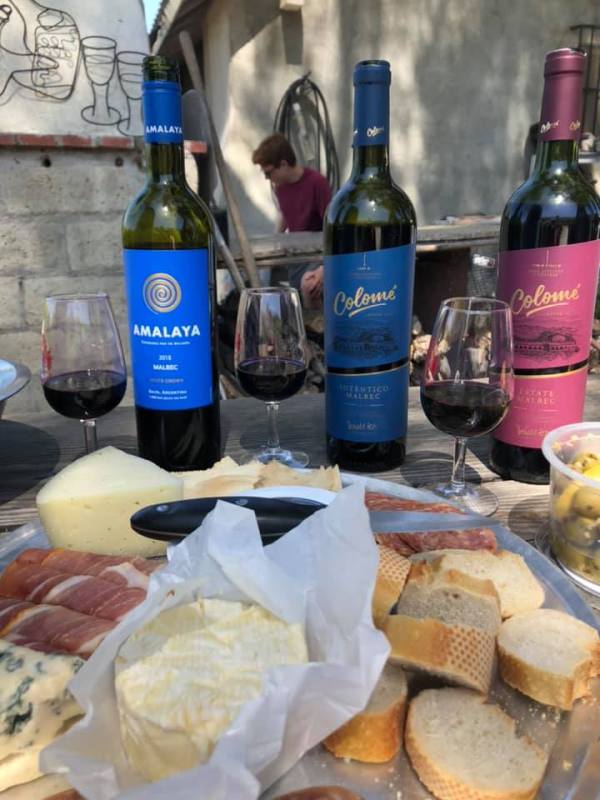 “Esperanza por un milagro” translates to “hope for a miracle” which Bruce says is what you always hope for in every bottle of wine you make.

The vineyards are located a mile above the desert, and these conditions stress the vines so that they produce intense flavors.

A deeply hued garnet, with plentiful blue fruit on the nose and lots of blue fruit on the palate, with some red fruit as well. It has that Malbec grip  “a little slap you on the side of the face, wake up dude” says Bruce. Pair with bold foods form strong cheeses and cured meats to steak off the grill.

A nice, solidly made wine for $18 that fits that sweet spot for under $20. 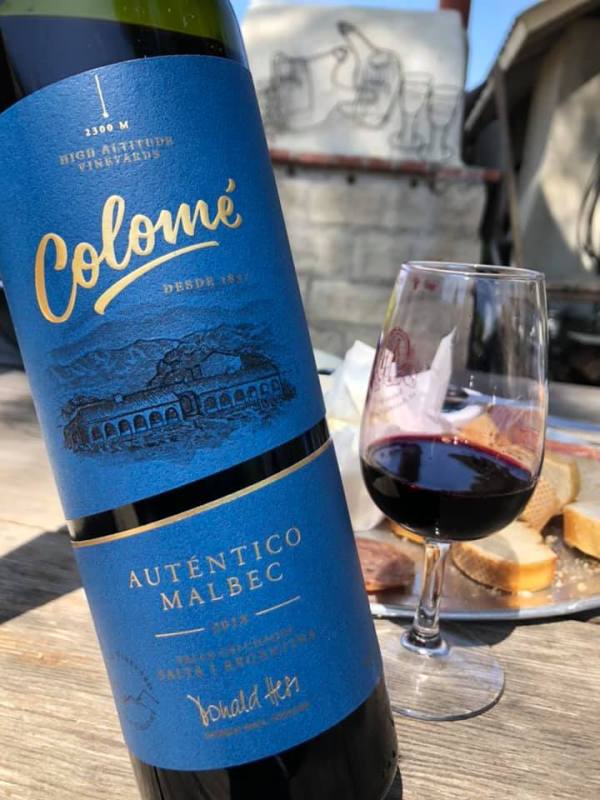 Farmed sustainably at 2300 meters (about 7500′), vineyards are cooler because of the altitude and grapes have thick skins which provide depth of flavor and acidity. The “Authentic” pays tribute to the pioneers who began growing grapes and making wines here in the 1850s.

Appealing color and blue fruit on the nose like a blueberry pie, and this wine was very appealing at first on the palate, but then we found it a bit troubling, it seemed a bit too manipulated with the oak not quite well integrated yet. With food including cheeses and meats, these concerns are dispelled, and perhaps this wine just needs a little more time in the bottle.

This is a blend of the best blocks from their vineyards that are the highest in the world including one 3100 meters — that’s over 10,000’! These are some vineyards I want to see and spend time in! The higher the altitude the thicker the skin and so that provides a lot of oomph to the wine– intense flavor and plenty of balancing acidity.

The color is deep and the nose offers rich raspberry, raspberry preserves, and a surprising amount of floral notes– spicy carnation and dried rose petals. On the palate, the wine is full bodied, smooth, with notes of  earthy cantaloupe and plum jam with pleasant nice finish and integrated oak. Overall a smooth, mellow, well made wine that is both distinctly Malbec as well as new world and Argentina.

Blue cheese: fantastic; meats – fennel sausage, soppresseto, jamon – all excellent. This is an example of “you get what you pair for.” Wines from Argentina are an excellent value and this wine offers quite the bang for the buck; it’s definitely worth paying an extra $5!

I’m going to admit that I am very partial to this wine and to the style of wine that Bruce Freeman makes. It’s direct, it expresses the fruit, and the land where it comes from. 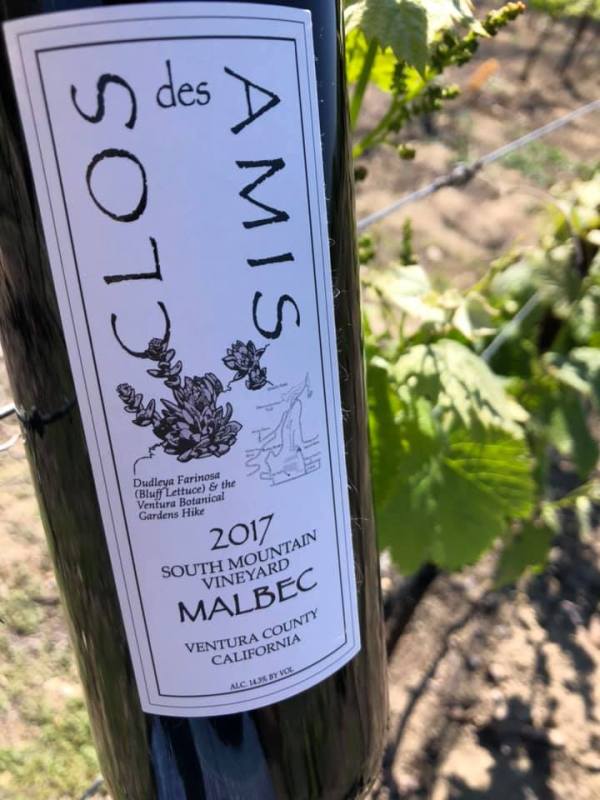 Clos des Amis Malbec in the estate vineyard on South Mountain above the Santa Clara River between the small farming communities of Santa Paula and Fillmore in Ventura County.

It’s clean, fresh, and dynamic with a lot of zip, and it pairs really well with a range of foods as we found on both occasions. Surprisingly, it was my favorite with the empanadas! Also really good with Manchego.

Every bottle of Clos des Amis wine features a local hike with drawings by Bruce’s partner in the winery and life, Gretel Compton; the Malbec has Duddleya Farinosa and the Ventura Botanical Trail. While I was able to get to the vineyard for this photos (and to do some pruning!), I really miss hiking a the Ventura Botanical Gardens where we are members and I usually hike above Ventura once or twice a week on Tuesdays and Wednesdays when we can bring our dog.

The gaudy, ornate Biltmore near Ashville North Carolina is famous for festive holiday decorations, and a sumptuous menu in the dining hall. According to Bruce, who has visited, it has a state of the art winery with a California winemaker who has the luxury of choosing and importing Malbec from locations across the country. A well made wine with a wealth of oak, the nose is very sweet and appealing with spiced blueberry pie with vanilla ice cream, and carnation flowers. We suspect there’s a fair amount of residual sugar which would please the clientele; the wine is soft and smooth and lacks the characteristic Malbec grip but makes up for it in blue fruit.

OF the five wines we tasted, this one is the fruitiest, sweetest and smoothest making it a great pairing for a rich steak like a filet mignon with or without bacon or blue cheese.