If you’re a regular reader of Wine Predator, you know that as often as possible I partake in an online educational program called #WineStudio where each month we have a different focus. Often participants receive wine samples which we taste and discuss together along with the winemaker and others involved with the wine. You can often find the wines and join in on Twitter from 6-7pm PST.

However, September’s #WineStudio time was changed at the last minute to 5-6pm PST making it tough for us on the West coast to participate if we have work, but much easier for those on the east coast and for our South American featured winery, Argentina’s Achaval-Ferrer. Read more about September’s #WineStudio at the Protocol Wine website.

Right away I learned that Argentina is one of the top five producing wine countries in the world. While I found that surprising, I shouldn’t have: it’s a really big country and wine has been made there since the 1500s. But only in the past twenty-five years has winemaking in the region expanded enough for people in the US to discover the high quality wine that is being made there. One such example is Achaval-Ferrer, which has been around since 1995 and for over 20 years, Achaval-Ferrer has led efforts to develop high-end winemaking to make Argentina one of the top wine-producing countries.

Being the foodies that we are, Sue and I wondered about regional foods as we discussed what we should pair with these two wines. When I recognized my friend Patricia Clough’s name on press materials that came with the wine, I reached out to her –and she reached out to the wine maker Gustavo Rearte @TavoRearte who on twitter suggested, in addition to red meat, we should try pasta with red sauce, Ratatouille, tacos, cheese, or Empanadas. Our research also pointed us toward roasted vegetables and a super cheesy baked polenta with sun-dried tomatoes we knew had to make it! We found the recipe here along with some other recommendations of what to pair with Malbec. What also sounded really good was this braised rack of lamb with creamy polenta… so off I went to the store!

But then when I found flank steak and organic strawberries on sale, and Sue had plentiful beets from her garden I knew what direction we were going: charcuterie with grilled sausages,  Grilled Steaks with Strawberry-Malbec Pan Sauce, roasted beet salad, plus roasted carrots and brussel sprouts. 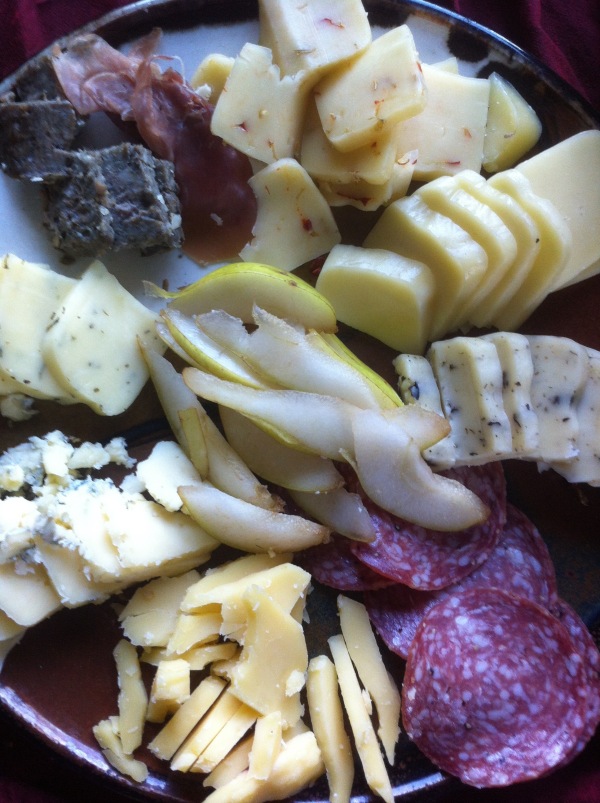 Our cheese plate included a country pate, brie, pear, salami, prosciutto, a cheddar, a truffle cheese, and a jack with a kick to it, and both wines paired well with these rich and meaty bites. 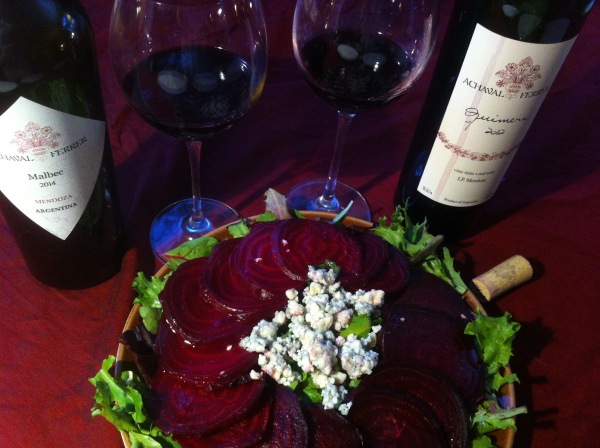 But it was really the grilled Spanish chorizo that made these wines sing– so much so that we chopped some up fine to add to the roasted beet and blue cheese salad dressed simply with balsamic vinegar and good olive oil. So much yum! 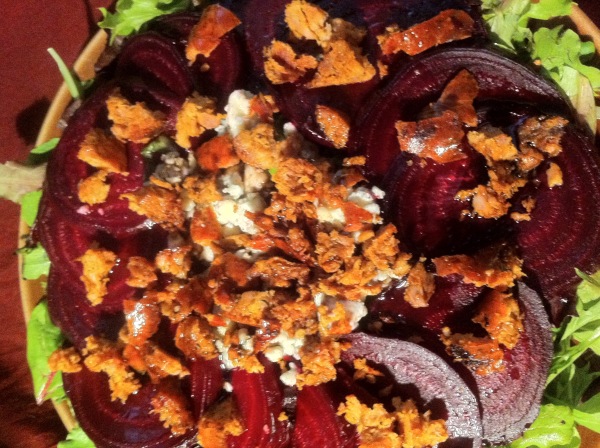 The main event, however, was the steak with the strawberries. Sue made the sauce with shallots, strawberries, balsamic and wine and Marsh picked rosemary sprigs from our garden which he stripped and then used as skewers for the strawberries. 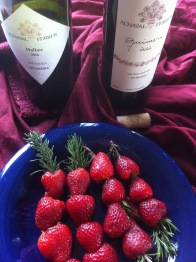 Right off the bat, I fell hard for this Malbec! So much decadence for only $25!

The color is a dense, deep purple; you cannot see through this deep burgundy colored wine.

The nose smells amazing: mouthwatering, herbs, musky, meaty, savory. There is fruit on the nose but what really catches your attention is the earthy quality different  for me than any other malbec I’d had before. Malbec often can be fruity, and that fruit can dominate. This Malbec has more depth: depth of color, flavor, character, yet this wine can be enjoyed as a cocktail wine. It does not need to have food to be really enjoyable.

On the palette, this went really well with the sausage. Argentine foods have a good kick to them, and the sweetness in the Malbec pair well and is able to tame the heat. The herbal qualities of the chorizo go so nicely with the herbal earthy qualities of the wine.

This wine really opens up nicely and we both found this to be an amazing wine that tastes much more expensive than it is. In color, it’s super dense with hues of ruby and purple, maybe even magenta. The nose is herbal with some bell pepper and earth. This is not as fruit forward as the 100% malbec; it is beautifully blended and balanced. On the palette, this wine has a savoriness –it’s got meat to it, and great character.

No surprises–it paired well with the rich polenta, the juicy savory, spicy and sweet steak, and with the beet salad and other roasted vegetables. Sue in particular swooned with how well it went with the carrots.

Both wines are memorable: they are robust without being dominating, they are balanced, and they have a lot of presence and character for the price. The bottles and labels are beautiful and distinguished.

Join the crew for tonight’s #WineStudio #ManyMoodsofMalbec and learn about the Finca line, the penultimate of the Achaval-Ferrer portfolio that showcases this single-origin vineyard, as a few lucky folk taste the Achaval-Ferrer Finca Bella Vista 2012 100% Malbec  (SRP: $140.00) from  Luján de Cuyo, Argentina. Key Twitter handles to follow include @AchavalFerrerUS, @SantiagoAchaval, @ProtocolWine, and @TavoRearte.

I’m not sure whether I’ll be at the event but I will be tasting more “Great Wines of the Andes” that day when I taste wines from Viña Valdivieso which dates back to 1879 when Alberto Valdivieso founded Champagne Valdivieso, the first company in Chile and South America to make sparkling wine. In the late 1980s, the company expanded into making still wines with a superior quality. I’ll know more about the wines after I taste them with winemaker Brett Jackson during a lunch in Beverly Hills:

I also had lunch recently with the winemaker of another Chilean winery, Odjfel, where we tasted a vertical of ancient vine Carginone. But I will save those notes for another day!

And what’s up for October? In addition to a Saturday October 1 post about an Italian harvest dinner, and a #MerlotMe month meal Oct 8, plus Halloween madness with Flora Springs before we even get to October, #WineStudio on Tuesdays will be traveling from Argentina to Australia for Two Hands wines.

2 thoughts on “#ManyMoodsofMalbec for September’s #WineStudio with Achaval-Ferrer”