The picnic basket, James! James Donzella, that is! He takes people in his historic vehicle on a tour with lunch and tasting at Clos des Amis. Details below.

Many of Ventura County’s vineyards back right up to wild lands — and by wild lands, I mean the Los Padres National Forest which provides excellent habitat for wild animals including bears.

So maybe not tigers, and while we DO have mountain lions in our woods, they are not as interested in the grapes as the BEARS are and the deer and raccoons too!

Let’s keep the mountain lions on the labels and not in the vineyards! especially during our lunch break with sandwiches from Fillmore’s Roan Mills Bakery.

Bears are a BIG reason why Clos des Amis winemaker Bruce Freeman doesn’t want partner Gretel Mays Compton to go prune the vines above Fillmore by herself, even with the dogs, and even with me there also!

It’s not just a suspicion that bears visit the vineyards and eat the ripe grapes. Bruce has seen piles of poop and steaming pee– which means that bear was a little too close for comfort!

It’s enough to tempt him to call the wine from these cabernet sauvignon grapes  “Caca de Oso”! Oso, of course, means bear in Spanish… and caca means, well, caca… 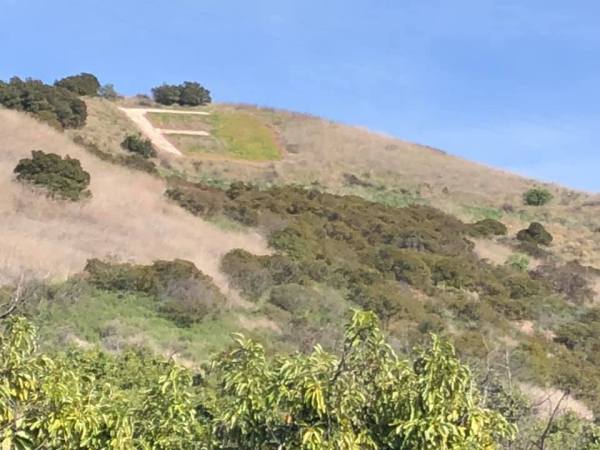 Fi si for Fillmore; the large F is just above the avocado orchard the encircles the Fillmore vineyards.

With the unseasonably warm, dry weather this January and February, not to mention the bears, a circle of friends met up twice earlier in the month of February to prune the young vines above Fillmore amidst the avocados just below the large “F” you see as your drive east on California Highway 126 along the Santa Clara river. I entered using a secret code by the train crossing– as you can see, my sidekick was quite excited! 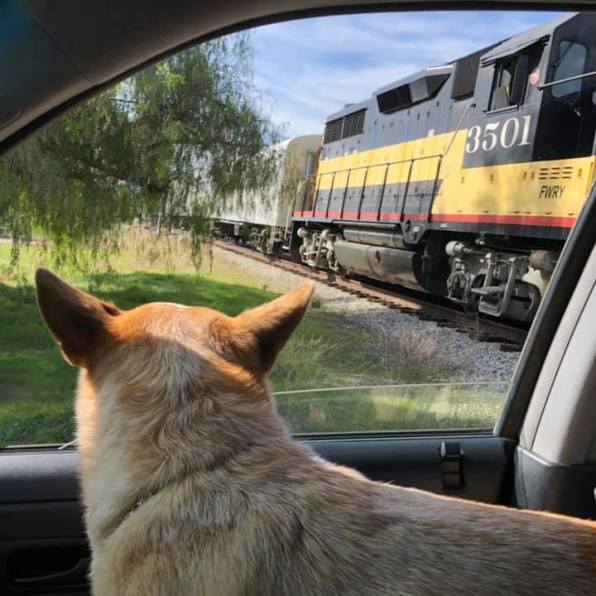 While last month I learned about pruning out “deadwood,” this month I learned more about new wood. This is my second season to prune some of these vines, and they are really coming along — getting taller and stronger– even if there wasn’t any fruit to pick last year because the animals ate it all… which is really not that surprising considering it’s only two years post the Thomas Fire which scorched the back country around here in one of the largest fires in California’s history.

Unlike other vines we prune, or the vines you are likely used to seeing that have trellises, these young vines in Fillmore with be head trained. Without any wires to hold them up, the vines themselves must do the work, and so we must select the four viable vines going off in four different directions.

After pruning, we enjoyed lunch — a selection of sandwiches from Roan Mills in Fillmore paired with wines from Clos des Amis. We spent a lot of time during lunch considering the dosage of the brut and the rose Chambang, and decided the rose needed just a little more so a few days later, we gathered at the winery to bottle up a few cases of both sparkling wines just in time for Valentine’s Day (read more about the rose Chambang and other wines we paired with Valentine’s Day here).

But something has to be done about the bears and other wild things if there is to be a crop in 2020!

Earlier this week, I joined Bruce and Gretel at the winery to taste the various lots of Ventura County rose to determine the blend. This entailed syphoning the wines out of the barrels and tanks, identifying them on the table, then Bruce did the math and I did the measuring. Even with a recipe to follow, it’s harder than it looks! Because of the challenging 2019 vintage, some of the wines were better than others, but blended correctly, they can come together harmoniously — as we found as we experimented with various proportions. Because I was so busy doing this, I neglected to take any photos of the process– or the mess I made!

I did however, take some time out to to check out the Model A and picnic! James told me it seemed too bad that this wonderful vehicle was just sitting in the garage so he decided to share it with others and take it on the road! The Picnic at the Vineyard includes a historic tour of downtown Santa Paula followed by a trip to the Clos des Amis winery for a picnic. Cost is $135 for two. Maybe I’ll see you if you visit!

This post is part of a series about what I’m learning in Ventura County Vineyards. I started the series in January 2019. To read more of this series:

March is Women’s History month, and I’m super excited about three of our upcoming features: up first, Napa’s Pahlmeyer with a woman president and winemaker, dinner with Ojai’s Chef Robin  Goldstein featuring recipes from her cookbooks and wines from Topa Mountain on March 14, and a feature on March 7 on Italy’s Vigna Petrussa made by a woman and imported by a woman, Sheila Donahue!

Also in March, we’re headed to World of Pinot Noir March 5 for a day with WALT wines where Kathyrn Hall is a key figure as is director of winemaking Megan Gunderson, plus I’ll be writing about the Clink Different dinner I attended at NoMad with wines from Bordeaux and Germany. We’ll be featuring sparkling wine from Bordeaux on March 21, and I have some red Bordeaux and wines from Germany we’re looking to feature this month. I’m also excited about writing about Folded Hills which has a triumvirate of powerful women including winemaker Angela Osborne.

Finally, I’m hoping to attend the week long “Bud Break” WSET 3 course from Napa Valley Wine Academy in mid-March. If you see something there you want to take, today only they are offering a Leap Year special $30 off any course! Use the code LEAP29.

Happy Open That Bottle Night! What will you be opening?

2 thoughts on “Lions and Tigers and Bears Oh My: New Wood and Old Cars in Ventura County Vineyards February 2020”