Gretel and Angie are in there somewhere picking… overgrown Viognier and Syrah vineyard in upper Ojai, California.

On Friday, Oct. 25, the final bin of grapes came in to Clos des Amis where I have been interning since January with monthly posts about the experience (here’s September; scroll down for the complete list).

For Ventura County vineyards and wineries, harvest began in August with most of the grapes in by the end of October. Most of September was warm and mild with cold nights, ideal conditions, but October got HOT.  As Jonas Haas reported about Tablas Creek, 2019’s harvest was an unusually short one:

In my newest @TablasCreek blog, I dive into the recently-concluded 2019 harvest. It was a weird one, shortest in 18 years, with early grapes 2 weeks late & late grapes 3 weeks early. Yields were lower than expected, but still OK. Flavors are great, so…🤷 https://t.co/ghw8A0PkWu

As October and harvest drew to a close, during a record breaking heat wave with a red flag alert, Angie, Gretel and I met up at the winery, loaded a bin and buckets in the back of the truck, and as sycamore leaves scattered in our path, we drove up and over 150 from Santa Paula to upper Ojai.

We were headed to a small overgrown vineyard that Gretel and Bruce last picked five years ago when Bruce was working with organic Casa Barranca.

Why was it so overgrown? Upper Ojai was hit hard by the Thomas fire in December 2017, and there was so much for everyone to do that the vines didn’t get pruned and the vineyard may not have been harvested. In 2018, the vines didn’t get pruned either, and possibly not picked as much of the crop in Ventura County was fried in a surprising hot summer heat wave. Come 2019, the owner didn’t bother to pay to have the vines pruned or tend the vineyards beyond overwatering them — a largely unnecessary move considering the amount of rain we received this year.

What happens to an untended, overwatered vineyard?

We were warned that the vineyard was overgrown, but we weren’t really prepared for the nasty russian star thistles that punctured my shoes and molested our dogs. I had thought about throwing boots in the car but my lightweight fast drying trail runners are so much better for working in the winery processing the grapes.

Untended, the vines go wild– it can be like walking through a tunnel or worse. The vines reach across the rows and become entangled in each other. We had to use our pruners just to get to the grapes and to find the fruit. Pruning, as I wrote about here, helps the vines to be more focused in what they do– make exceptional grapes to produce exceptional wine.

In addition to an abundance of vines, this small vineyard produced an abundance of fruit — but that’s not necessarily a good thing unless you want to pick and sell the crop as table grapes.

Abundant fruit means that the fruit lacks intensity, concentration, flavor. That’s why many wineries brag about low cropping and only picking a few tonnes per acre.

As circumstances would have it, Bruce was asked last minute if he was interested in picking it and using it. By the time we got there, much of the fruit was fried, and the rest was starting to raison. Fortunately, Bruce didn’t need much of the fruit for the blend he had in mind to use in so we could focus on just picking what was best — which fortunately was also the fruit in the shade of huge oak trees!

By 1pm we were hot and picked out; we had about a half bin that would do the trick. We stopped at Summit Drive-in and ordered lunch for us and the three at the working at the winery: Bruce, Greg, and Lily. If you go there, I can strongly recommend the orange milkshake– it really slaked my thirst and my hunger while we waited for the food! Definitely order the burger using locally grazed Watkins beef — back at the winery, it paired wonderfully with the South Mountain Merlot which Gretel made with fruit from Paso Robles. She did a great job integrating the fruit and alcohol to produce a friendly juicy wine that at cellar temperature was refreshing and hit the spot even on a hot day!

Our next task was to load the press with the viognier then set up the crank– we were going to be doing this by hand! 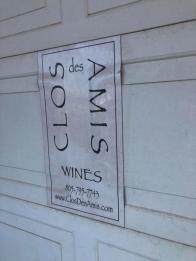 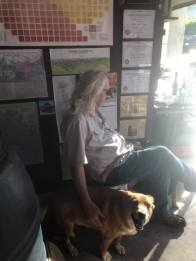 Once Bruce showed us how it was done, we all got a good work out on the crank, doing our best to push and pull until we heard that satisfying click. Once we pressed some of the juice off, we opened it up and topped the press off with the rest of the bin, then cranked it down again– this time with Lilly and I working together while her dad called off the clicks and he, Gretel and Angie held the press in place.

Bruce figured he had enough even though there was still plenty of juice that could be pressed — but what that takes is time and the effort of fluffing the cake. So we hosed everything clean and headed off into the sunset. Harvest 2019 was over; time for the grapes to turn into wine!