Ten years ago yesterday, on October 7, 2007, Cantara Cellars opened their doors to their Camarillo tasting room and winery.

Ten years later, yesterday, they celebrated this accomplishment with a dinner party with 75 of their friends, family, and wine club members sitting at one long table decorated with fall colors and pumpkins with succulents which were sold for $10 to raise for Meadowlarks. Tasting room manager and my writing partner Sue Hill and her sweetie John Walsh were there of course — and so was I.

Guests sat at one long table.

Highlights of the event included a slide show of photos from the previous 10 years plus stories told by Chris and Mike Brown as well as a quick story from Sue with a reminder never to run out of Franknvine.

As one of the first wineries in the area, and one that provided a custom crush facility, many local wineries learned how to make their first wines at Cantara. The winery still serves as a supportive incubator for the Ventura county winery industry and when the bottling truck comes, it has many projects going down the line — not just Cantara’s.

Catered by Camarillo restaurant Twenty88, the menu was developed by Chris and Chef from favorites that would pair well with Cantara wines. The Cambozola cheese was the perfect foil for the selection of red library wines that started the evening — a 2007 Barbera plus older vintages of 2010 Intrepid and the 2007 Left Bank Cuvee were standouts. Not sure how it happened but I missed out on tasting the 09 old vine Mohr-Fry Zin which is always a favorite of mine no matter the vintage. (PS Any Lodi wine naysayers? These wines are holding up fine thank you very much!)

As you can see from the photos below, the food was beautifully plated on site — quite a production! My favorite course was the final one — a light, not too sugary dessert plate of a polenta rosemary cake that had just a hint of sweetness along with herbal notes on a grainy textured base for berries and cream beside a succulent pot de creme paired with Project X, a fortified dessert wine that blends Petite Sirah and Zinfandel. Yum! 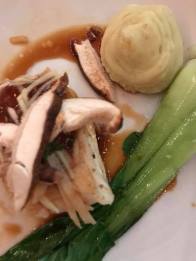 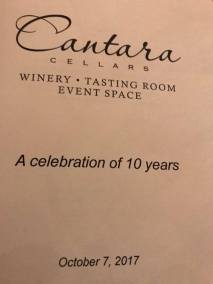 A brewery in the future?

The winery had room to host us all in the heart of harvest season because this year the winery is going to focus on its newest endeavor — Flat Fish Brewing Co. (yep, they’re brewing for the halibut…)

I know I know — a brewery? Aren’t they busy enough with wine? Sue and I think they ought to do sparking wine or at least rose (they have trademarked the name “The Bride” to go with their wildly popular trademarked Franknvine blend that starts from Cab Franc and goes from there), but no.

Mike actually started by making home-brew beer and wine in the garage in 2002-2003, then interned at Camarillo Custom Crush from 2003-2007. In 2005 they created Cantara Cellars and harvested their first commercial grapes — four tons of Zinfandel, Syrah, Petite Sirah, Grenache, and Tempranillo. In 2007 they opened the tasting room to the public.

So Mike and son Jesse are bound and determined to pursue their love affair with beer to its logical conclusion — a brewery next door to the winery. This way when part of a group wants wine and the other beer, they can be at the same location. And, as you may have heard, the most important ingredient when it comes to making wine is beer– that’s to slake the thirst of the winery workers!

Cheers to Cantara Cellars on their many accomplishments!

Stay tuned for a blog post about Cantara’s Zinfandel over the years just in time for Zinfandel Day Weds. Nov. 15.

Note: While I often get complimentary tickets to events such as this, I paid for this ticket.