Between the red & white #riojabuzz they go with everything on the table! pic.twitter.com/AUPRWFvhAj

When you think of wine from Rioja, Spain, you think red, right? and then maybe tempranillo?

But there is more to Rioja than red wine or tempranillo (even if tempranillo is over 75% of the region’s planted grapes!) 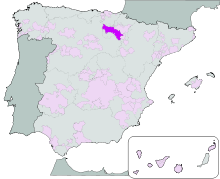 In fact, this wine growing region in northern Spain boasts white wines–and some tasty affordable white wines at that!

A few weeks ago,  Que Syrah Sue and I participated in #riojabuzz where we tasted a $15 white wine from Rioja,  the 2013 Cune Monopole and a $25 bottle of red wine from Rioja, a 2004 Tempranillo Gran Reserva. Both were delightful and a good value. Still in the Rioja mood, a few days later, I opened the 2010 Cune Rioja Crianza. 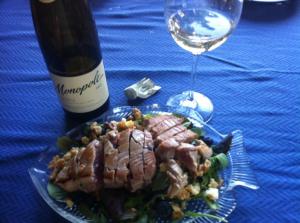 Pleasantly fruity on the nose with white grape, green apple, and honeysuckle, the 2013 Cune Monopole made from Viura grapes was also easy on the front of the palate, and you can taste the fruitiness of the wine– the sour green apple notes in particular are crisp and refreshing with a slight bitterness on the back of the palate, and the minerality comes through on the back of the throat.

Even though this wine has been made since 1915, and Monopole is the oldest white wine brand in Spain, we honestly didn’t know what to expect from this wine, however, we suspected it might be similar to a Sauvignon blanc and that proved true. As Sauvignon blanc goes with so many foods, I’d imagine this wine would work well with anything from salads to seafood to chicken as well as particularly well with anything with a goat cheese. We paired it with seared ahi tuna over a bed of greens topped with apricot Stilton cheese, blueberries, and a champagne vinaigrette and it was fabulous. I’m curious about trying it with a kale Quiche  or a spinach and strawberry salad with a sheep’s milk feta. On the second day, I paired it with a beet, chevre and arugula salad and was in heaven. This wine is a really wonderful value and I look forward to recommending it and sharing it with friends.

With one couple over to work on our Burning Man theme camp application, another couple came by to pick up a few pounds of a whole fresh tuna we’d bought.

Just add wine and we had a party! But which wine? I wanted something that would pair well with appetizers and since my friends were red wine drinkers, I decided to open this wine. It’s got a gorgeous ruby color with a violet ring and it’s a playful, flirtatious wine too. It’s a bit on the thin, light side with plenty of fruit, but surprisingly it opened up nicely over the next couple of days to reveal more vanilla and spice from the American oak barrels while retaining some red fruity freshness. Not a bad value for $14, try it with a salad with blue cheese or ham, mini-pizzas, or grilled burgers with blue cheese and arugula.

Wine in Rioja has four classifications which denote the aging and the use of oak. The youngest is a just a Rioja. This wine is a Crianza, distinguished by having been aged for a few years in oak barrels. The next category is Reserva which is aged longer while the next wine we tasted is a Gran Reserva which are made only in the best years. Aged for a minimum of five years with two years in oak and three years in bottle, many Bodega choose to age them for much longer making these elegant wines ready to drink upon release. Because so much wine is store for so long in oak barrels, a typical Bodega or winery has between 10,000 and  40,000 oak barrels! 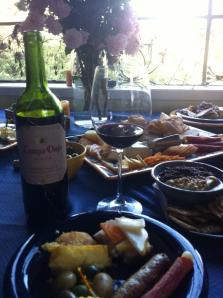 We swooned over the  Campo Viejo – Rioja – Tempranillo Gran Reserva 2004, with its  rich red rose color like a dark cherry in the glass, some barnyard to the nose, a bit funky and musky like leather and hay. Befitting a 2004, it’s smooth and easy to drink, not flat in any way, with lots of fruit, spicy plum, black cherry, and other dark stone fruits.

At $25, most people would expect a wine to be special and this one really is: it’s a fabulous wine. We really loved it and felt it would be worth every penny because it has a depth of character and a nice richness.  It might be a nice father’s day wine with a rack of lamb or leg of lamb. If you want a special occasion wine, this is a great wine to take to a nice event, like a party with heavy appetizers. As a wine to be appreciated  don’t take it somewhere where it will get lost in the shuffle!

We returned to it time and again to savor it and see how it had evolved in the glass and over the course of a lingering evening with good friends and conversation.

We found it paired well with olive tapenade, hummus, and El Cantu Mitica cheese and think it would pair well with lamb, roast chicken because it is very versatile. Not necessarily a cocktail wine or a wine for white wine drinkers, nonetheless, with tapas it works well and would do well with smokey flavors like cheeses and meats or grilled gourmet pizzas; upscale food works well because the fruitiness of the wine would lend itself well to many upscale meals but not too fruity to carry through to desert; in fact it does not complement dark chocolates as well as some more tannic wines can.

Wine maker Elena Adell grew up in La Rioja and her grandfather was a farmer. She studied Agricultural Engineering at university, then specialized in viticulture and oenology: “It was almost obligatory that I would end up, or really start off my career among vines and wines,” she says. “I like to make wines that are a talking point, that let us enjoy good food, wines which always make you want to have another glass. ”

And that’s exactly what happened to us that night!

Tasting these wines from Rioja definitely got us thinking about finding and drinking both more Spanish wines and more tempranillo! Coming soon–a post about tempranillos made a little closer to home!

Looking for more ideas for pairings? Here are some authentic recipes from Rioja.