Have you discovered Malbec yet?

Chances are you’ve had it in a Bordeaux blend, but you may not have had it by itself because it was usually best as a blending grape.

However, in recent years, Malbec is coming into its own, and people are appreciating this grape on its own and in blends with a higher proportion of malbec. This has to do with advances in wine making but also with new places where the grape has thrived and developed a reputation for itself.

South America is one place where the production of Malbec has just exploded. Even better, we can find great examples of this grape at very affordable prices.

Here are seven reasons why I love Malbec:

6. While fruity, has a solid back bone to it.

7. I love turning people on to it!

Last year, in advance of Malbec Day April 17, several of us wine predators gathered and tasted four Malbecs under $20; read about them here. We were so enthused we did another Malbec tasting and twitter party on Malbec day a few days later. 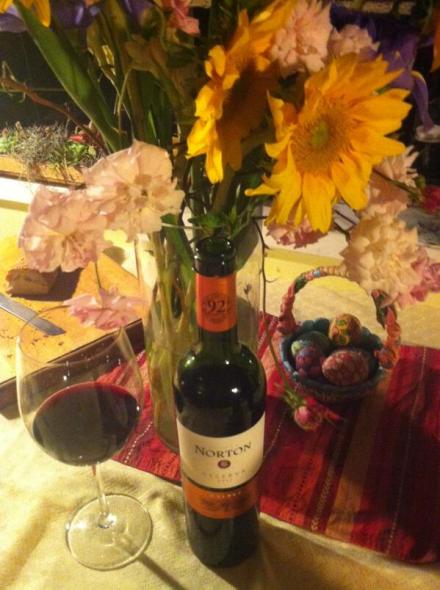 For Malbec Day 2014, Amy “The Crush” TC and I checked out a sample of the 2011 Bodega Norton Riserva Malbec hailing from Mendoza, Argentina that I received from online retailer Wine Chateau which offers 17,000 premium wines from around the world.

In the glass this wine is a deep shade of ruby with a light pink rim. On the nose this is overwhelmingly blueberry and menthol (think eucalyptus). Perfect for pizza or a rich BBQ sauce on chicken or ribs, or roasted duck,  there is lots of blue and black fruits (blueberries, blackberries, plum), black licorice candy, and sweetness backed up by a refreshing menthol. The tannins are cleansing and refreshing. Your appetite will definitely be whetted when enjoying this wine.

Bodega Norton was founded in 1895 at the Mendoza River Valley in the foothills of the Andes. The vineyards for this Malbec are over 30 years old. The wine was aged over 12 months in French Oak.

Here’s how to order this Malbec from Wine Chateau. When you get it, if you can stand NOT opening it right away, you’ll have it for next year’s Malbec Day! http://www.winechateau.com/sku1779065_BODEGA-NORTON-MALBEC-RESERVA-750ML-2011

One thought on “For Malbec Day: 7 Reasons Why I Love Malbec”