But actually, any alcoholic beverage made from fruit is wine.

I was first intrigued with this alcoholic beverage made from apples when I read Michael Pollan’s Botany of Desire. In it, he debunks the version of Johnny Appleseed that I, and likely, you, grew up with.

That’s the version where Johnny is merrily spreading seeds as he moves west. Like me, you probably imagined people picking yummy apples from the trees and chomping on them.

However, that is quite the Disney-fied version fueled by the apple industry in response to Prohibition.

Both Chapman and the apple “have been sweetened beyond recognition. Figures of tart wildness, both have been thoroughly domesticated…in both cases a cheap, fake sweetness has been substituted for the real thing,” writes Pollan (7).

The truth is apples from seeds bear fruit good for one thing: hard cider. And

Johnny Appleseed brought apples for alcohol production to the frontier.

In his book, Pollan explores how apples and other plants use sweetness as a biological desire, and how they exploit our sweet tooth with sweet flesh around mature seeds which we then distribute elsewhere in the world.

While some see Johnny Appleseed aka John Chapman as a humanitarian who brought vitamin C to the west, Pollan argues that Chapman is more like Dionysus, the Greek god who taught humans to make wine: “Really, what Johnny Appleseed was doing and the reason he was welcome in every cabin in Ohio and Indiana was he was bringing the gift of alcohol to the frontier. He was our American Dionysus.”

And apple cider was a lot safer to drink than the water in many cases!

Over a century ago, we had thousands of apple varieties, but today only a handful of varieties remain, ones that offer beauty and sweetness. These orchards of identical trees can’t compete with insects and disease pressure so as they become more vulnerable, apples get treated with more pesticides than any other food crop.

However, in some areas, cider is resurrecting these venerable orchards as organic oddball varieties might be harder to market as they are ugly and not as sweet. Perfect for cider. 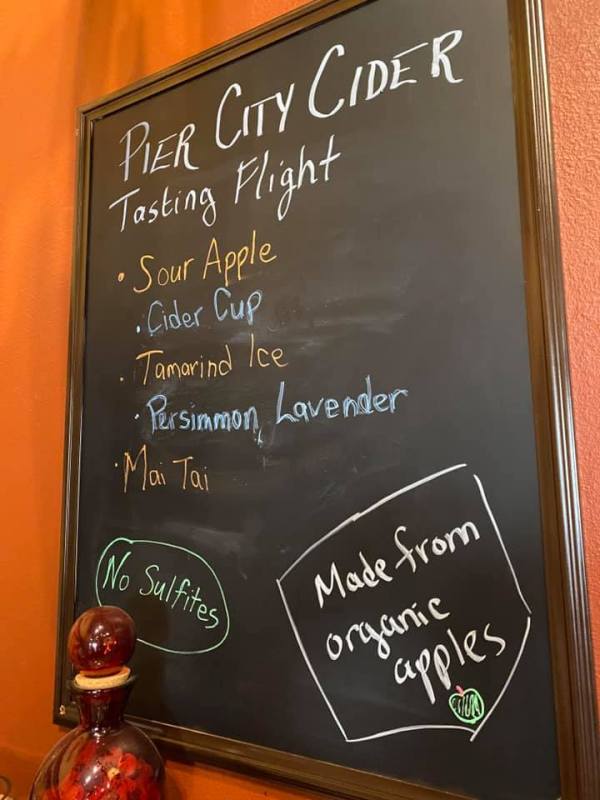 Just like with craft wine and craft beer, there’s a lot to learn about ciders which can be classified from dry to sweet and in appearance range from cloudy with sediment or hazy to clear, and in colour range from clear to brown depending and varieties. While in wine, still is more common, in cider sparkling is.

This month the World Wine Travel group of wine writers turn our palate toward cider; see links below to our articles. While some in the group sampled Spanish cider, there are so many exciting ciders being made in the US, and closer to home, literally, that we wanted to place our attention here since Ventura County has two excellent places to sample and purchase cider made by local winemakers.

Anna’s Cider is perfect for the beach

Dominic O’Reilly is the winemaker at Ojai’s Topa Mountain; learn more about that winery and his background here. He met his wife Anna in college, and together they have Anna Cider’s in Santa Paula, CA.

These ciders are more wine-like, just using apples instead of grapes, and are very light, bright, dry, subtle, and food friendly. And by dry I mean there’s no sugar. Aus in someone on  a keto diet can enjoy them. They also do not fine and filter and avoid sulfur as much as possible.

The hazy is “plain while the rose uses cranberries, raspberries and elderberries, and the cucumber ginger (not pictured because my husband drank them and recycled before I got a chance to taste any of them! Now there’s a testimony for you! NOTE: Sue does have one, but clearly I need to buy more!) 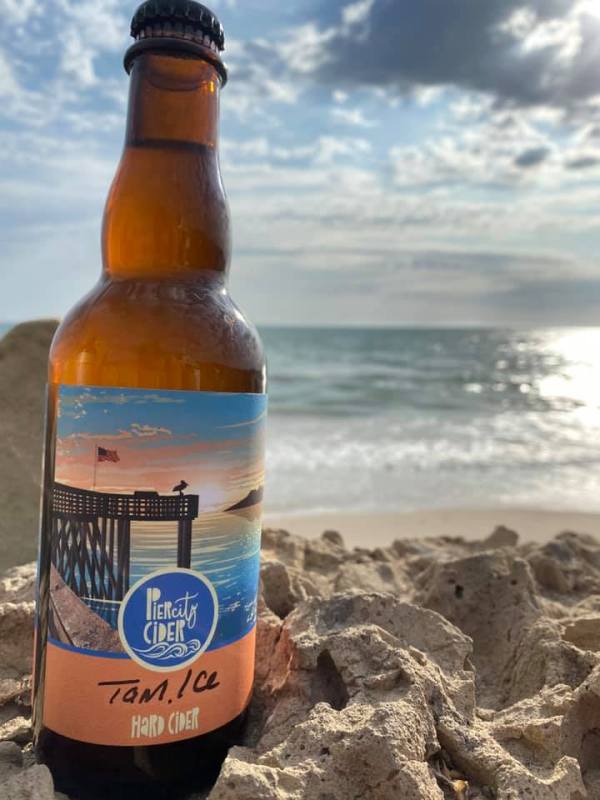 In contrast, Four Brix is a winery in Ventura that sources grapes from Centra Coast vineyards in Ventura County, Santa Barbara, and Paso Robles. When winemaker Gary Stewart’s wife Karen became gluten intolerant, they decided to make cider, but they wanted to do ciders that were completely different in style than their wines so that they wouldn’t be competing with themselves.

So their ciders have exotic flavors like tamarind, pineapple, and my favorite, the persimmon lavender. These are easy drinking ciders that are more cocktail-like than wine-like.

And these sulfite-free ciders are made from organic apples!

Our plan was to pair the ciders with pork prepared in the instant pot that used cider in the recipe. There’s lots of recipes out there that look so yummy! But then I found some beautiful pork chops on sale … and instead my husband prepared them on his new smoker with a salt and pepper brown sugar rub.

The ciders were a nice, cool, refreshing change from the Pinot Noir I might have typically chosen.

Sue and I usually taste together, but our summer plans conflicted with our cider tasting plans. Instead, I tasted the Pier City Ciders at Four Brix with a friend visiting from Tennessee, Heather Thurman.

But with beach traffic, we didn’t have time to also visit Anna’s Cider that day, and with my summer travel plans, I just couldn’t get out there.

So let’s consider this part one, and we’ll revisit these two cideries when we have time to do them justice! In the meantime, check these ciders out, and you’re invited to join our twitter chat at 8am Pacific.