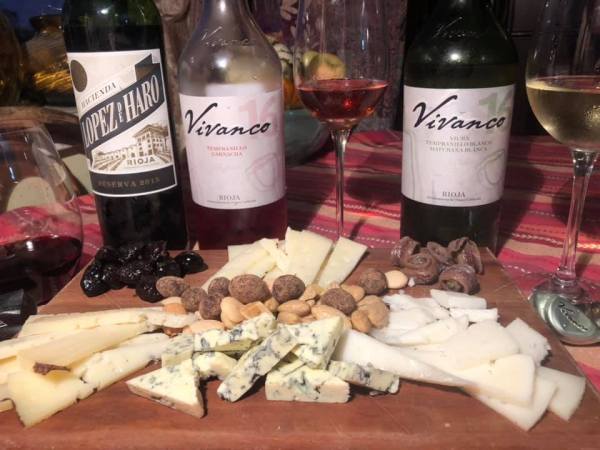 When I think about Tempranillo, I think of a robust, red wine that I want to pair with lamb.

But when I went to the samples cellar to see what we had for International Tempranillo Day which is held annually on the second Thursday of November, I found I had one red from Rioja, two rosado of Tempranillo and Garnacha, plus a white blend with Tempranillo Blanco.

According to Wikipedia, Tempranillo blancowas discovered in a Tempranillo vineyard in 1988: “while Tempranillo is a dark-skin variety used to produce red wine, the grower discovered that one of his vines had undergone a mutation that produced yellow-green clusters after veraison… Winemaker Juan Carlos Sancha of Viña Ijalba, which has 1.5 hectares of the grape planted, describes Tempranillo blanco as having “…fantastic acidity and aromas, and will combine well with Viura.”[5]

In 2007 Tempranillo blanco was officially sanctioned in the Rioja Denominación de Origen (DOC) and that’s the only place in the world allowed to grow it.

Tempranillo rojo on the other hand, is the grown everywhere — and there’s lots of it! Native to northern Spain, Wikipedia says that “In 2015, Tempranillo was the third most widely planted wine grape variety worldwide with 231,000 hectares (570,000 acres) under vine, of which 88% was in Spain.[3]”

That’s a lot of Tempranillo!

Unfortunately, Americans are not that familiar with this food friendly grape. While they may know red wine from Rioja, it’s similar to Chianti in that people don’t always know the grape behind the wine. (Chianti, by the way, is sangiovese while Rioja is Tempranillo. Oh and Chablis? Its Chardonnay.)

For more Tempranillo, check out “An American Summer BBQ with Spanish Rioja Wine: LAN Crianza and Beronia Rosado” which we did for last summer’s #WinePW. And for more about LAN wines, they are being featured in this month’s weekly Tuesday night educational #WineStudio (6pm Pacific time).

Over 100 years ago, Pedro Vivanco González grew grapes from a small family vineyard in Alberite, La Rioja. Grandfather Santiago continued with help from his wife, Felisa Paracuellos who also encouraged Pedro Vivanco Paracuellos, in the family business. In 2004, his children began Vivanco located in Briones on the foothills of the Sierra de Cantabria and on the banks of the River Ebro, an area with a mild microclimate and extraordinary chalky-clay soils. Their underground winery minimizes environmental impact, preserves the landscape, and balances temperatures to better age the wines. Read about two of their red wines here. Learn more about their story and a documentary my friend Zev Robinson did here. 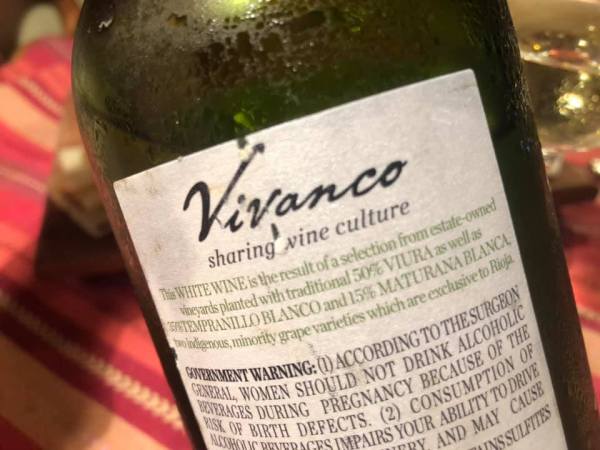 This is a very Sauv Blancish type of wine with lots of fun acidity.

Nose:  A little sulphuric funk, and a little bit of fresh grass, this is not a super aromatic wine. We did not get much off the nose when it was cold, as it warmed it became a bit more expressive

Pairing: This wine would be nice with oysters, ceasar salad, calamari, trout, almost any white fish. We both went for the anchovy wrapped caper which has a very strong flavor tamed immediately by the wine, bringing out a super long lingering mineral finish. The ocean is in your mouth for a very long time. It loved the mild Casa de Casera, and as it is a goat cheese, this is not surprising. Have a goat cheese with this wine and they will become fast friends. It was also nice with the Ibirico. 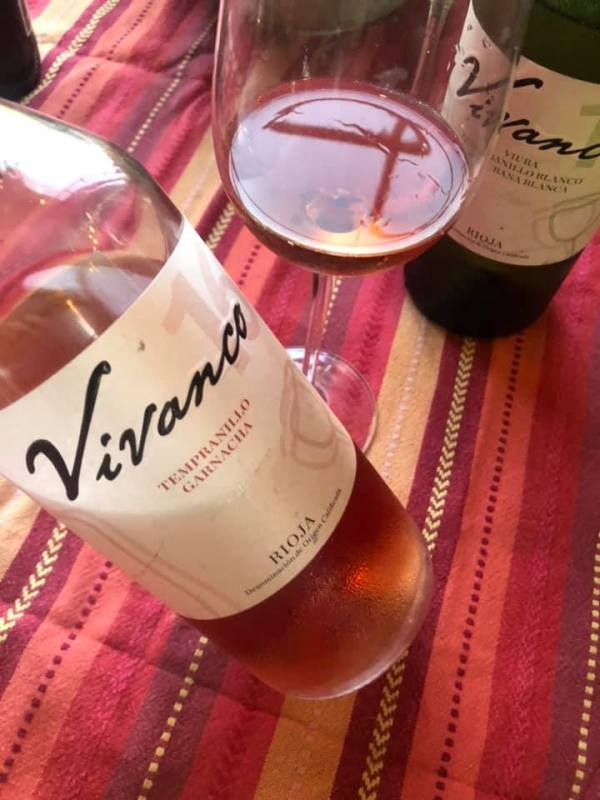 Nose: Floral and spice, very perfumey, especially as the wine warms in the glass.

Pairing: Something SPICY! I wanted a coronation chicken salad sandwich– a curry infused chicken created for the Queen’s coronation that we had in England last summer–something creamy and spicy. Sue wanted spicy grilled fish or shrimp tacos. Almonds were alright, but smoked almonds might be a bit better. While this wine went alright with all of the meats on the cheese plate, we both felt that it would work so much better with cured meats like a ham and cheese sandwich or salami and cured meats. Sue felt it was nice with the blue cheese, I felt that a creamier blue would have been better. 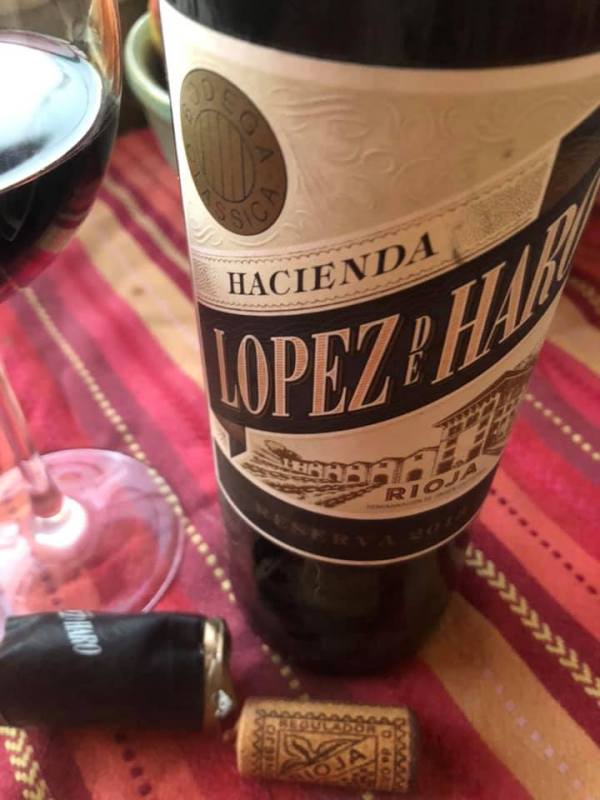 Color: Garnet, with a orangish rim.

Nose:  Lots of spice, black pepper, very faint green pepper, maybe a bit of jalapeño, even jalapeño jelly. Nice herbal qualities, sage. Then there is a bit of rich soil, then underlying cherry fruit, a bit of tobacco and leather. As the wine opens up in the bottle, a bit of sulphuric funk comes through.

Palate:  This is a lovely smooth textural wine from front to back. The tannins are very structured, balanced with fruit and acidity. Cherry, and earthy herbs. eucptlyptus, sage, mint. We were both impressed with the texture of the wine.

Pairing: Loves manchego cheese, also very good with the iberico. We did not even want to go to the anchovy wrapped caper, until Sue said she wanted those on top of a pizza with this wine. It loved the salt cured olives. It took on the blue cheese, but I felt that it would again be better with a creamy blue like Spanish Castello Blue. With the oven roasted potatoes there is a menthol quality to the wine. It loves the black pepper in the potatoes. It really liked the mushroom burger the earthy richness of the mushroom brought out the earthiness of the wine and sent the spice and fruit to the back of the palate. Sue also fried up a bit of the salami from the  cheese plate to put on the slider (much like adding crispy bacon to a burger) OMG over the top satisfying adding another dimension of flavor.

The burgers were 50% lamb and 50% bison. The richness and fattiness of the lamb worked out well for the Tempranillo.

Sue diced a bit of dried mushroom to put in the hamburger mix. We then sauteed some mushroom in butter, with garlic and a little of the red wine  to top our burgers with. Add a slice or two of Manchego to finish the burger off. The fresh tomato is also key to the complexity of this pairing. Manchego is not a cheese you would not usually put on a burger, but it goes so well with the Tempranillo.

This would be a great selection of wines to accompany a taco bar for a party.