Sue is big on bidding at silent wine auctions and other charity raffles. And often she wins!

Last year at the Ojai Wine Festival, Sue saw this library vertical from Ranchita Canyon and won these lovely three red wine blends. When we were brainstorming what we should do for Open That Bottle Night which rolls around on the final Saturday of February, she volunteered to share these — and to make a lasagna to pair with them! Plans to open three bottles plus lasagna called for a party, and so Marshall and I went to Sue’s house near the Ojai Valley Meadow Preserve to join John and his brother Barry plus Edie.

Along the way, we learned that Ranchita Canyon Vineyard is a small family run vineyard and winery you’ll find nestled in the north-eastern hills of the Paso Robles appellation. Most of their grapes they grow to sell, but select blocks they save to make their own wines, owner Bill Hinrichs says in an email. The label states  “the grapes thrive in the chalky limestone soil and produce high quality fruit from vines that have been tended with the utmost care.”

“The Ranchita Red is our every day house wine,” states Bill about the wine they first started making in 2005. “We wanted a lower priced wine, and just put together five varietals that we felt were not needed for other purposes. This has become our tradition with using five varietals, and different every year. We just feel that if you blend good wine with good wine, you will end up with good wine.”

Bill reports that since 2009 they have made six blends and each have their own story. In addition to the popular Ranchita Red, the other five are a Super Tuscan; a Bordeaux blend with all five primary varieties; a Petit Verdot and Malbec blend called Duette; a Cab Sauv and Petit Verdot blend called Smooth Operator; and a Grenache / Petite Sirah blend named GPS.

“These blends are developed through tasting each year,”  says Bill, “with Teresa and myself primarily doing the sampling to put the blends together.”

All their wines except their Albarino are Estate grown, with a total of eleven different varieties. “We are primarily growers, and sell about 85% – 90% of our fruit, while taking a little from each block to make wine,” reports Bill. “We were home wine makers, and made our first commercial wine in 2003.”
They opened the winery part on March 14, 2008, and they are getting ready to celebrate their 10th anniversary. In addition to a list of almost 20 different wines, they have three port styles.

“We are having fun,” says Bill. And that’s possibly most important!

With all steps done by hand, they produce hand crafted wines compliment many foods: one of the great things about of lasagna is that there are so many different flavors that marry together and make a complex meal that pairs with many red wines. Surprisingly, we don’t do it more often! It was a wonderful foil for these three wines, and next time we do it I swear I will get Sue to give up her recipe!

color – dense, like theatre curtains; when the light hits it, it shimmers.

Barrie felt that it was soft cherry. I got anise on the palate enhanced by the  fennel in the sausage, plus Sue seasoned the meat with wild fennel sea salt. The bell peppers in the veggie lasagna was fantastic with this wine.

Sue: While this wine was wonderful with the sausage lasagna, it was so, so good with the veggie lasagna, the vegetal combination brought out so much flavor in the wine.

With its full body, you could also pair it with a Santa Maria style BBQ and a brilliant sunset.

color – these wines are similar in density in color and density. The color is dense. Edie felt it had the heaviness of welches grape juice.

This was the least impressive of the three vintages for me, however it went perfectly with the meal, because of  the complex flavors of the lasagna. Sue got lots of minty sagey herbs on the nose. even rosemary, and I also noted the bright herbals.

palate – Sue got mint and more cooked fruit on this vintage. There is a meatiness on this wine. Lots of earthy qualities. I found it spritely and bright possibly due to the minerality. The finish is like cocoa powder, dry, chalky,

This vintages yearns for food more than the 2009 vintage. When paired with the lasagna, this wine is perfectly fantastic.

color – again very rich and dense, similar to the other vintages,

palate -sour pie cherries, on the front of the palate. This is a very drinkable wine. After opening up for a while, this wine is so so smooth, with some mint on the palate.

This is a $20 red blend that is 12 years old: you would not normally think to lay this wine down. What a great investment. This is such an approachable wine.

These big dense grapes that they are using makes for a big dense wine.

At the end of the evening, we were surprised that more people did not drink more of the 2007 as this was such a favorite!

While these wines were amazing, they were not necessarily dessert wines, The pie while not too sweet with the mascarpone to make it rich, was not a good pair with this wine.

The Ranchita Red wants a savory profile to make it perfect. It loves spices and herbs, or a wonderful cheese plate 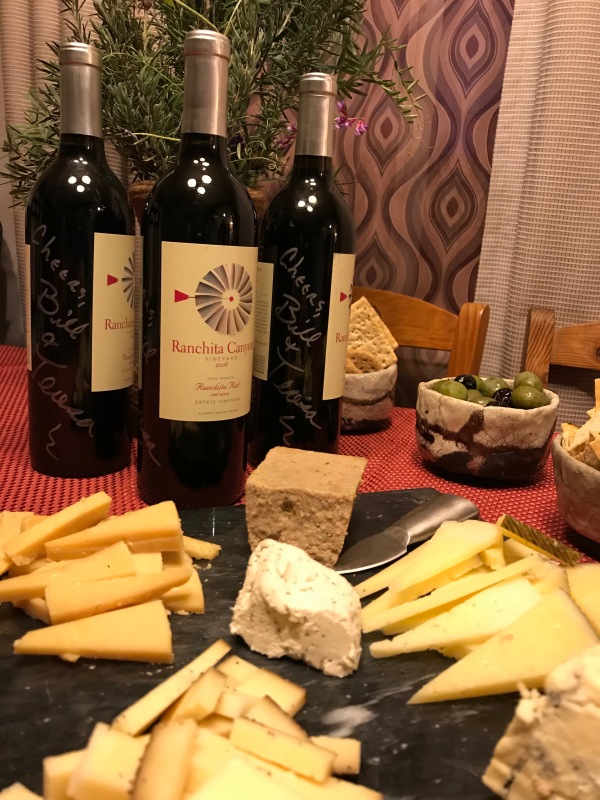 This evening was a lot of fun! Thanks Sue for hosting us and for providing the wines and for making the lasagne!