Just in case you missed tonight's #winestudio with @FerrariTrento there are 3 more sessions! Nov Tues at 6p pic.twitter.com/3IKZbfxvYL

What? There are CARS bubbling out of the Italian Alps? No I don’t mean that kind of Ferrari. I mean bubbles from the sparkling wine grown in the Alps and made in the winery started by Guilio Ferrari over 100 years ago!

On Tuesdays in November from 6-7pm I am participating in Protocol Wine’s Wine Studio Project tasting and education series with Ferrari, a sparkling wine producer from Trento which is located in the Dolomite region of the Alps in the northeastern part of Italy. To learn with us about Ferrari this month, check out the hashtags #winestudio and #FerrariTrento as we taste Ferrari’s award-winning  wines: Brut, Rose, Perlè 2007, and Guilio Ferrari 2001.

As early as 1906, the wines began winning awards:

It’s important to remember that sparkling wines are for more than toasts at a festive occasion. Sparkling wines are a wine, and as such, many pair well with food. In order to experience more of the aromas and flavors and not just release and showcase the bubbles, consider using a tulip shaped wine glass instead of a flute.

What #wine glasses for these #bubbles? Trend is toward tulip shape like this sauv blanc #winestudio @FerrariTrento pic.twitter.com/Xsv0HKiWuq

During the first week, we learned the story of Giulio Ferrari — how he studied in Champagne, how he dreamed of producing quality sparkling wine in his native Italian Alps using the classic method, and how he planted Chardonnay to do so. Now,  “three generations later, the Lunelli family epitomizes the very soul of Ferrari – tradition, respect and a fierce love of the remote, mountainous and picturesque region where the grapes are nurtured to make Ferrari into the most beloved sparkling wine in Italy.”

A great sparkler for $25, the Brut has a nice yeasty delicate flavor, with crisp apples, plentiful minerality, and beautiful bubbles. Made from 100% Chardonnay grapes grown sustainably by over 500+ partner growers, the Brut is the first sparkling wine that Ferrari produced, dating back to 1902.

We had this Brut with crab and lobster cakes on a bed of arugula, oysters on the half shell, a caprese salad, various soft and hard cheeses, and with sushi. It wasn’t that great with the sushi — but it wasn’t really great sushi either. Lovely with the Kumamoto oysters, the Brut bring out the sweetness there while it heightens the experience of the oyster by exagerating the ocean flavor of the Pacific Oysters. Scallops, clams, sweet prawn, and lobster will all pair nicely with this sparkling wine; the lobster and crab cakes were tasty. While a surprising winner was the caprese salad, the oysters were our favorite pair. 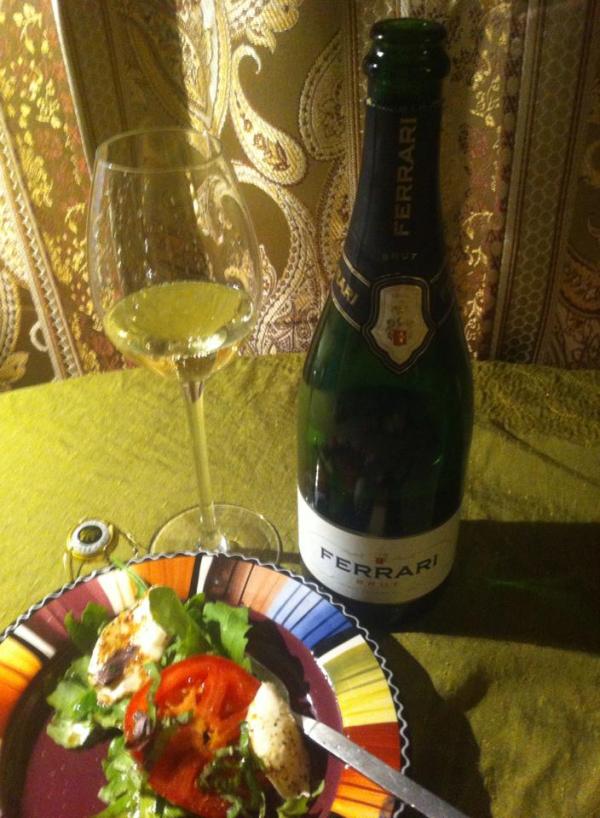 We would definitely buy this wine — we thought it offered a lot for $25.

Coincidentally, also this week I, along with 11 other wine writers, will participate in an online tasting of three premium wines from another Ferrari — this one Ferrari-Carano Vineyards and Winery. WinemakerSarah Quider will be on hand Thursday, November 12 from 5-6 p.m. PST as we taste three wines selected by owners Rhonda and Don Carano: 2012 Reserve Chardonnay from Carneros (SRP $38), 2013 Anderson Valley Pinot Noir (SRP $36), and the 2012 Tresor Red Blend ($52). Join the conversation on Twitter: #FCWinterWines.

With Special Guest Dan Amatuzzi, Wine Director @Eataly, tonight’s Wine Studio explores the Italian art of living, an ideal that encompasses every aspect of Italian life.  The wine is chilling now and we will be pairing it with various cheeses and meats and maybe a grilled lobster tail (but I think we’re doing turkey burgers for dinner because that’s what my husband bought at the store!) If I get a minute, I may peruse these recipes on the Ferrari website and see if I can pull something off like this Neapolitan pizza which is one of our favorites to throw on the grill and they suggest to pair with the rose. Bet it would be good with a caprese salad too…

“Instead of cutting the basil with a knife, break it into small  pieces by hand directly on the pizza. In this way the basil will maintain its fantastic smell!” advises ALFIO GHEZZI FERRARI’S CHEF.

“Rediscovering the value of biodiversity is another step that our company has taken in the direction of creating a more natural approach to viticulture and of having a minimal impact to the environment.  The farmer has to transform himself from product supplier to custodian of his own land,” said Marcello Lunelli, director of agricultural activities and enology of the Lunelli group  here.

Wine Studio points out that “Ferrari is all about mountain winemaking and sustainable agriculture, practiced in its estate vineyards and reinforced by long-standing grower relationships. The Lunelli family is extremely conscious of the biodiversity of the region, implementing programs involving the health of bees in the vineyards and recently becoming Biodiversity Friend certified.”

As we discuss this next week, we will taste Perlè 2007 with Slow Food USA @SlowFoodUSA

“All of the vineyards owned by the Lunelli family, including those of the Ferrari Winery and Tenute Lunelli, are cultivated according to organic agricultural principles, with certain vineyards already certified organic and others in the process of conversion.  The 500 families of vine growers supplying grapes to Ferrari adhere to organic principles outlined in the “Vigneto Ferrari” standards” (source).

In the final week, we’ll focus on how Trento terroir is interpreted from grapes to glass, and how sustainability and biodiversity is captured and expressed in the bottle as we taste Guilio Ferrari 2001 with special guest Christy Canterbury Master of Wine @canterburywine.

I have a lot to be grateful for this Thanksgiving!