This year for the Pinot Noir Smackdown, I’m betting many post-WBC bloggers are rooting for and writing about Oregon Pinot Noir aka #PinotSmackdown #OR. I know that the most memorable pinot noirs for me right now are from my trip last August.

Like many of the 450 attendees to the 2012 Wine Bloggers Conference in Portland, I joined a pre-excursion trip which included a late afternoon drive to the massive and beautiful King Estates for a scrumptious dinner (deserving of its own blog post) followed by an early morning jaunt from our hotel in Eugene to the Pfeiffer Winery in the southern Willamette Valley and in the northwestern part of Lane County.

It took us about 30 minutes to drive the scenic country roads, passing by alpaca farms, hay farms, forest and finally grape vines to arrive at Pfeiffer where we were greeted by Robin and Danuta Pfeiffer, an enthusiastic, energetic, boisterous and attractive couple.

At one time, Danuta was the co-host of the 700 Club. When Pat Robertson ran for President, she started over and came to Oregon to write a book and be on Air America.  Eighteen years ago, she placed an ad describing herself– and looking for a man who could spell. Robin responded with an invitation to go sailing.

On that first date, Robin Pfieffer brought an unlabeled red wine saying, “It’s a little something we make–pinot noir.”

When he started talking about it, and what commitment it takes to grow and make, she fell in love not only with his wine but him. He said his “antenna was already up.” Two weeks later, he proposed. And they’ve been making wine and more since.

Our session began with a lesson from Danuta on wine glass etiquette–we all need a wine glass Nazi in our lives every once in a while. She reminded us all not to mug the bowl but to hold the wine glass by the stem. This was followed by a pinot noir tutorial.

The three meats Robin likes with his pinot noir? Lamb, salmon, and tri-tip steak cut on the bias. For vegetarians, he recommends a rich vegetable quiche.

“Let them together seduce you–take your time with the wine,” Robin said. But always swallow your food before you taste the wine, he warns.

COLOR: Use a living light source–like a candle– and hold the glass over the candle to let the light bounce around.

What does the color do–is there a ring around the outside edge, how does it refract in the glass? You want a gem like quality. The ideal color is subjective; if it’s more purple, it’s younger.

NOSE: Everyone picks up different scents in a wine–some people pick up the faintest molecules. There are things we don’t smell–black holes–no matter how much someone else might smell it.

Swirling moves the molecules around and moves them up the stem of the glass the first sniff gets it–you like it or you don’t. The nose should make you respond ”OMG I want to taste it!” Not a description of what it smells like, but do you want to taste it or not.

TASTE: Take your time, swirl, and “get” the wine.

In Robin’s opinion, pinot noir is at the top of its game in 3-10 years while heavy reds like cabernet sauvignon take 3-15 years.

Pfeiffer sells 90% of their grapes to King Estate and keeps 10% for themselves to make about 1200 cases. Originally, they raised sheep on the property but when a French wine maker came calling and waving wads of money for the family property, Robin investigated and found he was sitting on prime pinot noir growing land.

As they say, the rest is history, and one of their pinot noirs was served at President Obama’s inauguration (2007–full of earth and berry). We tasted a number of their wines, reds and whites as well as a tasty tawny port (made with traditional Portuguese grape varietals, fortified with brandy, aged for eight years $28 for a split) and the unreleased 2010 (really delicious now, going to blow your socks off when it’s released in a year or two). Prices range from $14 for the whites and rose to $210 for the 2005 Pinot Noir (which we also tasted!) Pfeiffer wines are unfined and unfiltered, letting the pulp provide the wine with the essential oils. In Robin’s opinion, the 2005 is the best year ever for pinot noir in the Willamette Valley.  Here’s my tweet tasting note about it:

Their reserve wines use new oak while their “Blue Line” uses neutral oak. I was also quite fond of the 2008 ($60) which was accessible, fresh and fruity, lots of cherry ($60).  But I suspect my favorite was the elegant 2010  of which there is only 250 cases.

Located in Oregon’s prime south Willamette Valley, our ultra premium, sustainable 70- acre vineyard is one of the oldest vineyards in the state with a reputation for producing world class pinot noir and pinot gris. As the first solar-powered winery in the south Willamette Valley, we were awarded a “Best Winery Experience” by the readers of the Register Guard Newspaper. Our tasting room is a candle-lit cave offering a personal, one-on-one wine tasting experience, including our famous Pinot Clinic held in the grotto with owners, Robin and Danuta Pfeiffer. Our exquisite, small lot productions are only available through our tasting room and wine club, and are not distributed to stores or restaurants.

From a weekend of amazing pinot noir, two other highlights from WBC 12 include: 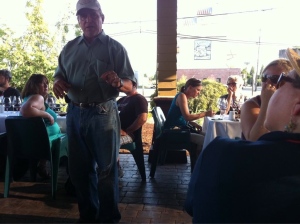 –Ken Wright’s pinot noirs that we tasted at the Tyrus Evans train depot tasting room in Carlton as part of our #cuffedincarlton Bus 8 adventure. While it was really HOT, and the wines would have shown much better if they were cooler, I went away wanting another chance to taste his wines. (This too is deserving of one or more blog posts!)

–Johan Vineyard’s spicy, carefully crafted pinot noirs which I tasted during the Thursday night reception from the Oregon Wine Board and then again after the red wine speed tasting delighted my taste buds each time and left me craving more! (Do I need to mention there are more than a few blog posts in this topic?)

I would be negligent if I didn’t mention my favorite  pinot noirs that I tasted on my trip to Oregon last year, Coleman Vineyards (more blog posts!). I was disappointed that they didn’t participate in WBC12, but I recognize that it is difficult when you are a family run, boutique producer to make that engagement.

So what will I be opening for #PinotSmackdown? Perhaps a Coleman Vineyards…or maybe one from a local favorite, Ojai Vineyards.

What are you drinking tonight? And what region are you rooting for?

8 thoughts on “#PinotSmackdown: How To Taste Pinot Noir according to Robin Pfeiffer”