In this month’s edition of Wine Blogging Wednesday, #76, host  Adam Japko aka Wine Zag prompts us to revisit the Barossa legendary wine region of Australia, located just north of the port city of Adelaide in the underbelly of the continent. In his prompt, he says Australia is the “latest comeback kid” –and that an appreciation of Oz wines has boomeranged.

Lettie Teague from WSJ also wrote recently on the “Rise and Fall of AUS wine.” On March 8, 2012, in her post she argues that wine from Australia has yet to boomerang and says that sales are still down. 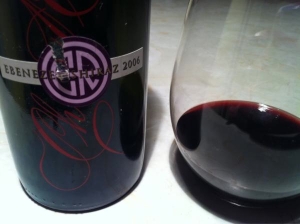 “Entire import companies like Dan Philips’ Grateful Palate have disappeared,” writes Lettie Teague. “Grateful Palate went into receivership about two years ago and Philips himself seems to have vanished.”

Further, information that Wine Australia gave her indicates that in 1998, Parker reviewed only 35 AUS wines; five years later, he was reviewing over 600 AUS wines, clearly a sign of a huge boom, fueled in part by high scores from Parker and to folks like Dan Philips who started Grateful Palate to showcase smaller, distinct AUS winemakers.

Lettie Teague posits that i

n addition to the worldwide recession, Robert Parker turned the territory over to Jay Miller (Robert Parker lets Jay Miller loose on R wines) in 2007 (yes, that Jay Miller, that one recently embroiled in the fiasco in Spain–you can get all the juicy details at Catavino); AUS wines are currently being reviewed by Lisa Perrotti-Brown.

Obviously, the rise and fall and the possible rise again of the AUS wine industry is in dispute, and far beyond the scope of this blog, the interests of its readers, and my own authority. What’s left are the wines–and the stories about those wine.

My own story intersects here because in June 2008, I interviewed with Dan Philips at the Grateful Palate offices in Ventura County and was hired to release the bottleneck and help be the voice for him and for winemaker Chris Ringland, to get more of the stories about their wines onto their website, to get a blog and other social media channels going as well as some other writing projects. By August, as the economy tanked, the job was evaporating. By October, the person who had hired me and who I would be working with, was gone. By November 2008, I attended a warehouse sale there and by January 2009, the local warehouse was gone and soon there were rumors of bankruptcy and worse–growers and wineries not getting paid. 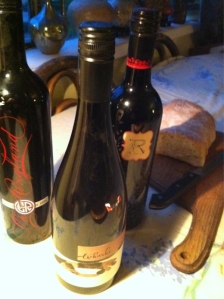 So what’s left of The Grateful Palate Imports seems to be stories and bottles of wine. I wish now that I bought many cases of wine; now that I’ve tasted them and know what I love and can’t get more because they’re impossible to find or out of my

I do have about a case left in the cellar of wine from Grateful Palate Imports. So for this Wine Blogging Wednesday, the Return of the Barossa Bommerang (or not), I opened two of three bottles.

First, with a little melancholia and some wild duck in a vermouth blueberry sauce, I went with a Chris Ringland 2006 Ebenezer Road Barossa Shiraz. I met Chris the day of my interview and my very first wine sample was this wine of his before it was even released; it was offered to me at the end of my interview and after I accepted the job. We went camping with friends that weekend and it’s fun to read now what I wrote about the wine in this post: Chr

is Ringland’s Ebenezer Shiraz 2006: rich but not a tightwad which for quite some time was one of the most popular posts on this blog.

Several years later, what I said then holds true: the color is incredibly dark purple with a ring of violet, it continues to remind me of dark chocolate cocoa and dried blueberries, and it’s huge and rich and balanced. For our anniversary, my husband scored wild duck breasts from a friend and my husband marinated them

in herbs, wrapped mine in bacon, grilled them, then served them with blueberries cooked in vermouth.

This is a flat out delicious wine and the pairing of this Barossa Shiraz from Ebenezer Road and wild duck with blueberries was nothing short of amazing, mind blowing. I couldn’t help myself –I just kept saying “oh my god this is so good” until my 8 year old threatened to take away my allowance.

More Shiraz like this would go far in redeeming AUS wine in many people’s minds–and have them reaching to catch that boomerang. 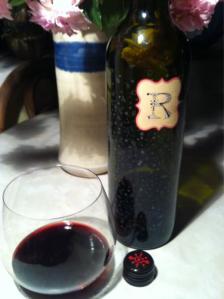 We also had an arugula salad with portabellas cooked in port, sheep’s feta, and drizzled it with some blueberry sauce which was also brilliant.

Then this morning, I was at the grocery store wondering what to have for dinner tonight when I spied two beautiful filet mignons on sale for $11, down from $20 and perfect for a Wine Wednesday  with the 2005 R cabernet from Barossa that I picked up for around $12 at a Grateful Palate warehouse sale. After a very close Little League game, my husband the coach seasoned the meat and grilled it to perfection stuffed with blue cheese which we enjoyed with  roasted red potatoes and more blue cheese and a field green salad with duck and blue and blackberries and a huckleberry vinegrette. My husband is more of a cab lover than  shiraz and he could not get enough of this wine–and it’s a school night and it’s 15.7% alcohol! Seriously, I had to hide the bottle!

It was fantastic with the filet and blue cheese–the rich entree needed a wine with plenty of pizzazz and this wine has it all. Very satisfying.

The color is inky dark with a coral ring, the nose is smoky cherry, with plum and blueberry. Nice full body, rich lingering finish with a hint of candied tangerine. While it has lots of fruit and high alcohol, there’s plenty of balance to make it all work. An amazing wine for $15 retail, if you can find it…

Honestly, I had this wine when it was first released, and I was seriously disappointed so I didn’t expect that much. But here, several years later, the wine is drinking beautifully and I’m sorry that these wines aren’t being made and exported.

In this article,  Jay Miller gave 89 points to the 2005 r Cabernet Sauvignon from Barossa and says it spent 12 months in seasoned French oak. He describes is as “purple with an expressive perfume of cedar, smoke, tar, and black currants. Ripe and layered on the palate, it has a medium- to full-bodied, fruit-driven personality with plenty of spicy black fruits, excellent concentration and depth, and a lengthy finish” and recommends drinking it in the next six to eight years.

So what’s Chris Ringland doing these days? He’s got a project with 100 year old wines in Barossa, and rumors have it that he and Dan Philips are nosing around Spain looking at projects.

One last thought: it’s hard to write about Grateful Palate wines and NOT mention the wonderful art and design elements that infused every element of their brand. In fact, that was one reason I was attracted to working with them–the high quality of the aesthetics of their product. When I talked with Dan during my interview, we really connected first about art, about aesthetics. As a poet and artist myself, I understand and appreciate the importance of the right word, phrase, color, design. The opportunity to work with Grateful Palate came out of the blue–and I am still open for the wild blue to open up in front of me again since the latest project seems to have fallen through. Sigh.(Got ideas? I’m all ears: email me! gwendolynalley AT yahoo DOT com)

It was really hard to accept that my dream gig came and went so fast: that in June I interviewed, accepted a job, quit my teaching job, then had no job to go to when I was supposed to start in August: it was very strange that September to not be working, in school or teaching college and that inspired me to write and produce this video: