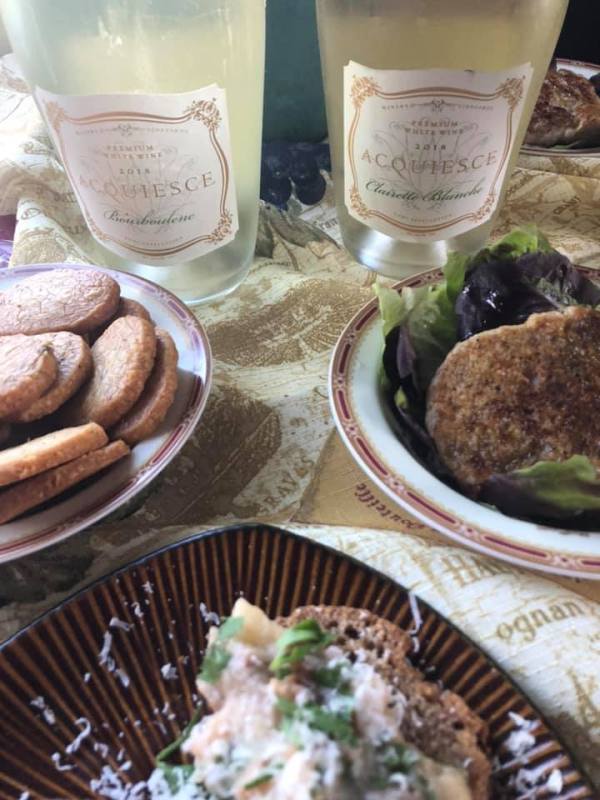 To acquiesce is to agree with something, to give in, to go along. It comes from Latin meaning “to rest” as in to rest a case or to give tacit agreement.

So you’d think that because Lodi’s Acquiesce Winery focuses on white wines in a region known for red wines, or because Acquiesce features obscure white Rhone varietals, that the name suggests that they gave in– that perhaps someone had already planted these vineyards with these white grapes, and they just acquiesced.

But that’s not the case.

The story goes that Rodney Tipton was listening to k.d.lang ‘s song “Acquiesce.”

He told his wife Sue that one day they’d have some land where they could enjoy the sunrise and the sunset and they’d call it “Acquiesce.” And that’s how they landed in Lodi on an 18 acre property with a zinfandel vineyard and an old barn, where they set up shop as winemakers, and a property they called — you guessed it — Acquiesce.

But they weren’t interested in making wine from the grapes they grew; they sell the zinfandel. Nope, Sue Tipton wanted to make white wine using grapes from the Rhone River Valley in France.  She’d tasted one from Chateau Beaucastel in Chateauneuf-du-Pape, and fell in love.

Rod acquiesced (see what I did there??), and in 2008 they planted Grenache Blanc, a grape more typical of the Rhone than anywhere in California. More cuttings of various Rhone grapes came from Chateau Beaucastel partner Tablas Creek in Paso Robles.

Diurnal differences in the summer averages almost 25 degrees in CdP and over 30 degrees in Lodi. Major mountain ranges influence the vineyards– the Alps for the Rhone and the Sierras for Lodi — and rivers too: the Rhone saunters through the Rhone valley while the broad Mokelumne River descends from the Sierra to bisect Lodi on its way to the ocean.

Cooling winds breeze through both regions: for Lodi, there’s a gap that draws cool evening air from the Pacific as well as cool air from the vast Sacramento delta, and in the Rhone, the “mistral” wind, a cold dry north or northwest wind gets up to highway speeds as it races down the Rhone Valley to the Mediterranean Sea.

In CdP, varied soils include stones covered in clay, pockets of alluvial sediment gravel, calcareous clay, and sand while Lodi soils are also quite varied, but in general Acampo is alluvial, sandy, gravel. 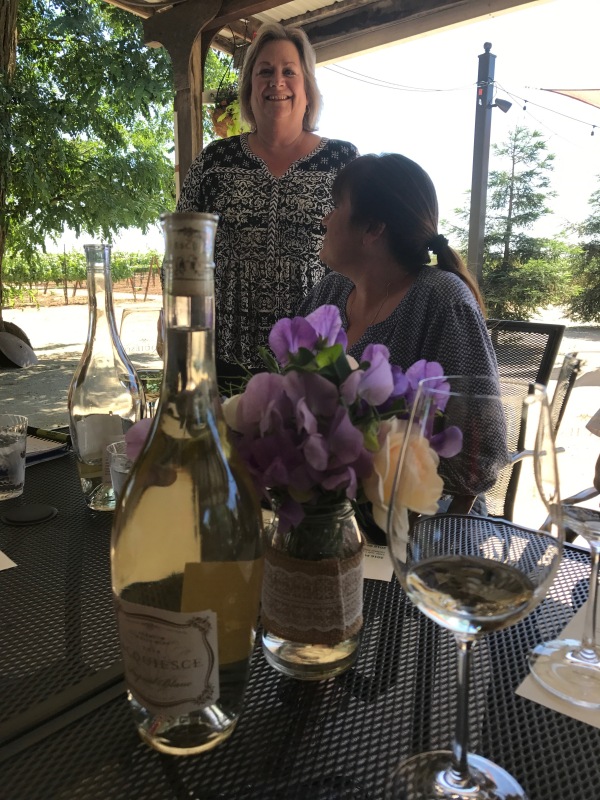 In a 2018 interview, Sue told me that “Our soils are river bottom sandy loam soils which were part of the banks of the Mokelumne River before the dam was constructed.  Very fertile soils which produce very balanced fruit driven wines.” Because of these factors, Sue said there’s a

“huge interest in Rhone whites in Lodi.  It’s a great location for growing these quality grapes. We have a climate very similar to the Southern Rhone and our weather is actually more forgiving.  We usually don’t get rain during the summer and in France they deal with rainstorms and hail throughout their growing season.”

Once you taste these wines you’ll know why everyone wants her grapes — and her wines! She usually sells out by Thanksgiving!

Note: This is part 3 of a three part series about Rhone white wines in France and in California– 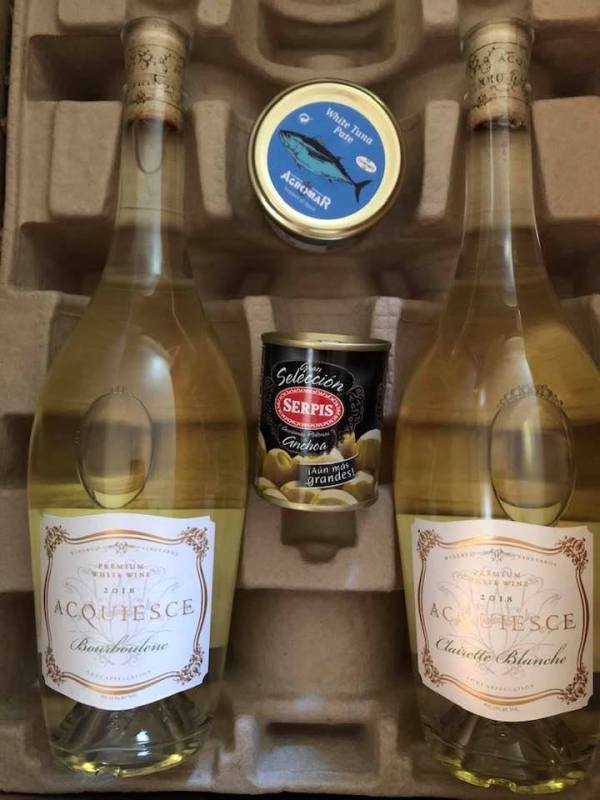 Because we love their savory shortbread crackers and because we received a tin of olives and a jar of tuna pate, we decided to pair these wines with appetizers and ideas from the Acquiesce website. 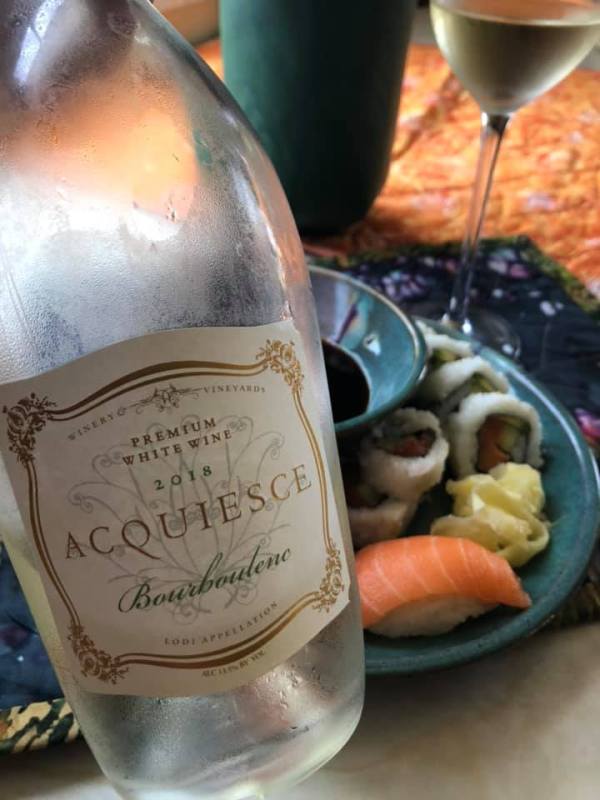 Color: Pale as pale can be, a bit of green tinge.

soft, like a cool summer night as the earth is cooling off in the evening…

Palate: Fantastic mouthfeel, the lemon chiffon comes through with acidity at the tip of the tongue. Clean yet lingering finish– the silky quality and the complexity. Rose petals, honeysuckle, great complexity.

Pairing: The beans had a lovely rich flavorful characteristic, the wine cuts through the richness in the food and becomes so nicely expressive. The anchovy olives went nicely with this wine, the acidity cleanses the palate of the rich olive. We also loved the wine with the tuna pate on top of the crackers. The scallop pancakes were both light and rich at the same time. With the wine being so cleansing and vibrant, it compliments the richness of the meal, and brings out lovely fruit in the wine.  Sue kept wanting to go back to the bean appetizer, and the tuna pate; the wine thrives off of rich creamy salty foods. 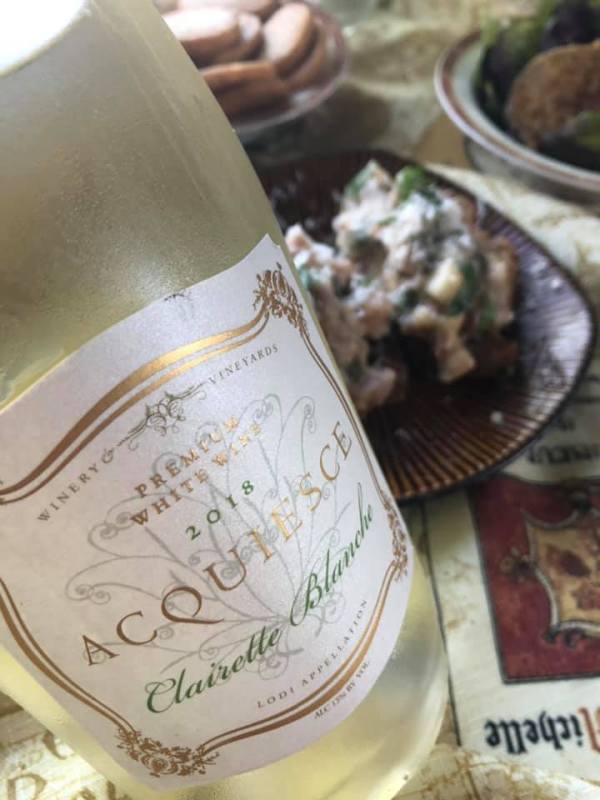 Paring: While the Bourboulene cuts through the richness of the bean appetizer, the Clarette Blanche integrates in to this meal.  While this wine was nice with the anchovy olives, we preferred them with the Bourboulene. The tuna pate was so fabulous on the gouda cracker; the rich creamy wine loves the rich creamy pate and cracker. Fabulous with the scallop potatoes which were rich and light and summery, and the Clairette brings out such a richness in the dish that isn’t there without the wine. There is more perfumey floral elements on the palate with the two together.

PS When I visited in June 2017, I also fell in love with their rose which I purchased and we wrote about here. 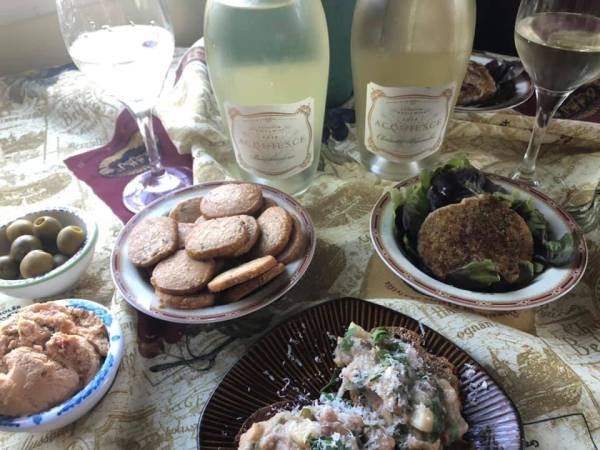 4 thoughts on “Go Ahead, Give In, Acquiesce To These Rhone Whites from Lodi CA”