The best-selling solo artist in the history of recorded music made hits in rockabilly, pop, country, blues, and gospel, was awarded four Grammys including  aGrammy Lifetime Achievement Award at age 36, and was been inducted into multiple music halls of fame. 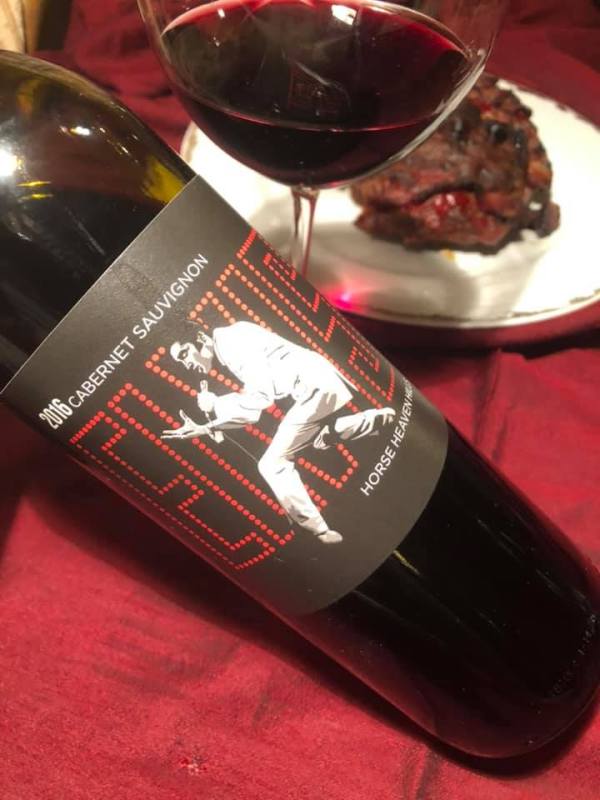 And I’ve got the perfect wine to celebrate!

Last month was the 50th anniversary of the Elvis “Comeback Special.” To commemorate this event, Winemaker Lot18 “teamed up with Elvis Presley Enterprises LLC, to produce a limited-edition Cabernet Sauvignon to celebrate the iconic singer and the 50th anniversary of his legendary ‘68 Comeback Special. After not performing for over seven years, Elvis took the nation by storm on the night of December 3, 1968, thrilling audiences and reclaiming his throne as the “King of Rock n Roll” in a single night.” This limited edition wine makes a great gift for fans and winelovers alike. Available exclusively at Lot18.com/Elvis while supplies last.

So what to pair with the Elvis Cabernet from Washington?

Elvis is famously known not just for his musical passions, but for his love of BACON which he put in his peanut butter and banana sandwiches!

Mendocino Farms Sandwich Market in Moorpark is offering their version through Sunday using creamy, natural peanut butter, Applewood smoked bacon, caramelized bananas, honey roasted almonds, and green apples on panini-pressed ciabatta which they say will have you “All Shook Up!”

On Sunday, we stopped by Jacks and Joe not far from LAX and downtown and near USC, the Natural History Museum, and the California Science Center where we stopped to see a different King — the Boy King, King Tut. Here’s their take on the King of Rock n Roll’s sandwich — as flapjacks!

While Sue was game to make his famous PB/bacon/banana, to me they sounded interesting but terrible paired with this bottle of Elvis wine.

Sue did some research and found a peanut butter and bacon bruschetta, and my research revealed that he also loved meatloaf with bacon which I bet would be wonderful with this Washington Cabernet.

So I suggested we make a BISON/BEEF meatloaf that uses Ritz crackers (which is how we always made it at my house growing up and my dad reminded me of this the other day) and horseradish, is slathered in homemade BBQ sauce, and then covered in BACON! (We somewhat followed this recipe, but we were out of milk…) It came out really well (but not quite as good as the bison meatloaf we had at the Four Points Lodge located atop the Four Points chairlift on Storm Peak at 9,716 feet above sea level at the Steamboat Springs ski resort — it  was full of so many layers of subtle herbs…) As expected, it paired great with the meatloaf.

This is a wine with serious chops!

It is not heavy, but has some meat to it with a minty quality with a nice mouth feel.

As easy and accessible as the music of Elvis is to our ears.

Pairing: We loved it with the meatloaf, especially the sauce. I’d try it with a burger with BBQ sauce or blue cheese, ribs, braised meats in a tomato based sauce, bison or beef chili, mole sauce and tamales. It is a hit with big bold aged cheeses like aged gouda, or a nice blue. We also felt this wine would compliment an Italian meal

Did you know aged rose is a thing? How about a rose from Provence with Cabernet Sauvignon? Check out there latest on Wine Predator for details about @chateauvignelaure !
Bye bye Mammoth! Thanks for a great birthday weekend!
Join me on a wine adventure in 2022! Please take the @trovatrip survey in my bio to help decide where we should go first!
Rhian Teasdale and Hester Chambers with Wet Leg performed for the first time in LA tonight!
Rhian Teasdale wailed on guitar tonight at The Echo in Echo Park in their first LA CA performance ever! Great show gals n guys!
Cooking paella on a hand built cob wood burning oven using grape vines.