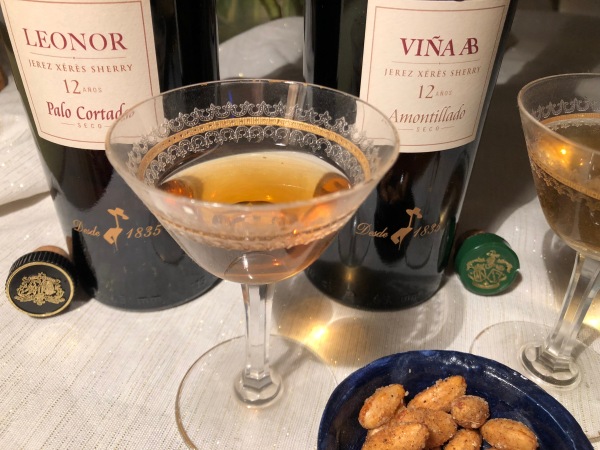 or maybe all you know about the liquid form is cheap sherry wine for cooking, well, it’s time for you to discover that sherry is not only a thing, but a beautiful thing. Sherry may be an acquired taste, but Sherry is definitely worth getting to know!

And now’s the time because this the final day of International Sherry Week! And with fall’s cooler temperatures, we’re getting into prime sherry season! In fact, the first time I wrote about Sherry on this blog was back in January of 2010 for a Wine Blogging Wednesday (remember Wine Blogging Wednesday? I do!) prompt about what wine goes with SNOW! I’d been introduced to Sherry at the European Wine Bloggers conference just a few months before, and I could definitely imagine sitting and sipping around the fire drinking a Gonzalez Byass Oloroso!

Oloroso means ‘scented’ in Spanish. Like all sherries, it’s aged oxidatively but for a longer time than a fino or amontillado, making it a darker and richer wine with alcohol levels between 18-20%, more alcoholic. Made with 75% Palomino and 25% Pedro X, in the glass, I described the one from Gonzalez Byass as colored like flat cherry cola becoming more tawny colored and pretty–orange pink sunset colors shifting as I swirled the glass and the dark amber liquid caught the light and  reminding me of a golden tiger eye.

Sherry comes in a variety of styles, ranging from the sweeter olorosos as described above to dry, light versions such as finos from the Palomino grape. At my first tasting at the European Wine Bloggers Conference, I experienced two more:

You can read more about the process of making sherry here, but in a nutshell, what makes sherry so distinctive as a wine is the way that it’s aged: each year a portion is taken out, and over the years, the wine is transferred from one barrel to another, combining older sherry with newer. Each year the sherry acquires a different name and different qualities depending also upon its exposure to air which oxidizes it or by its flor (yeast).

In 2016, the Wine Pairing Weekend crew took on Sherry pairings. There I wrote about a sherry that had been in my grandfather’s cellar for many many years. After my mother died, I lost access to the cellar, but before I did, I did  this photo shoot above. It was the perfect time to open that bottle of sherry. (I should have rescued the rest of the wine at the time; I think my sister threw it all out…sigh).

Read more about my grandfather’s cellar and a few other sherry stories in part one here and part two as well as sherry pairings.

To celebrate International Sherry Week, Sue and I opened up two from Gonzalez Byass which is located in Jerez, Spain, home to Sherry (the dark purple area in the southern part of Spain; map form wikipedia).

Nose: Butterscotch, vanilla, sage, bee pollen, hay or straw, there is a richness, hay that has been freshly bailed

Pairing: Great with the spiced nuts, what a great sipper while in front of the fire reading a great book and snacking with a snack of spiced nuts.

The nose and the finish is elegant and complex.

I made a pumpkin cake with cream cheese frosting but sherry yearns for something more savory with  a bit of sweetness. Not to say the spices did not go well, the lingering of the spices in the cake went well with the wine, but the sweetness did not enhance it.

What works? Spiced nuts which you can find at Trader Joes and just about anywhere these days; we had some fancy ones from Oregon that I saw at several wineries there. I’d also try poached pears or plums.

Pairing: This wine also went great with the spiced nuts. We felt that this too was not like a dessert wine. It wants savory foods with a bit of spice to enhance it. We took off the frosting of our pumpkin spiced cake and were much happier without the frosting, but it still wasn’t the absolute best. These wines want a lovely savory spice with just a hint of sweet to set it off.

At the end of the evening Sue and I decided that Sherry doesn’t really need a dessert. It is a dessert all on its own. A lovely end of the meal.

A rule of thumb is that the dessert cannot be sweeter than the wine. Neither one of us felt that this would be our go wine to accompany a dessert.

A few days after Sue and I tasted the sherry, I made a blackberry sauce to pair with merlot and flat iron steak and then pork loin and decided to use a dash sherry in it. WOW. What an incredible smell! And it added a delicious, rich  complexity that really enhanced the berries. I would definitely do that again!

Over the past few nights, I have revisited the sherry, sipping a little here and there slightly chilled in a white wine glass. There’s something about the passage of time that is reflected in the glass– it’s a very calming beverage and while the alcohol is high for wine, it is not as high as other beverages or cocktails.

If you are a sherry person, both of these wines are wonderful. If you are not a sherry person, the Amontillado is difficult to get to so you might want to start with the Palo Cortado as it is a bit smoother and easier to consume if you have never experienced sherry before.

We both wanted our cake to be better with our dessert, but we do not always make the mark on the first try.

After reviewing the Wine Pairing Weekend offerings from a few years ago, I’m excited to try some of these pairings! Check them out and see if you’re inspired to add sherry to your table!

Did you know aged rose is a thing? How about a rose from Provence with Cabernet Sauvignon? Check out there latest on Wine Predator for details about @chateauvignelaure !
Bye bye Mammoth! Thanks for a great birthday weekend!
Join me on a wine adventure in 2022! Please take the @trovatrip survey in my bio to help decide where we should go first!
Rhian Teasdale and Hester Chambers with Wet Leg performed for the first time in LA tonight!
Rhian Teasdale wailed on guitar tonight at The Echo in Echo Park in their first LA CA performance ever! Great show gals n guys!
Cooking paella on a hand built cob wood burning oven using grape vines.