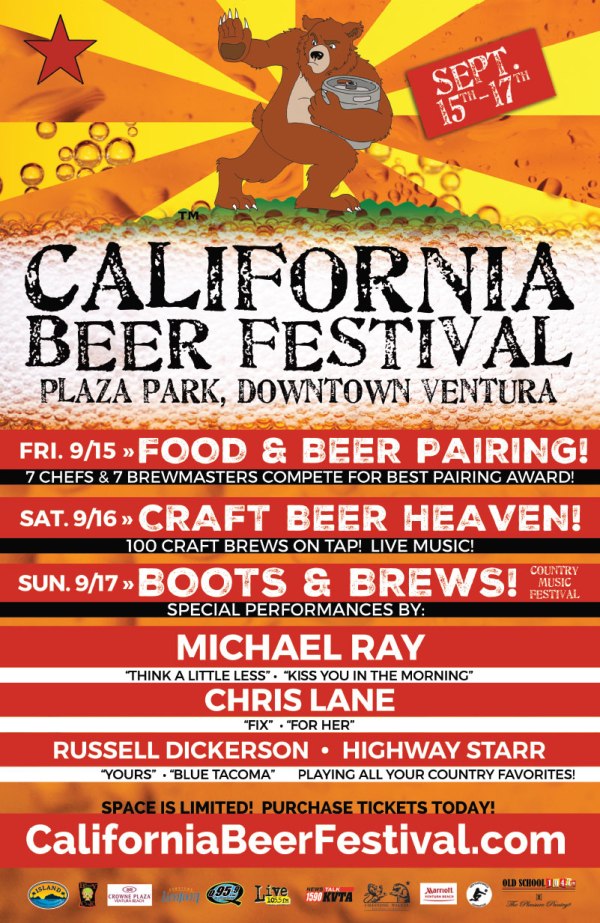 While September is California Wine Month — which we will get to soon here on Wine Predator with features of several Napa Valley wineries among others — this week is Ventura County Beer Week with the California Beer Festival to wrap it up!

Friday is all about craft beer and gourmet food pairings

while Saturday has 180+ beers on tap for your tasting experience, and Sunday is the Boots and Brews Festival with country music and beer on tap when the 9th annual California Beer Festival arrives in downtown Ventura California this weekend Sept. 15, 16 and 17 with three days of craft beer, food, and live music! This is a fundraiser for the Downtown Ventura Organization which keeps downtown clean and offers festive events, often free and family friendly, all year long.

FOOD AND BEER PAIRING COMPETITION
“Brew with a View”
Friday, September 15 5:30pm
Brewmasters and  Chefs compete for your palate with their beer and food pairings, and you get to vote for the best while enjoying live music near Ventura’s City Hall at the intersection of Poli and California Street.  Tickets are $60.

BOOTS AND BREWS FESTIVAL!
Sunday, September 17, 11:30am-6pm
Boots & Brew Country Music Festival is all about celebrating Friends, Boots, Craft Beer and Great Country Music! Grab your best dancing boots and get ready for an amazing Country lineup! Bring the family for a day filled with great country music, good food and craft beer in beautiful Plaza Park in Downtown Ventura! No food or beer is included with your ticket but available for purchase. All Ticket Sales are final, no refunds. Children 10 and under are free with an adult

Musical guests include Russell Dickerson — his “Yours” album debuted at #2 in the iTunes country store and #8 in all genres. The album also premiered at #1 on Billboard’s Heat Seeker chart and #14 on Billboard’s Top Country Album chart. Dickerson’s album landed on iTunes Best of 2015 year-end list, TheKnot.com’s Best Wedding Songs of 2016, and Spotify’s #SpotifySpotlight 2016!

After touring in the past year with Dustin Lynch, Florida Georgia Line and Rascal Flatts, Chris Lane’s been making a name for himself as one of the genre’s most groundbreaking new stars: his first single, “Fix,” topped the Country radio charts, has been certified GOLD in both the U.S. and Canada, and surpassed both 25.8 million streams on Spotify! Chris Lane is a great Addition to this years B&B Lineup!

Michael Ray’s debut single “Kiss You In The Morning” Went Number 1 On The Country Music Charts And His Followup Song “Think A Little Less” Also hit The Top Spot.