With Prosecco DOCG celebrating a thirtieth anniversary and with UNESCO proclaiming the Prosecco Hills of Conegliano and Valdobbiadene a World Heritage Site on July 8, there’s lots to celebrate about Prosecco on this Prosecco Day August 13 — and we know which bubbles to recommend as well! 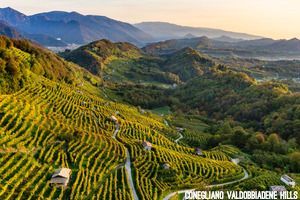 According to a press release, Innocente Nardi, President of the Consortium for the Protection of Conegliano Valdobbiadene Prosecco DOCG, expressed profound satisfaction and immense joy at the declaration, but pointed out that “this recognition should not be seen as a destination, but merely as an important step on a journey towards enhancing the cultural, artistic, and agricultural heritage of this small area, known for its principal product, Conegliano Valdobbiadene Prosecco Superiore.” 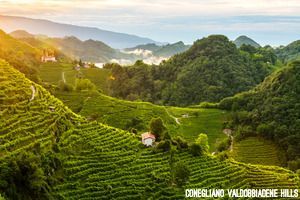 The nomination process took the typical tedious ten years to which Nardi said, “It is this enthusiasm and dedication that has enabled us to achieve our objective.”

Nardi credits the producers of the Consortium of Conegliano Valdobbiadene Prosecco DOCG: “Right from the beginning, and throughout the entire nomination process, they never wavered in their belief in the uniqueness of our landscape, with its vineyard-embroidered hills and inaccessible slopes that require such hard and entirely manual labour. It is the commitment of generations of wine producers working in the vineyards, forging the ‘patchworks’ that we see today, as well as the characteristic ‘ciglioni’ [small plots of vines on narrow grassy terraces] which distinguish our viticulture, and therefore our territory, that has led to UNESCO recognition.” 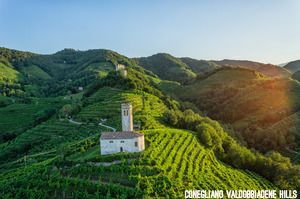 Nardi added, “As of today, it is the responsibility of us all, but first and foremost that of the Consortium for the Protection of Conegliano Valdobbiadene Prosecco DOCG, in harmony with the newly established site management association, to focus on the conservation and maintenance of the registered landscape assets, while paying particular attention to the UNESCO guidelines for their protection and enhancement for future generations, in accordance with the objectives aimed at achieving balanced and harmonious economic and social development.”

A management plan drawn up in agreement between all relevant private and public institutions within the region addresses sustainability to protect the local environment and its inhabitants with the controlled development of tourism. While there is a positive economic impact, tourism must be sustainably managed with an increase in travellers to the region.

The Hills of Conegliano and Valdobbiadene is the 10th site in the world to be registered under the category of “cultural landscape,” and is characterized by three unique attributes, based on different geomorphological and cultural characteristics, compared to the other eight territories (Alto Douro,Portugal; Tokaj,Hungary; Pico Island,Portugal; Lavaux,Switzerland; Langhe Roero and Monferrato, Italy; Champagne, France; Burgundy, France; Saint-Emilion, France; Wachau, Austria). All ten of these sites are “evolutionary cultural landscapes, visible results of the interaction – a vital, constantly evolving interaction-, between man and the environment.”

“I am extremely proud because UNESCO recognition is confirmation of the unique value of the Hills of Conegliano and Valdobbiadene landscape,” concluded Nardi.

The Consorzio di Tutela del Conegliano Valdobbiadene Prosecco Superiore DOCG, founded in 1962, guarantees and controls adherence to the production regulations for D.O.C.G. Conegliano Valdobbiadene Prosecco Superiore. The sparkling wines produced on the hillsides between Conegliano and Valdobbiadene, in the Province of Treviso, obtained Denominazione di Origine Controllata status in 1969 and the Denominazione di Origine Controllata e Garantita in 2009. The production zone includes 15 municipal areas: Conegliano, San Vendemiano, Colle Umberto, Vittorio Veneto, Tarzo, Cison di Valmarino, San Pietro di Feletto, Refrontolo, Susegana, Pieve di Soligo, Farra di Soligo, Follina, Miane, Vidor and Valdobbiadene. The Consortium groups together 185 sparkling wine producers and includes all the categories in the production chain (vine-growers as well as vinifying and bottling companies). It operates principally in three areas: protection of the product, its promotion, and sustainability of production. It carries out these tasks both in Italy and abroad, promoting knowledge of the product through educational activities, the organization of events and relations with the press. Connect with the Consorzio on Facebook, Twitter and Instagram, or visit prosecco.it to learn more about the region and its sparkling wines.

For a celebration dinner, Sue came up with a menu of a simple salad and a delicious dessert from the region of North East Italy, which is home to Prosecco. We also made a regional cocktail, the Hugo, which uses elderflower liquor and soda water for a lively yet low alcohol refreshing beverage.

The name “Rustico” refers “to the old local tradition of making wine using short second fermentation in the bottle and leaving the sediments in the wine. Although no longer the technique, the name has remained and is considered to be a brand name.”  The glera grapes were pressed, de-stemmed, cooled, and fermented in steel temperature controlled tanks with a second fermentation in “cuve close” then aged in the bottle. 4000 cases were produced.

Perlage: Very bubbly, which is what you want if you are going to create a cocktail with it. Nice, very foamy. many little tiny bubbles, gentle.

Nose is full of florals, citrus, pear, minerality, this is a very expressive on the nose. Citrus and pear comes through on the palate as well as the bracing acidity.

The prosecco cocktail is a perfect greeter. Then follow up with a glass of prosecco to go with the arugula salad The Hugo, which is very light does not mask the beautiful notes of the prosecco; it is subtle and refreshing. So much of this drink is about the quality of the prosecco which is not masked.

Pairing: We paired this cocktail with an arugula salad with rye cracker croutons and pine nuts, dressed with a cider vinegar, olive oil, topped with smoked ham and goat cheese roll ups.

This cocktail pairs so nice with the arugula in the salad. What a great summer lunch. The salad went great with the cocktail, and the prosecco itself.

For dessert, we paired the prosecco with a strawberry dumpling with cinnamon whipped cream.

If people in a restaurant knew about this, they may forgo the lava cake. It satisfies the sweet tooth, and the dumpling satisfies the umami factor: both sensations are satisfied in one.

Read more about Prosecco pairings here. from me and others in the #ItalianFWT group: