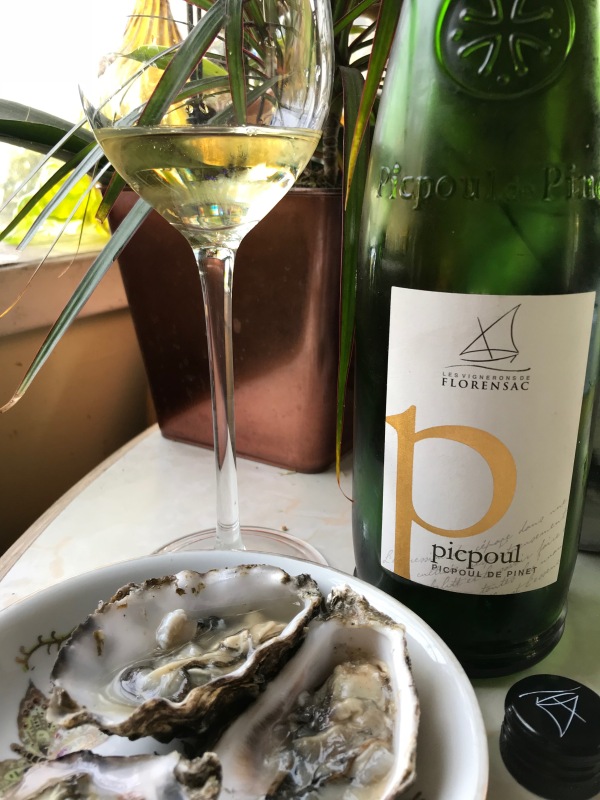 Not too familiar with Picpoul? We’re not either but we’re learning!

After two outings in two months with this zesty, racy grape, we’re fast fans of this super acidic grape that is one of the thirteen allowed blending grapes in the Rhone’s Châteauneuf-du-Pape.

Picpoul is also grown south of the Rhone in the Languedoc region, where it is one of the oldest domestic grape varieties.  Because of its susceptibility to fungal diseases like powdery mildew and because it is low yielding, it fell out of favor,

But it is starting to show up in California thanks to Tablas Creek’s connections. Also known as “Piquepoul” among other names, it is being grown in southern Arizona at 5000 feet in the foothills of the Chiricahua Mountains Wilcox AVA . (Now THAT is an AVA after my own heart and definitely now on my radar– there’s some awesome birding there and wine? Bet there’s spring wildflowers going off too!), Iy’s also being grown in the Red Mountain AVA of eastern Washington State, in Sonoma, in Texas, and most recently in Australia! Sounds like it thrives in heat!

Last month, we tasted and wrote about Acquiesce’s ‘s picpoul and picpoul blend from Lodi. I know most people probably don’t think of Lodi as a cutting edge region for white wines, but Sue Tipton loves Rhone whites and specializes in them. When I visited her last June, I was fascinated and thrilled by this wine as well as her white blend that includes Picpoul so in anticipation of this month’s Winophiles investigation of the grape and how to pair it as well as our March focus on women who make wine, we broke into my stash.

That plus Sue’s research that suggested rich seafood with creamy sauces directed what to pair with these wines. When Sue saw the Wine Enthusiast March issue had a recipe for Crispy Soft Shell Crab, with Creamed Copes Corn, and Hot Sauce Beurre Blanc, we both thought that sounded delicious especially after last spring’s Beuerre Blanc and Chablis dinner! (Okay there were other things like lobster but the beurre blanc stole the show for me! So you KNOW we will be making this sometime soon — maybe with the 2015 Crozes-Hermitage “Les Meysonniers” Blanc that was sent by accident last month?)

But locating soft shell crab turned out to be too big of a challenge for either of us considering our challenging weeks and we just didn’t want to sub with fish so while that would have been a great pair, since we were not able to follow through with that recipe, Sue felt that shrimp and grits would be similar enough and that it would be a fun, similar, simple, and rewarding recipe since we were both ready for some “comfort” food!

Sue told me that if I wanted oysters I’d have to pick them up. As it had been an insanely busy week, I just wanted to head up to her house Friday after a work retreat (yep that was supposed to be relaxing but no, not even close with the week and day I had! At least I didn’t have to prepare breakfast or lunch and it was close enough to my house that I could run back and forth three times during the retreat…)

Anyway, so I passed on getting oysters, but once I tasted the wines, I got in my car and headed to Ojai’s West Ridge Market for them where I also picked up some housemade sausages for good measure to go with the red wines for our post about Tax Day wines.

What a delicious meal and great wines for a fun Friday with friends! 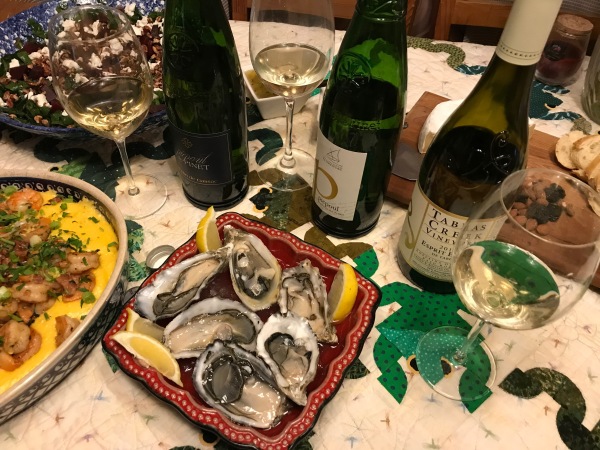 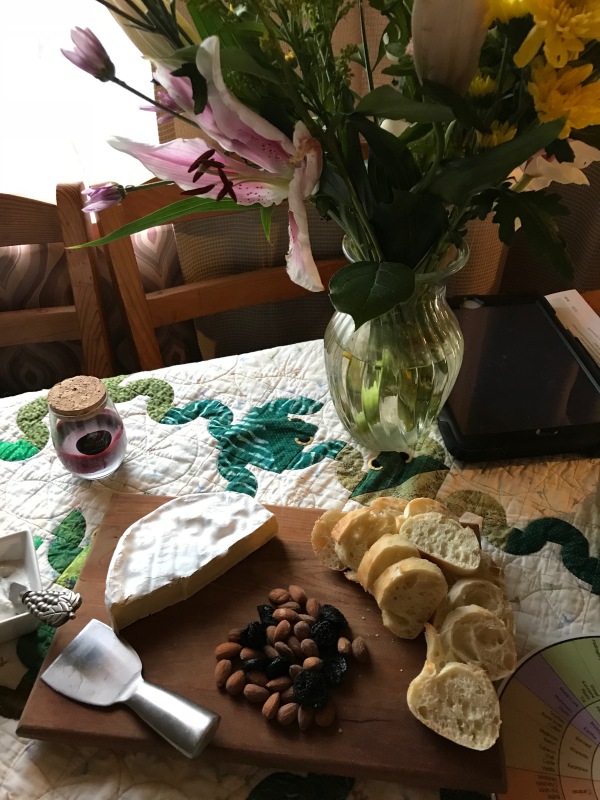 We found that these wines would be great picnic wines– think chicken salad. 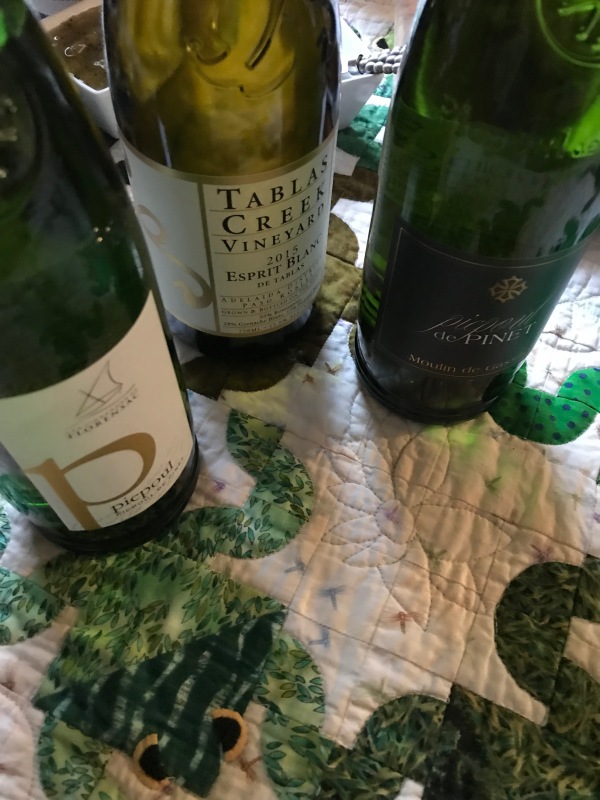 With oysters, the wine prepares your palette for the oyster, and the oyster receives the wine so nicely. With the shrimp and grits, this was a perfect pairing, the creaminess cuts through the racy acidity. They balance each other so beautifully. Sue felt that the wine paired very nicely with the chard salad also. The citrus and honey in the vinaigrette went well with the wine; the chard has a lot of acidity, and the picpoul flies over everything — it is like a party in your mouth. They neutralize everything and get along so well together.  The salad matched the racy acidity of the wine.

John did not want to move on to the second Picpoul; he kept on with this one because it tasted so good! 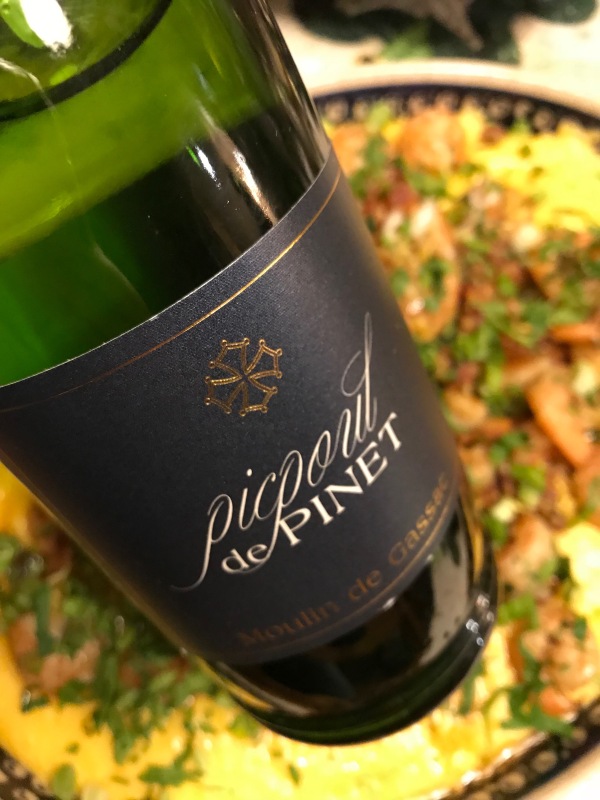 We thought both picpoul wines were very similar in character and taste, but when you spend time with them side by side you start to notice the differences in each.

Palate: smoother, lingering finish, flavor more on the back palate.

Surprisingly, as well as the other picpoul went with the dish, this one fought the shrimp and grits.

This wine was fine with the salad and shrimp and grits etc, but the other wine was better with our meal tonight. 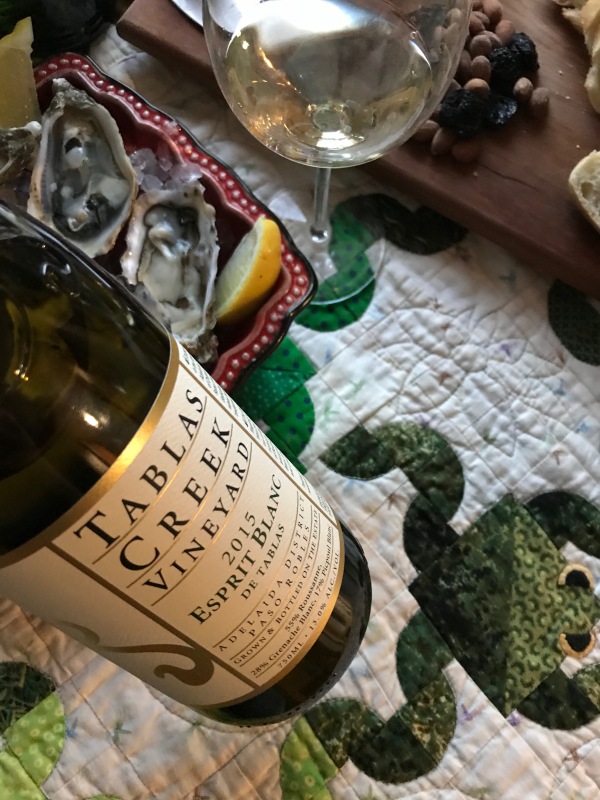 As Sue was in the Paso Robles area over Spring break, and she had heard that Tablas Creek Vineyard makes a terrific Picpoul so she made a point of going to the tasting room where she learned the Picpoul was sold out, and the next vintage will be released around June. However, she was able to taste the Esprit Blanc de Tablas with Picpoul in it. She liked it so much she purchased a bottle for this Picpoul tasting.

As this is Earth Month, I’d like to point out that Tablas Creek is a leader in so many ways in California: bringing in Rhone grapes like picpoul certainly is awesome, but they are not only organic but biodynamic and will be participating in next month’s International Biodynamic Wine Conference in San Francisco and pouring at the Monday night tasting that is open to the public.

Nose:  Honeycomb, honeysuckle; this is a lovely, complex interesting wine.

Palate: Such a smooth mouthfeel, really well-balanced, twice the price, twice the pleasure. This is a decadent, wonderful wine that also went perfectly with the meal. The creamy richness of the shrimp brought out a lovely sweetness in the wine.

John liked this with the salad, again it brings out a sweetness in the wine; it really went with the beets! This wine liked the bacon with the shrimp: the richness of the meal married nicely with this blend. 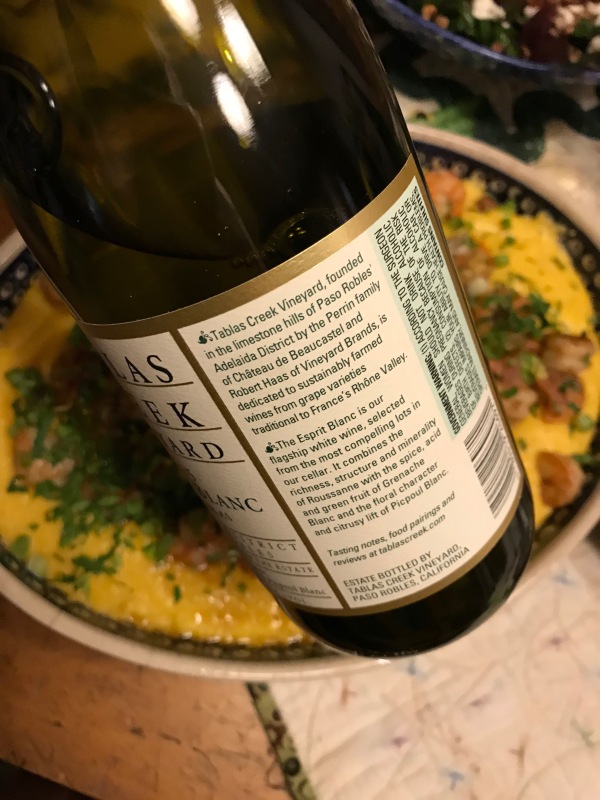 Because onions and I are not great friends, Sue put the bright green scallions on top instead of cooking them in. Pretty and much easier for me to pick out although I wouldn’t have protested those especially cooked in with the garlic AND SHRIMP COOKED IN BACON? Where has that idea been all my life! Once you’ve had shrimp cooked in bacon, you may never go back.

Watch how to make this recipe.

Bring water to a boil. Add salt and pepper. Add grits and cook until water is absorbed, about 20 to 25 minutes. Remove from heat and stir in butter and cheese.

Live #Winophiles Twitter Chat April 21, 11 a.m. ET: Participating bloggers and anyone interested in the subject will connect via a live Twitter chat using the hashtag #Winophiles. Check out the following blog posts anytime to learn moe about Picpoul and Pairings.

22 thoughts on “Picpoul Goes Southern Style with Shrimp and Grits”