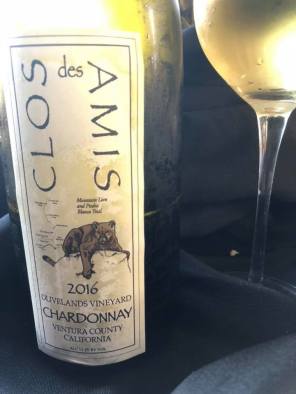 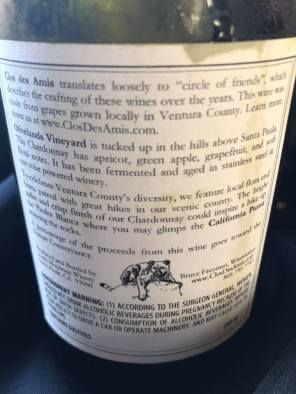 In 2017 and 2018, devastating fires hit wine growing regions of the world, making headlines, destroying lives, and wreaking havoc on the industry.

Just over a year ago, after almost a month, the fires in Napa and Sonoma were finally contained.

Too worried and Couldn’t sleep so took the dog on a walk to see for myself: #ThomasFire so much worse than I thought so eerie — downtown @visitVentura near my home. pic.twitter.com/JA5ky62ApV

A few weeks later, the largest fire in California’s history broke out on Monday night December 4 in Ventura Country not far from my home. Read more about the Thomas Fire here.

As in Northern California, thousands lost their homes in Ventura and Santa Barbara County, and vines were damaged and destroyed as well as winery resources and buildings as I briefly discuss in this post.

The Thomas Fire burned most of what is seen on this map as brown rugged mountains; the fire also encroached onto much of the green and surrounded the Ojai Valley.

The Thomas Fire began near Thomas Aquinas College in Santa Paula on highway 33 which leads to Ojai. While the solar powered adobe winery building for Clos de Amis and vineyards are located on South Mountain across the Santa Clara rivershed, winemaker Bruce Freeman’s home was up 150, and a number of winery resources were lost in a burned outbuilding. Bruce has been instrumental in growing the resurgence of grape growing in Ventura County, including planting Chardonnay close to the site of the fire in Santa Paula. Read more about our visit to Clos de Amis here.

Weeks of evacuation and uncertainty makes it hard to stay focused on anything, much less winery business.

Within a few days, the wind whipped fire, aided by several years of drought conditions and high temperatures, had encircled Ojai:

The Thomas Fire’s record lasted only months when surpassed this past summer by an even more massive fire in northern California that hit wine growing regions in Lake and Mendocino counties.

With the onset of climate change, raging fires around the world strike wine regions with a vengeance. The same factors that make an area great for growing wine grapes also means great conditions for fire: dry and hot. 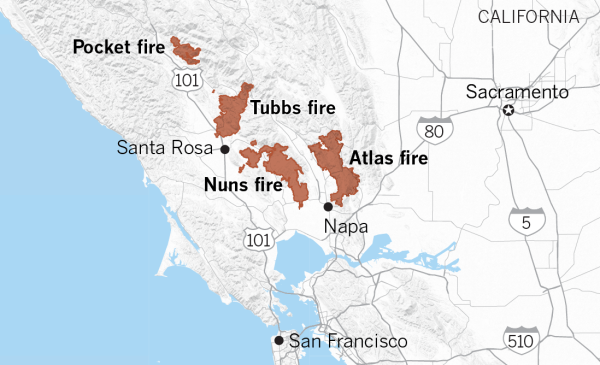 The extent of the 2017 fires in the Napa and Sonoma areas; more than 7500 buildings were destroyed.

While in the United States most are well aware of the California wine country fires of 2017 and 2018, fewer people know that in January of 2017, 300 acres of vines burned in Chile — many of them very old vines grown by small family farmers without the resources to fight the fires which raged in nearby timber forests.

At the same time that Napa and Sonoma were burning in October of 2017, so was Portugal and Spain. Thousands of people in Portugal and Spain evacuated when dozens of wildfires hit injuring many killing at least 45 people, and destroying wineries and homes in the Dão region of Portugal and in the Rías Baixas area of Spain. An Oct 23, 2017 article in Wine Spectator reports:

“The smoke was crazy,” said Miguel Roquette of Quinta do Crasto in Portugal’s Douro Valley. “You couldn’t see the vines—anything. You needed your lights on to drive at mid-day.”

With dry conditions and high winds with gusts of 60 miles per hour, 6,000 firefighters were deployed and a state of emergency declared over the entire northern half of Portugal.

In Dão and Rías Baixas, some vines burned even with grape growers fighting the fire with garden hoses. Wine Spectator says that local media reported the owners of Rías Baixas estate Pazo de Señoras evacuated.but returned to find that the fires stayed away from the historic property.

Read more about the fires in Spain and Portugal in this New York Times article where the map above came from.

Fortunately the fires in 2017 occurred after much of the fruit was harvested — which meant that most of the fruit wasn’t damaged directly by the fire or indirectly from smoke taint which can make wines made from the grapes taste strongly or faintly of the inside of an ashtray and worse.

Excessive heat, ash and smoke impacts the grapes which may keep them from meeting quality standards. Tests measure guaiacol, 4-methylguaiacol and other markers to determine smoke taint and the risk that the grapes might be damaged and could impact the quality of the grapes.

Unfortunately, the record-breaking fire in Mendocino and Lake counties of 2018 occurred before harvest had even begun, which has led some wineries to reject fruit grown under contract for them because of smoke taint.

A September 2018 article in the Wine Business quotes Clark Smith, a winemaker and consultant with WineSmith Wines and Spirits in Sonoma County which represents a task force of wine industry professionals focusing on grape smoke damage assessment, mitigation, and treatment. According to the article, “Smith strongly questions the thresholds used by large wine companies like Constellation to reject fruit, saying there is no reason to believe these grapes are not good.

“What we’re going to end up with is a whole lot of grapes that might make really good wine, but we just don’t know,” Smith said in the article. He also claims that “there is no clear definition of smoke taint and only partial understanding of the chemistry.”

This November, we all have a great deal to be grateful for. These fires could have been much worse. Many more people could have died. Vineyards protected properties. People came together and helped each other, forming alliances and communities where before none existed, and finding unexpected strengths.

I absolutely love the Chardonnay from Clos des Amis; it’s under $20 and so good with seafood. The nose is expressive and full of fruit for a Chardonnay, and on the palate it’s bright and crisp. 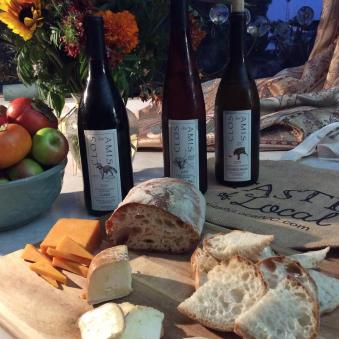 6 thoughts on “Together We Rise: Wines from Fire Struck Regions in CA, Chile, Spain, Portugal — A #WinePW Invitation”