the Albariño Wine Festival held during the first week of every August in in the small coastal town of Cambados, Spain,  International Albariño Day 2014 is set for Saturday, August 2.

Traditionally grown in Rías Baixas, a coastal wine region in Galicia in northwestern Spain where over 90% of the vineyards are Albariño, this grape produces aromatic, tart, bright, acidic white wines with citrus fruits and white flowers that pair particularly well with seafood but also works with Asian foods that aren’t too spicy.

Here’s a write-up of Paco and Lola which I opened for last year’s Albarino Day.

While grown in great volumes in Spain as well as in Portugal as Alvarinho, Albarino is less commonly found  in other parts of the world but increasing in popularity.

In California, the Lodi AVA is now California’s leading grower of the grape. If you’re in the Lodi area this weekend, you should head over to Twisted Oak Winery in Murphys, Calveras County, to taste their very limited release Albarino–only 50 cases. (Be sure to visit the Spaniard while you are there too!) 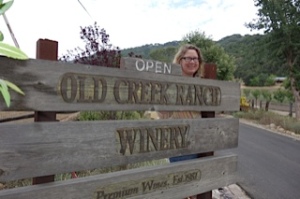 For Albarino Day, I may open up Old Creek Ranch Winery’s 2011 Albarino de Moto made from fruit grown in the Paragon Vineyard (lucky me–I had two bottles in my cellar!). If we’re feeling ambitious, we might make a paella; if we’re not, we’ll get some manila clams from the Jolly Oyster at the Ventura State Beach (and some oysters too of course!)

In anticipation of Albarino Day, when friends invited us to dinner the other night, I brought over the 2011 Albarino de Moto as our children go to school with the winemaker’s daughter.  We found plenty of citrus, mostly  lime and lemon,  plus fresh crisp white stone fruit (think not quite ripe white peach). Very clean, dry, long  refreshing finish–almost like sucking on a stone while hiking.Serve cold in a Sauvignon blanc glass to concentrate the aromas and deliver the citrus to your palate.

We enjoyed the wine with a salad of field greens, beets, goat cheese, and walnuts with a splash of balsamic vinegar and olive oil, then with the main course of a coconut milk and Thai curry stir fry with chicken that was only lightly spiced. The wine contrasted with the creamy stir fry making the wine more crisp and the food more rich. It also brought out the sweetness in the meal.

This wine will please the acid freaks in the house, but not freak out the non-acid freaks, and definitely delight any ABCers you may know.  The acid is what makes it a ruf and tuf road to ride but don’t let that scare you off: it’ll tame you down on a summer afternoon on the patio with goat cheese and crackers, olive tapenade, hummous, and crunchy baguette.

While the 2011 is sold out, the 2012 Albariño de Moto, 100% Albariño, Paragon Vineyard  (San Luis Obispo County)   is available! Winemaker’s notes say that this year’s is “showy, with aromatic bursts of lemon curd, limeade, white nectarine and hints of wet stone and kiwi.  Slightly fuller in the mouth than last year’s, this wine packs citrusy flavors of tangerine, grapefruit and Meyer lemon along with hints of tropical, fresh guava.” $22.00.

By the way, Old Creek Ranch is for sale! More on this in a post to come…

Other options for Albarino Day in the California Central Coast include:

Ballard:  Chef Budi Kazali of the Ballard Inn will feature a special course paired with Albariños from Longoria Wines and Verdad.

Santa Ynez: Chefs Matt & Jeff Nichols of The Red Barn will feature a special course to be paired with the same two wines.

If you’re in Oregon,

I’m sure there are many more activities and events–theses are just the few I know about.

Don’t want to travel? All you need to do to celebrate Albarino Day is open a bottle and enjoy! Share your tasting notes and pairings via social media using the hashtags #albarinoday and #albarinofiesta.