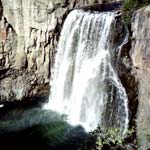 . Now he never wants to leave!

Today we hiked from our campsite near the hot springs shower to the store and café to check it out. We’d heard from the PCTers and JMTers that the food in the café was good, especially the homemade pie! The boy wants to go fishing, so we need to get some tackle—maybe a pole, certainly some hooks and bait. Plus we need ice!

The trail to the store area leaves the campsite near the showers, climbs a little, traverses the hillside above the meadow, and crosses two small creeks before dropping to the small cabins and motel rooms available to rent. It’s an easy walk and offers views of the meadow, the granitic outcroppings, and lots of wildflowers beside, below, and above the trail including one of my favorites, leopard lilies, a striking orange spire against the green backdrop.

The store sells the usual back country goods—cold beer, ice, souveniers, dried goods, fishing poles, and various kinds of necessary tackle. Since it’s the idea of fishing that attracts the 4 year old, we pass on the $40 fishing pole when I convince him we could do it the old fashioned way with a stick, line, hooks and bait. As he’d already been collecting “fishing poles,” he went with it.

We passed by the crowded café and returned to camp, where we packed up for a hike to Rainbow Falls—bringing along our new fishing gear of course! It’s a quick walk from our campsite to the trailhead, then a 1.5 mile hike to Rainbow Falls, where the San Joaquin River drops 101’ over a cliff of volcanic rock.

The slightly overcast afternoon makes for pleasantly cool hiking through a region which was thoroughly burned in 1992, however, without the sun shining through the spray splashing up from the falls, we don’t see its famous rainbow. The view itself offers plenty of reward, and we continue down a flight of steep stairs, carefully navigating rocks, some slippery, to get to the bottom where the San Joaquin roars so loud we can barely hear each other. The boy wants to fish but we explain that the fish wouldn’t like the swift, rumbling current.

In fact, because of the falls, trout are not native above them; the plentiful fish there are all stocked, with some 300,000 more this year thanks to 2005 legislation which dedicated a portion of fishing license fees to inland fishery and hatchery programs.

Above the falls, we find a great fishing hole, and the Big Monkey ties the line to the stick and baits the hook with salmon eggs. We venture out across the rocky shallows to a boulder where we perch and cast the line out into the rapidly flowing stream. It doesn’t go far, and the bait quickly disappears off the hook. When we were doing the Pacific Crest Trail along the John Muir Trail section, my former husband caught quite a few fish using this same technique of a line on a stick when his fishing pole didn’t show up at Kennedy Meadows by the time we were ready to hike on north. Maybe we had better luck since we used “live” bait–ants and other insects we caught and used as we lacked other bait sources.

“Something ate it!” exclaims the boy. “A fish ate it! Let’s catch him!”

So we try again and again until it’s time to head back for a steak dinner with a bottle of Lengs & Cooter “Victor” 2005 shiraz. It may not be fresh trout, but I am sure it will be yummy! Tomorrow, after our ranger led hike to Devils Postpile, maybe we’ll catch a fish!